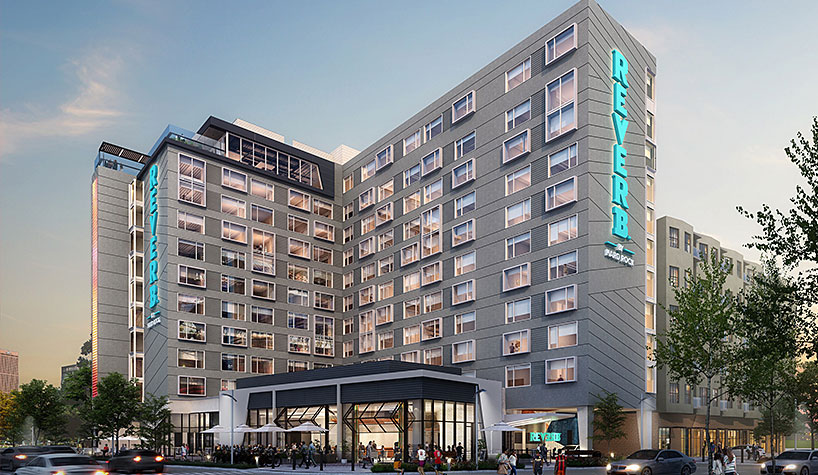 NATIONAL REPORT—A number of hotel projects are in the works below the Mason-Dixon line, including firsts for Hard Rock and Margaritaville.

Hotel Equities (HE) and Bolton Atlanta LP have partnered to open and operate Reverb by Hard Rock Hotel Downtown Atlanta, the inaugural hotel for Hard Rock’s entrance into the select-service category. The 197-room hotel is located adjacent to Mercedes-Benz stadium in downtown Atlanta. Construction is on schedule for a February 2020 opening.

Margaritaville Holdings celebrated the groundbreaking of its first Compass by Margaritaville Hotels & Resorts property on Anna Maria Sound in Bradenton, FL. Slated to open in early 2020, the 123-room hotel will be located adjacent to One Particular Harbour on the community’s recently opened deep-water marina, and have a six-story building and resort pool with room to expand in the future.

Four Seasons Hotels and Resorts, Congress Group and AECOM Capital, have partnered to bring a Four Seasons Hotel and Private Residences to Nashville, TN. A groundbreaking for the development, which will be the first Four Seasons in Tennessee, is expected next month. The property will include a five-star, full-service luxury hotel with 236 keys, a spa and an array of fitness amenities. In addition, the building will offer for sale luxury residences to be managed by Four Seasons.

Best Western Hotels & Resorts recently broke ground on its upscale boutique hotel brand—Vib—in Orlando, FL. The 118-room Vib Orlando will have a combination of modern design and affordable style, with social engagement at the center of the experience. The hotel will have a rooftop pool, juice bar and a grab-n-go retail store.

Chartwell Hospitality LLC has broken ground on the 150-room SpringHill Suites by Marriott in Franklin, TN’s Cool Springs neighborhood. The property is the hotel component of McEwen Northside, a mixed-use project to include retail offerings, office space and multifamily residences. Construction on the all-suite hotel is expected to be completed by spring 2020.

The Kessler Collection recently held a topping out ceremony for the Grand Bohemian Hotel Charlotte development in North Carolina. Set to debut in early 2020, the 254-room hotel will have 32 suites, a signature Poseidon Spa, indoor and outdoor event spaces, an open kitchen restaurant concept and lounge, and a rooftop bar.

Marriott expands South Asia footprint with 22 signings On the heels of the 16th Hotel Investment Conference—South Asia (HICSA 2021), Marriott International has signed…
Accor expands in South Korea Accor has revealed that it will be increasing its presence in South Korea in the next…
Four Seasons opens in New Orleans; more debuts down South Recent openings in the Southern U.S. include a Four Seasons in New Orleans, the first JW…
Four New Projects in the South NATIONAL REPORT—A number of hotels are being built throughout the South, including a repurposing of a…