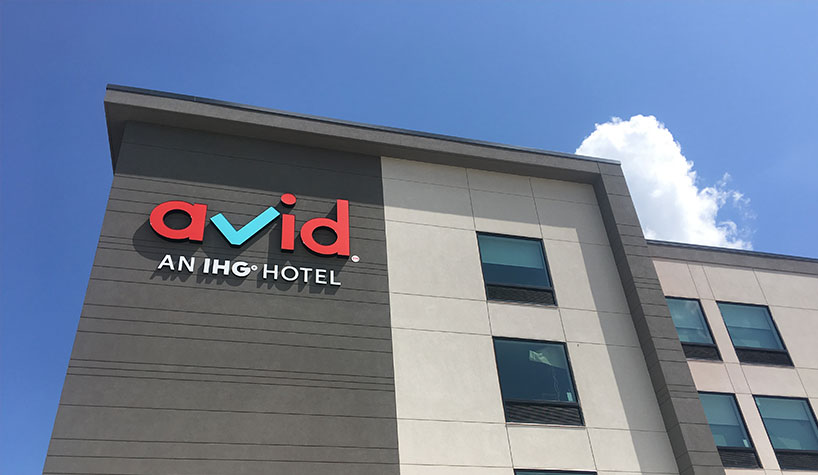 The brand has nearly 50 projects approved for planning or currently under construction.

IHG has officially opened its first Avid Hotel after launching the brand a year ago, with the Avid Hotel Oklahoma City-Quail Springs. Hotel Business was on the scene for a hard-hat tour of the new property.

The 87-room hotel is owned and operated by Champion Hotels, a privately owned hotel operator in the U.S. It opened 199 days after groundbreaking.

“Opening our first Avid Hotels property less than a year after the brand launch is an important milestone for IHG,” said Elie Maalouf, CEO, the Americas, IHG. “We worked closely with our owner advisory board, including leading owners such as Champion Hotels, to develop a brand that is just right for both guests and owners. The strong momentum of Avid Hotels, with more than 130 hotel deals already signed across the U.S., Canada and Mexico, firmly positions the brand as a long-term driver of growth for IHG in the Americas.”

Champ Patel, president of Champion Hotels, added: “We have been involved with the development of Avid Hotels from the very beginning and the IHG team listened to feedback from the owner advisory board to ensure the Avid brand will be compelling for owners, and for travelers looking for a high-quality stay experience. Because of this, we believe in the strength of the Avid Hotels brand and are proud to open the first hotel in Oklahoma City.”

The Hoxton, Williamsburg will open its doors this September in Brooklyn, NY. It marks the first U.S. outpost of the brand, which has a rapid North American expansion plan with two further openings: The Hoxton, Portland and The Hoxton, Downtown LA coming later this year, followed by The Hoxton, Chicago early next year.

The hotel is located on the site of the former Rosenwach factory, the maker of the wooden water towers that scatter the New York skyline. The hotel will have 175 rooms, three restaurants, a rooftop with views of Manhattan, public spaces and The Apartment, a distinctive meeting and events space that will be home to The Hoxton’s rolling cultural events program, which highlights the good and the great in each city.

The bedrooms, designed by Ennismore Design Studio, are spread across three categories: Cosy, Cosy with a View, and Roomy. Guests opting for a view can choose from the Brooklyn view or the Manhattan skyline. Brass details feature throughout, in contrast to raw concrete ceilings and mohair headboards in sage green, port and navy. Local ceramics can be found on the shelves; books are curated by local residents as part of the Hox Friends program, and bespoke bed linen has been created by local Brooklyn designer Dusen Dusen.

Construction on the hotel began in spring 2017. Located in Snowmass Base Village adjacent to the Elk Camp Gondola, the hotel will provide guests with ski-in/ski-out access as well as proximity to Snowmass’ shops and attractions.

The property will have 99 guestrooms, a lobby lounge with bar and restaurant, a conference space, private dining room, spa pools, a children’s game area and fitness facilities. Colorado’s largest indoor rock-realistic climbing wall, at 54-ft. high, will dominate the facade of the new hotel. A total of 11 private residences will be located primarily on the fifth floor with one residential unit on the second, third and fourth floor, ranging in size from two to three bedrooms and with views and high-level finishes.