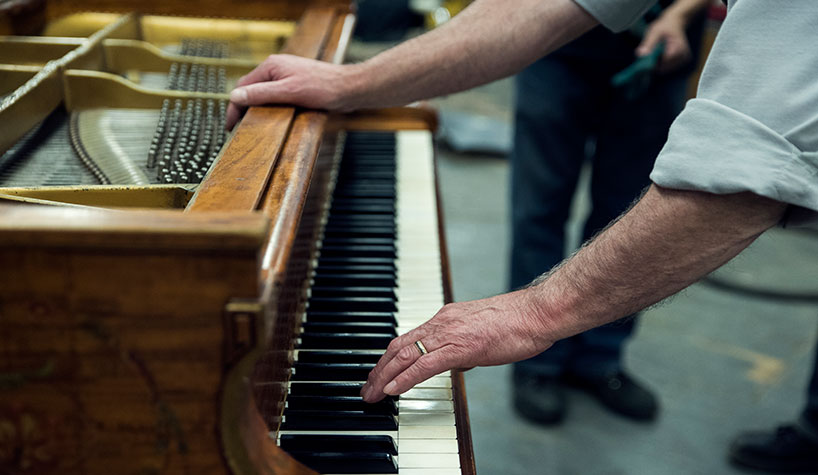 Composer Cole Porter’s piano is among the treasures on display at the New-York Historical Society.

“We partnered with New-York Historical Society to provide an interim home and publicly display the hotel’s most treasured artifacts until its reopening in 2021,” said Andrew Miller, executive director of development at Anbang, which owns the Waldorf Astoria New York. “Prior to its arrival to the museum, a meticulous restoration of the Cole Porter Piano took place at the Steinway & Sons factory in Astoria, Queens, NY. The clock and rocking chair were evaluated by experts and have undergone delicate and careful cleaning.”

The Waldorf Astoria New York’s archive is mostly made up of documents, photographs, small objects and other important items from throughout the hotel’s history, including the original hotel, which was located on the site of the Empire State Building. It was vital to find an exceptional interim home for these artifacts.

“There are thousands of items and documents in the archives, which are being preserved for future access and use,” said Miller. “We have partnered with the New-York Historical Society to display three of the most important objects in the collection, which are of great historical and social importance. The Cole Porter Steinway Piano was housed in Cole Porter’s lavish apartment in the Waldorf Towers. Following his death in 1964, the piano remained at the hotel where pianists played this iconic instrument. One of the property’s signature focal points, the World’s Fair Clock Tower, was purchased by John Jacob Astor IV for display in the original Waldorf Hotel. It has served as an inspiration for hotels around the world. President Kennedy’s famous upholstered rocking chair was housed in the infamous Presidential Suite at Waldorf Astoria New York.”

While the property is undergoing renovations, it was important to Miller and the teams for the public to have an opportunity to view and enjoy these pieces, and that they were not crated up in a warehouse.

“The piano will be played, and the clock will chime. They deserve to be enjoyed, and we are thrilled to have provided for the public to see and hear them this spring,” he said. “There will be special programming surrounding the Cole Porter Piano and World Fair Clock, creating new memories before they are returned to the hotel.”

Reflecting on the moment, Miller is reverential of the history of the iconic hotel and its artifacts.

“It’s an honor to showcase some of the history that has helped establish the hotel as the pinnacle of luxury travel and living,” he said. “This hotel is filled with national treasures that are deeply rooted in the heritage of the hotel, and we look forward to opening our doors to the public to give guests an opportunity to visit one of New York’s most iconic architectural wonders.”

Hilton Los Cabos Beach & Golf Resort Completes Renovation by Hotel Business LOS CABOS, MEXICO—Hilton Los Cabos Beach & Golf Resort has completed a multi-million dollar renovation. The…
McKibbon Places Launched for Third-Party Development and Renovation by Hotel Business ATLANTA—In what it calls “an initiative to sharpen the focus of its third-party hotel development and…
At the Palms Casino, Jon Gray Talks $690M Renovation by [email protected] LAS VEGAS—Meet Jon Gray, the youngest VP and GM on the Vegas Strip, who also just…
How to Manage the Hotel Renovation Cycle by [email protected] PLAINFIELD, IL—What are the warning signs of a hotel overdue for a renovation? A dated, damaged…