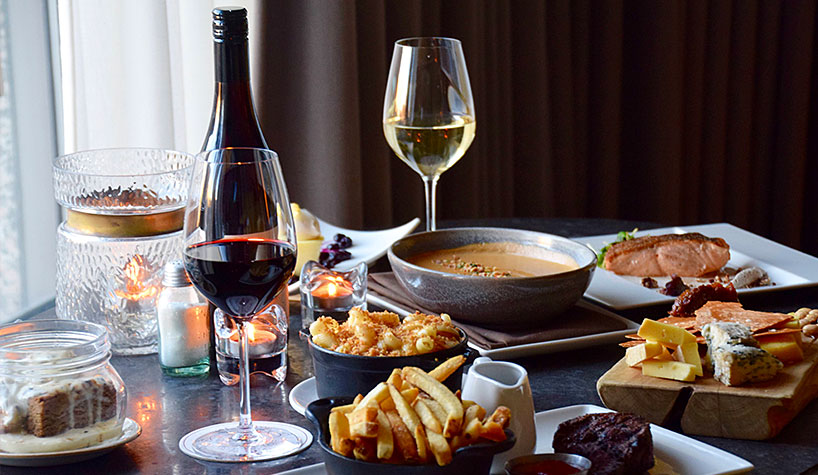 With the social distancing restraints enacted by governments across the country, restaurants located in hotels were hit as hard—or even harder—than other food and beverage operations.

To help make up for losses to the bottom line, two hotel restaurants in Philadelphia came up with a similar idea to offer meals to guests—but with added special hotel service.

“We have taken a tremendous financial hit,” said Nathan Ayres, general manager of food and beverage at The Logan Hotel, which operates Urban Farmer restaurant on premises. “Specifically, the Philadelphia market has some of the strictest restrictions put on indoor and outdoor dining and what we are allowed to do. I was blessed with a property that for each kind of turn for this pandemic has a leadership team and spaces that are able to meet the needs of our different markets, but also keep everyone safe, which is our top concern for our staff and for our guests. We have done a lot of different things that have allowed us to pivot as a business.”

Like many hotels, the property introduced pick-up and delivery packages for everyday and holidays. While that helped to meet the bottom line, Ayres felt it was missing something. “It really misses the mark for experiences for the brand and for the consumer,” he said. “They still want great food, but what people are really missing during each of these levels of change is that experience that connects you with food and the people around you. Knowing that we shifted away from business travelers and corporate groups as they fell to a standstill, we knew we had to shift gears and really focus on the social engagement of the local and drive-in market around us. That is where we started focusing as a team on different driving experiences that could hit a number of different things that people were looking for during this last year.”

The hotel has found a great deal of success with what it calls Date-Night packages. “We thought of what the next thing that people were looking for and it was couples wanting to take back their weekend tradition of going out to a restaurant, but feeling safe in this environment,” he said.

Urban Farmer offered three-course meals in the privacy of a suite with an overnight stay. “That was the base package,” said Ayres. “From there, they could do a lot of different add-ons from private butlers, a bartender and cart who would come up and create your cocktails right in front of you at the door and additional fee programming as well. Within a week of putting it out there, we were booked every weekend in all the suites that we had available for every Friday and Saturday night.”

Erik Travers, general manager at the Red Owl Tavern at Hotel Monaco, a Kimpton Hotel, introduced a similar concept at his property. He got the idea from when his parents visited him from out of town. “When my parents came, we essentially stayed in the house for a week because they weren’t comfortable going out to dinner or to do anything,” he said. “I was thinking of how we could get it so people feel more comfortable, but still have that safety. We came up with this and we have had success.”

With Dinner with a View, parties of two or four enjoy a three-course meal with a bottle of wine in a room with a table by the windows overlooking Independence Park. “We understand that not everyone is as comfortable dining in a restaurant quite yet, be it that they have pre-existing conditions or whatnot,” he said. “We also have some guestrooms that are also not quite being utilized to the fullest because we are not at 100% capacity.”

Travers said that the reaction has been “tremendous.” “Over the [Presidents’ Day] holiday weekend, that was a big one for us,” he said. “We ended up selling seven on Friday, eight on Saturday and another eight on Sunday. Pretty much every weekend, there has been a few of them. Obviously, as the hotel starts to pick up, we’ve had to limit the number of rooms that we do, but originally, we set up three rooms for these particular dinners, and we are selling more than the three at a time. The feedback has been tremendous. It is a great way for people that might not feel comfortable coming into a restaurant to feel safe.”

What has worked particularly well is the upgrade options on the initial package, including adding an overnight stay. “I think we ended up only selling three without overnight stays,” he said. “We are only doing $99 for the overnight stay. It is encouraging people to stay over and, ultimately, they end up getting room service the next morning, which generates more dollars or if they are comfortable to come down for brunch, that option is there too. There is also minibar dollars and the like. It is not just the dinner with a view, it is the additional ancillary revenue as well.”

Both Ayres and Travers said that the programs have allowed them to bring some of their employees back to work. “Right now, it is not legal for us to do a catering or banquet event, but because of some of these, I was able to bring on some of the banquet servers to help with them because doing eight a night was just a bit too much for the restaurant team to handle on the weekend,” said Travers. “They were able to come back and make some money.”

Ayres said that it is important to be able to pivot when times call for it. “You quickly realize, whether it is a pandemic or any situation that stands before you, for only so long can you see say we need to get things back together and keep things afloat before you really have to start reaching for something outside the box to differentiate you,” he said. “Trying to be ahead of these trends and changes and curves was what we were always looking for. Knowing that we couldn’t stretch ourselves too far. What were they looking for in spring, what were they looking for in summer? For Valentine’s Day? For a holiday? Having those discussions well in advance that would give our brand traction in these times but in the future. People are going to remember that experience they had in some of the worst times and create loyal customers forever.”

Web Exclusive: Establishing a Hotel Brand During COVID-19 by Abby Elyssa Even prior to the COVID-19 outbreak, opening a new hotel or establishing a new brand were…
Updated: Caesars, Others Provide Comfort During Pandemic by Hotel Business NATIONAL REPORT—At times of crisis, the hotel industry makes every effort to take care of its…
Web Exclusive: A peek inside Hilton Atlanta Marietta Hotel by Abby Elyssa Premier has completed a full-scale, $15-million renovation of the property
Web Exclusive: Reiimagine emerges as a hotel sales disruptor by Adam Perkowsky At a time when talent is hard to find in the hotel industry and teams are…