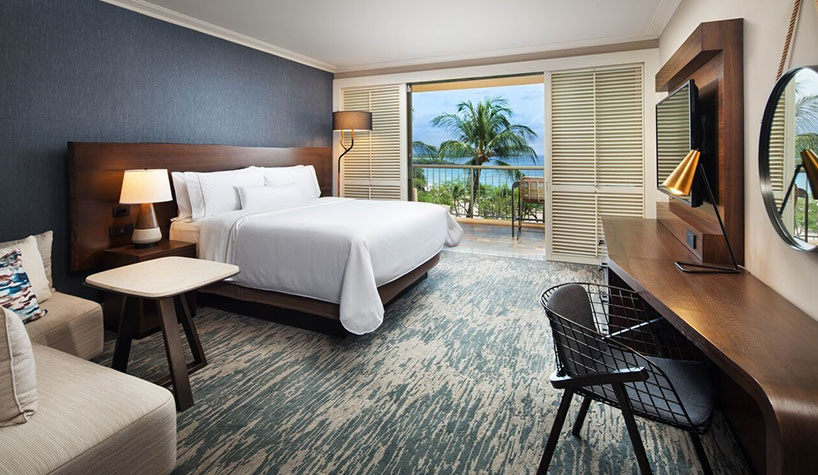 NATIONAL REPORT—From the Big Island in Hawaii to Ohio, new hotels are opening across the U.S. These properties highlight the best of what’s around, including tropical aesthetics, city sights and locale-infused menus.

Westin Hotels & Resorts Debuts on the Big Island in Hawaii

Westin Hotels & Resorts, part of Marriott International and in partnership with Mauna Kea Resorts LLC, has opened The Westin Hapuna Beach Resort following a multimillion-dollar renovation to its guestrooms and suites; four new culinary concepts; and public spaces with an all-new adults-only pool and enhancements to the existing family pool area.

The Westin Hapuna Beach Resort will have 17 new suites that complement 232 guestrooms. Attractions include an exclusive adults-only infinity edge pool that has private cabanas and a new CrossFit studio.

The Presidio Trust has opened the Lodge at the Presidio. This newly renovated hotel is the closest lodging in San Francisco to the Golden Gate Bridge, with views of the bridge, the Presidio’s 300-acre forest, the San Francisco Bay and the city skyline.

The three-story, 42-room space occupies one of the five identical Montgomery St. Barracks built by the U.S. Army to accommodate six artillery companies, a Calvary troop and two infantry companies. It is one of 470 structures in the Presidio on the National Registry of Historic Places.

For entertainment, guests have access to the new Presidio Visitor Center, 25 miles of hiking and 25 miles of biking trails, beaches like Crissy Field, and more.

Canopy by Hilton, alongside PM Hotel Group and The Buccini/Pollin Group (BPG), has opened the brand’s first West Coast property, Canopy by Hilton Portland Pearl District in downtown Portland, OR.

All 153 guestrooms, including the 46 premium rooms, have floor-to-ceiling windows. The property also has the only hotel rooftop fitness center in the city. For dining, there’s Canopy Central—a café and reception area—which has a regionally influenced menu. At night, guests can have local drinks direct from the beverage makers of Portland’s Distillery Row as part of the property’s complimentary evening tasting. The hotel also has 1,093 sq. ft. of meeting space with four private meeting rooms.

The new property offers studio, one-bedroom and two-bedroom suites with fully equipped kitchens, as well as separate living/working and sleeping areas. Guests can create their own complimentary hot breakfast every morning in the lobby area. There’s also the 24-hour In a Pinch market and On Us coffee service. In addition, there’s on-site copying, faxing, printing and 480 sq. ft. of meeting space to accommodate functions of up to 16 people.

The new four-story, 123-room, all-suite property is located near the San Antonio International Airport and is near several military bases, hospitals, corporate offices and universities. Each suite has an in-room kitchen equipped with a full-size refrigerator and free WiFi.

With the recent opening of the Renaissance Columbus Westerville-Polaris Hotel, Concord Hospitality has opened its 100th property in its growing portfolio of brands. The hotel development, ownership and management company has spent the last 33 years partnering with owners and investors on more than $2.5 billion developing properties across North America. Concord Hospitality plans to open seven new properties, with 13 additional openings already planned throughout 2019 and 2020.

Hilton signs six luxury hotels across APAC The brand's pipeline of luxury hotels in the region increases to 20
Across the Pond: Hotel Openings in Europe INTERNATIONAL REPORT—Hotels are opening all over Europe, including Kimpton’s first property in Spain and Hard Rock’s…
citizenM plans six 2022 openings citizenM has revealed its expansion plans for the year ahead, taking its total number of hotels…
A Trio of Openings Across the U.S. NATIONAL REPORT—Hotels that recently opened across the U.S. include an Autograph Collection property in San Juan…