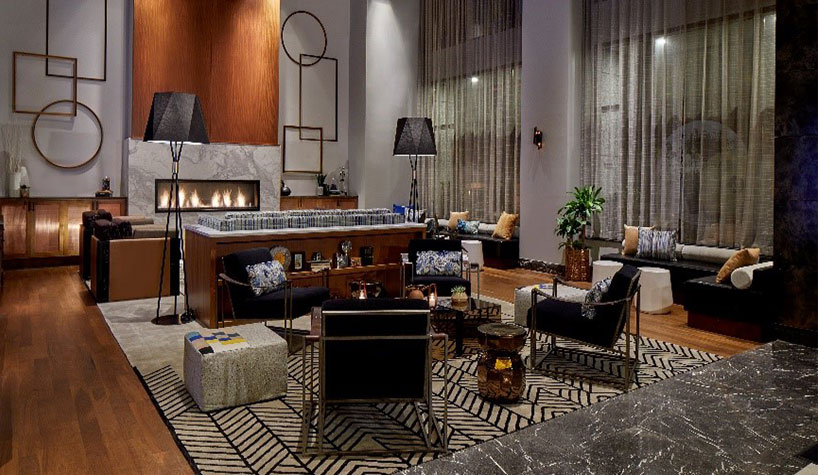 Inspired by the eclectic energy and urban sensibility of Midtown Atlanta, Studio 11 Design created and executed a one-of-a-kind concept fusing art with technology.

The new lobby creates a transition between the check-in area and the hotel’s restaurant. The open space is now inclusive of Community Smith restaurant, creating an all-encompassing space for visitors to gather, socialize and dine.

Each of the 335 Richardson hotel rooms, including 42 suites, have been completely transformed following the renovation by design firm Studio HBA. Digital art designed with cowboy hats, boots and jeans line the guestroom closets; there’s also a custom silver cow head near the bathroom and a paisley leather foot stool.

In addition, there’s an artistic interpretation of “birds on a wire” from floor-to-floor in the hotel’s 12-story atrium lobby. There’s also a 20-ft. digital art wall behind shimmering silver beads that welcomes attendees on arrival for meetings and events. The hotel’s 30,000 sq. ft. of function space has also been redesigned.

The hotel now has 209 fully renovated guestrooms and suites; a refreshed lobby that includes a designed timeline of the hotel’s 100-year history along with a memorial to the Women’s Auxiliary Corps, which was hosted at the Hotel Savery during World War II; and a new restaurant concept.

Coda Lounge, also off the lobby, offers crafted cocktails inspired by pre- and post-Prohibition era libations. The renovation has also brought artwork within the 12,000 sq. ft. of meetings and event spaces featuring classic looks from the 1940-1950s.

Columbia Sussex, one of the largest Marriott franchisees in the country, continues its renovation program to at least nine of its Marriott-owned and operated properties. Known for its proximity to Phoenix Sky Harbor International Airport, the downtown Phoenix scene and Major League Baseball’s spring training venues, Phoenix Airport Marriott has completed Phase I of its multimillion-dollar renovation, which includes all guestrooms, suites and pool area.

Phase II will include public and meeting spaces, the restaurant, bar/lounge and Marriott’s signature Greatroom lobby and is expected to be complete in spring 2019. The hotel’s design is inspired by the Greek myth of the phoenix bird that regenerates itself, raw elements, rich desert tones and energetic geometric patterns.

The Westin Tampa Waterside has just completed a multimillion-dollar renovation in Tampa, FL.

The guestrooms were fully refurbished in a neutral palette with blue accents to reflect the Tampa area. In addition, The Club Lounge, lobby and meeting space, Blue Harbour Eatery + Bar and the pool area were all renovated.

Princeton Marriott at Forrestal has transformed its Princeton, NJ meeting space, refreshed lobby, guestrooms and restaurant. The new look, following its recent $12-million renovation, has outdoor space for social events and 32 meeting rooms designed to accommodate events of all sizes.

Delta Hotels by Marriott Calgary Downtown in Canada has a new design. Upon completion, the renovation includes redesigned guestrooms, new function space, redesigned lobby and entry and the opening of Shoe & Canoe Public House and the Elite Pantry at the renovated downtown Calgary hotel.

The redesigned hotel lobby and entry feature a next-generation front reception with mobile check-in and a lobby ambassador to greet you on arrival. The hotel’s gym is also open with new equipment.