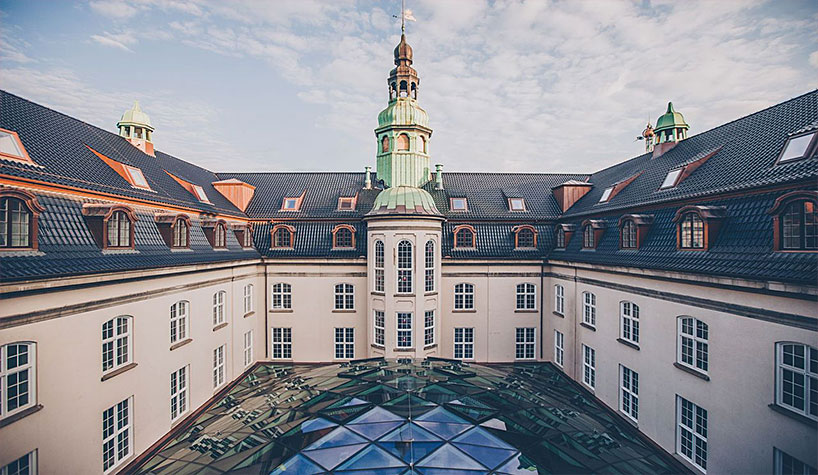 INTERNATIONAL REPORT—Hotel openings abroad include a new hotel in Denmark repurposed from the century-old Danish Post and Telegraph office and others, while Mandarin Oriental has set 2023 for the debut of a mixed-use project in Vienna.

Villa Copenhagen
The 390-room Villa Copenhagen has opened in the heart of Denmark’s capital city. It is housed in the century-old Danish Post and Telegraph office, adjacent to Tivoli Gardens, and features new interiors designed by London-based Universal Design Studio that match the 1912 Neo-Baroque architecture.

The property features a number of outdoor and interior spaces, including The Courtyard, designed by Shamballa Jewels; the Old Boardroom, which serves as a private event space for intimate gatherings and dinners; and 24,757-sq.-ft. of flexible meeting and event spaces for smaller gatherings or large events of up to 1,200 attendees.

The hotel also offers a year-round rooftop pool and bar; a 24-hour fitness center with sauna; and a hidden garden growing organic herbs, spices, vegetables and honey. The five F&B outlets include Public and Rug Bakery.

Hacienda Xcanatun by Angsana
Banyan Tree Group has launched its third property in Mexico, Hacienda Xcanatun, which will be operated by its upscale brand, Angsana. The hotel presents a contemporary interpretation of the legendary Yucatan (henequenera) Haciendas (large agricultural estates of the 18th century amid henequen agave plant), according to the company.

Technology offerings in the guestrooms will include flat-screen TVs, complimentary WiFi and internet connections, as well as media hubs, USB chargers and desks with multiple plug sockets. Bathrooms will offer Japanese-style “washlet” water closets and separate shower booths. Guests staying in Club or Suite rooms will be granted complimentary access to the Club Lounge.

The property will include two restaurants and a lounge; four main multifunctional banquet rooms; a business center; a 24-hour kiosk offering drinks and snacks; an outdoor swimming pool; a fitness center gym; and a Japanese-style bath.

F&B offerings include The Secret Cave, illuminated with flickering torches and candles; the Purnama Honeymoon Bale, built on the rocks at the edge of the resort’s oceanfront; and the Writers Bar and adjoining Library.

The conversion of the property is already underway, and the restoration will preserve many of the building’s original design elements. On completion, the hotel will offer 151 guestrooms and suites surrounding a courtyard in the center of the property, incorporating a restaurant, bar and outdoor garden. The property will also house a Spa at Mandarin Oriental featuring a series of treatment rooms, a swimming pool and a fitness center. A range of adaptable banquet and meeting spaces will also be available.

The project is owned by Brisen Group, headquartered in Geneva and operating in the European real estate investment and wealth management sectors. London-based designers Goddard Littlefair have been appointed to create the hotel and residences’ interiors.

Hilton properties open in and around Indianapolis Recent openings in Indianapolis and its surrounding area include a dual-branded Hampton Inn and Homewood Suites…
Virgin Hotels to Debut in Key Cities Across the Globe INTERNATIONAL REPORT—Virgin Hotels is staying active with new hotel openings on the horizon: Virgin Hotels to…
Marriott plans summer openings across the globe Marriott Bonvoy, Marriott International's portfolio of 30 hotel brands, will expand its footprint in leisure locales…
Across the Globe, Three Properties Rebrand INTERNATIONAL REPORT—Rebranding and renovation plans are underway here and abroad. Here's a look: Hāna-Maui Resort Joins…