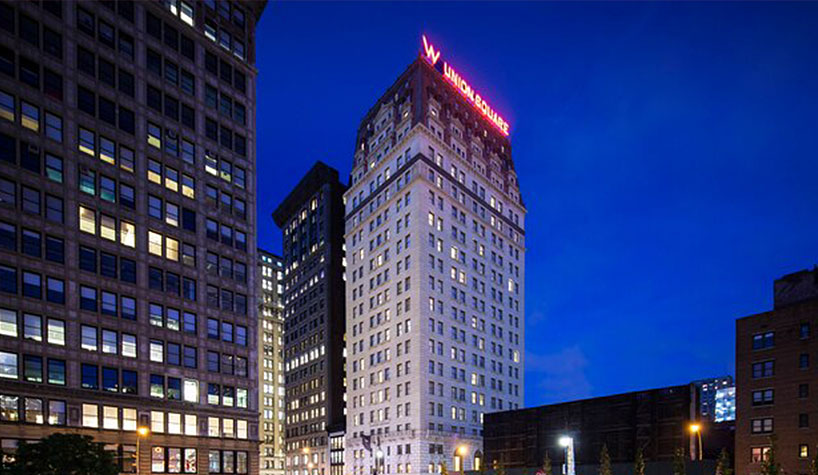 BETHESDA, MD—Marriott International Inc. has purchased the 270-room W New York – Union Square for $206 million, with plans for a significant renovation. The company will transform the existing hotel into a “cutting-edge W Hotels showcase,” advancing the company’s strategy to redefine and reinvigorate the brand in North America.

“This marks such an exciting new chapter for W Hotels—a chance to evolve and redefine the brand right where it all began: New York City,” Anthony Ingham, global brand leader, W Hotels Worldwide, told Hotel Business. “The overhaul of W New York – Union Square is part of a larger transformation program we put in place in North America, which also includes new openings in locations from Aspen to Toronto, as well as extensive renovations at many of our hotels in the region such as the recent, top-to-toe makeover of W Washington D.C.”

Located at 201 Park Avenue South, the 20-story hotel includes historic Beaux Arts architecture, panoramic views of Union Square’s namesake pedestrian plaza and park, and a W Union Square rooftop sign that stands out on the Downtown skyline. The property first opened its doors in 1911 as the headquarters of the Guardian Life Insurance Company of America, and in 2000 opened as W New York – Union Square.

The renovation seeks to unlock the property’s untapped potential with plans for a signature, socially charged spa and an expanded restaurant. Honoring the brand’s electric New York City roots and innovative drive, the renovated hotel will be the incubator and catalyst for a new vision for W in North America—one focused on immersive, next-level contextual design; authentic, experiential programming; and a fresh take on the brand’s signature “Whatever/Whenever” service philosophy, according to the company.

The purchase and renovation of W New York – Union Square is part of a comprehensive plan by Marriott International to reinvigorate the W portfolio in North America. The plan also includes the recent opening of W Aspen—the brand’s first alpine destination in the U.S., and the anticipated 2020 debuts of W hotels in Philadelphia and Toronto. Additionally, W owners in North America have already committed to $200 million worth of renovations on properties across the U.S. and Canada, such as the recent top-to-bottom renovation of W Washington D.C.

As of June, Marriott International had 56 open W hotels worldwide in 26 countries and territories, with another 32 signed W hotel projects in the pipeline with the brand debuting in eight additional countries. In keeping with Marriott International’s asset-light strategy, the company over time expects to market W New York – Union Square for sale subject to a long-term management agreement.