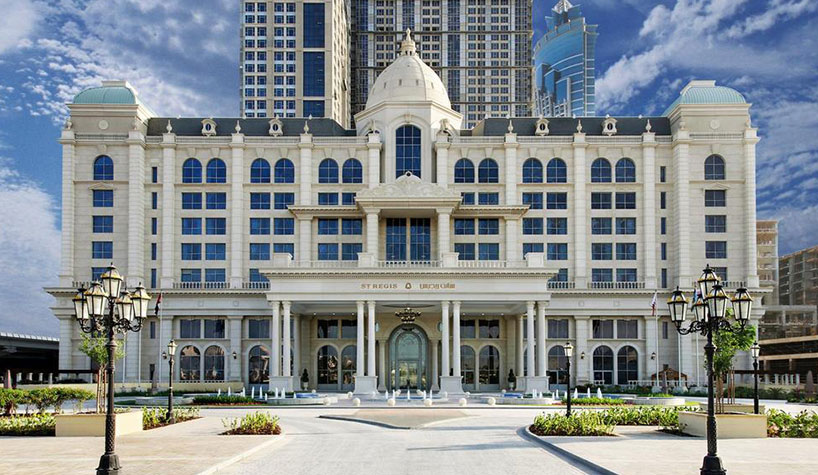 The St. Regis Dubai has been rebranded as Habtoor Palace Hotel.

DUBAI—Hilton is relaunching its luxury collection brand, LXR Hotels & Resorts, with the rebranding of the St. Regis Dubai to Habtoor Palace Hotel, located in Dubai’s Al Habtoor City. This is one of three rebranding projects slated for the area.

The 234-guestroom Habtoor Palace will operate as an independent property as it joins LXR Hotels & Resorts. LXR previously launched in 2005, when the Blackstone Group acquired Wyndham International. When Blackstone acquired Hilton in 2007, many LXR properties were then reflagged under Hilton brands.

Commenting on the new luxury brand, a Hilton spokesperson said, “At Hilton, we are continuously evaluating the market, examining trends and listening to traveler and owner feedback so that we can better address new guests and new markets. As we continue to diversify our luxury portfolio—building on the legacy of the Waldorf Astoria and Conrad brands—we have developed LXR, a luxury collection brand comprising independent, iconic properties that maintain their own identity but are united by the benefits of the Hilton enterprise and the award-winning Honors program. We look forward to sharing more details about this exciting new brand in the coming weeks and months.”

Al Habtoor added, “We are pleased to extend our partnership with Hilton to three additional hotel properties at Al Habtoor City, our flagship hospitality, leisure and residential development located in the heart of Dubai. This is a record transition into a new portfolio of brands, a testament to the strong relationship and trust between Al Habtoor Group and Hilton. The announcement today increases our partnership with Hilton from five hotels to eight hotels around the world.”

Carter noted that the addition of the three properties strengthens a strategic partnership with Al Habtoor Group, which spans across several markets internationally. “Our portfolio will now see more than 5,000 rooms open by the end of the year in Dubai, a destination that ranks alongside global powerhouses such as London, Paris and New York in terms of annual visitor numbers,” he said.

Al Habtoor City is a residential and leisure complex situated on Dubai’s Sheikh Zayed Rd. The properties overlook Dubai Creek and the upcoming Business Bay district, close to the city’s downtown area, which includes landmarks such as the Burj Khalifa and Dubai Mall.

Hilton's LXR Hotels & Resorts Brand Makes U.S. Debut SANTA MONICA, CA—LXR Hotels & Resorts, Hilton’s collection of independent, luxury properties, has made its U.S.…
Hilton expands all-inclusive and luxury portfolio in Mexico Hilton has signed three managed resorts in Mexico, furthering the company’s all-inclusive and luxury expansion plans:…
Wyndham Opens Two Properties in Dubai PARSIPPANY, NJ—Wyndham Hotels & Resorts has continued its expansion across the UAE with the opening of…
IHG to launch new luxury and lifestyle brand In its Q2 earnings report, IHG Hotels and Resorts revealed that it will be launching a…