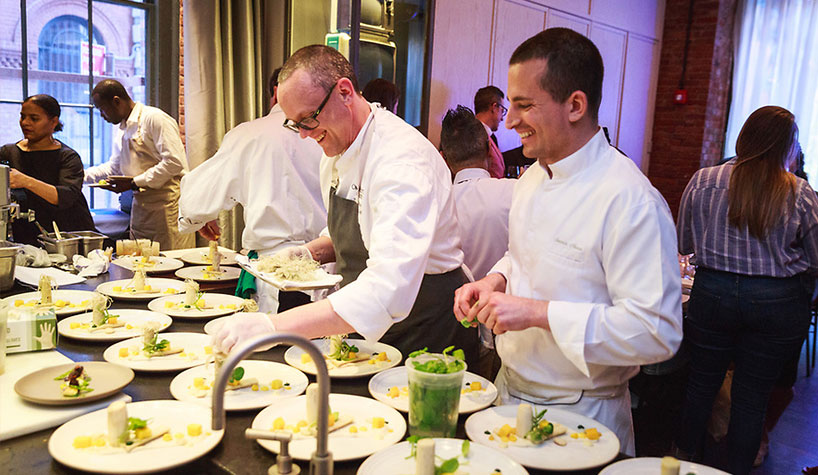 The “four seasons” meal featured courses that paid tribute to different times of the year. Summer-inspired fruits, such as mango, were part of a hearts of palm appetizer, while there was also a twist on holiday traditions with a lobster Waldorf salad.

Regional Executive Chef at Omni Amelia Island Plantation Resort Daven Wardynski, along with four other executive chefs—Daniel Schick from the Omni King Edward Hotel; Severin Nunn from the Onmi Homestead Resort; and David Harker from Omni Nashville Hotel—each assembled courses of their own for a meal at the Chefs Club in New York City.

“It’s all about understanding your food, locale and emphasizing that. That’s our job as chefs,” said Wardynski. He believes that a plate of food tells a story, whether it be a tribute to location or a chef’s past experiences—all play into creating not only a meal but an experience.

The meal’s five courses each came with a wine or cocktail pairing and showcased classic ingredients in a new way. The most reimagined just may have been the Morel Smash, a garden-to-glass rum cocktail that blended strawberry, rhubarb and morel-infused honey syrup. Or, it could have very possibly been the honey dessert, which featured pollen, wax and nectar, a tribute to Chef Wardynski’s 28 colonies of bees on Amelia Island. Wardynski harvests this honey three times a year and tends to 2.5-million bees to create this signature dessert.

While these choices may seem bold, Wardynski and the other chefs make a concerted effort to keep their menus approachable for diners and a true presentation of each of their backgrounds. “Understanding we can’t drift too far off the edge and intimidate the guest, we want to make sure that we can deliver food that is recognizable, food that is delicious in flavor, not overstated, simple. But, as you eat through it, there’s an experience to the plate that is one that you find to be memorable,” explained Wardynski.

The dinner was appropriately named “An Omni Originals Showcase,” delivering food that was not only unique to the Omni brand but also creative in its presentation. The event promised an interactive experience for guests, which meant having a kitchen in the dining room, with guests having the chance to watch each of the chefs prepare his own course and also work together to assemble the flow of the meal. The meal also utilized vibrant cooking tools and techniques, such as a blow torch and the use of smoke and ash.

“There’s no reason for a chef to hide behind the doors in a kitchen that’s closed off and no one sees what you’re doing. It puts a partition between you and the guest experience,” said Wardynski. “We want them to see everything we’re doing; we want the interaction, we want to see their faces when they taste, they eat. There’s so much that goes into a plate. Then, being able to bring the plate out and as it’s sitting in front of you, tell you the story behind why we chose that dish, it almost makes the food taste better.”

Each of the chefs at the event embraced this style of cooking, especially because each expressed such a passion for local ingredients and the Omni brand. Wardynski said that Omni prides itself on simple, not overly complicated cooking that gives diners a true taste for the locale through approachable yet reinvented classics. “The diner’s experience is something that we want to make sure is at the forefront of everything we put out there,” he said. “As you wrap these all together—the five pieces, our four seasons—this is the way we approach our guests and deliver to them something unique and original,” said Wardynski.