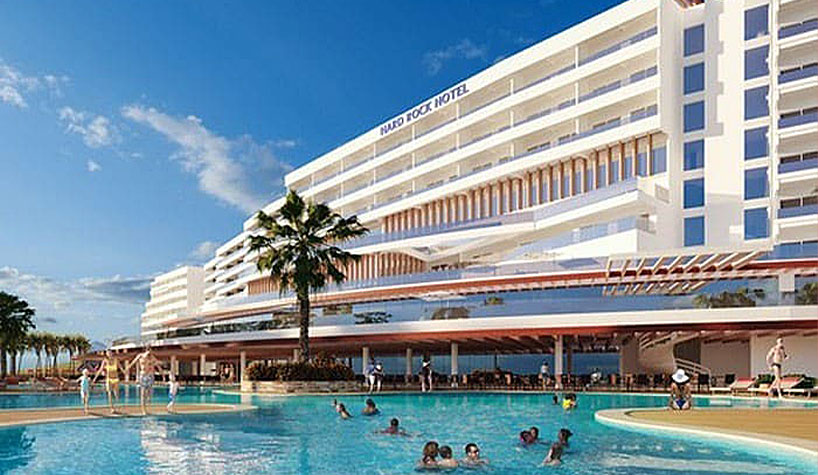 Hard Rock will be opening eight new properties in Brazil including in Fortaleza.

Hard Rock Hotels has revealed plans for the development of eight hotels with approximately 3,000 rooms in several cities throughout Brazil, including São Paulo, Fortaleza, Ilha de Sol, Campos do Jordão, Foz do Iguaçu, Jericoacoara, Natal and Recife. The properties, developed and owned by Brazil-based real estate developer VCI S.A., will be managed by Hard Rock Hotels.

The upcoming Brazilian Hard Rock hotels will showcase the country’s vibrant, energetic and artistic culture through locally inspired design and live music experiences, according to the company. While design elements for each property will differ, architectures and International interior design companies are working to procure unique pieces to showcase throughout the properties. In conjunction with the interior design features, Hard Rock is actively sourcing authentic memorabilia from celebrated Brazilian artists to be featured in its collection of more than 86,000 pieces and at each property.

The properties are slated for completion over the next eight years and three projects are already under construction, with Sao Paulo, Fortaleza and the first phase of Ilha de Sol anticipated for 2022; Recife, Natal and the second phase of Ilha de Sol for 2024; Foz de Iguaçu for 2025; Campos do Jordão for 2027; and Jericoacoara for 2028. The development of eight new Hard Rock hotels will create anywhere from hundreds to thousands of jobs in the area and is expected to stimulate local economies by boosting tourism. In addition to the advancements created by the physical construction, local executives are working to improve infrastructure, health, transport access and social programs ahead of the completion dates.

“Brazil is poised to step up as a headlining performer on the world stage of travel destinations, with 10 Hard Rock hotels slated for development in collaboration with three different partners, VCI S.A. being the largest of the three,” said Todd Hricko, SVP, hotel development, Hard Rock Hotels. “This announcement exemplifies great strides for Hard Rock’s continued global growth, and throughout Brazil specifically, for years to come.”

Samuel Sicchierolli, president/chairman, VCI S.A., added, “We are incredibly excited to be working in collaboration with Hard Rock to see the brand come to life in a new country. The next eight years will signify a new era for Hard Rock, and we are honored to be able to assist in the development process.”