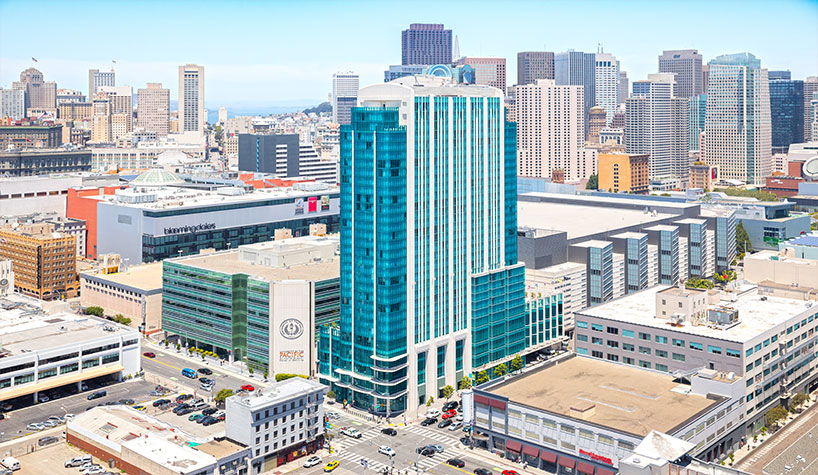 The InterContinental San Francisco is getting $110 million of first-mortgage financing.

NATIONAL REPORT—Some full-service hotels with large inventory pools are in the news today, whether they’re getting the funds they need or in transaction mode. Here are a few to know.

California-based Sonnenblick-Eichner Co. has arranged $110 million of first-mortgage financing to refinance the InterContinental San Francisco. The 32-story, 550-room hotel in the South of Market district is located adjacent the city’s Moscone Convention Center.

According to Sonnenblick-Eichner, the interest rate for this 10-year, non-recourse, fixed-rate loan is in the low 4% range, and was priced at less than 200 basis points over the swap rate. The loan was funded by an undisclosed Wall Street investment bank.

“The new loan replaced an existing floating-rate LIBOR-based loan. With the approximate 80 basis point increase in LIBOR over the last 12-month period in 2017, locking in a long-term fixed-rate loan provided the best alternative for the sponsor,” added company Principal Elliot Eichner.

Another deal in California saw the sale of the 376-key Wyndham Anaheim Garden Grove by Pacific Hospitality Group (PHG). Hodges Ward Elliott (HWE) arranged the sale to Irvine, CA-based Khanna Enterprises, which is led by President Ravi Khanna. The purchase price was not disclosed.

The hotel includes more than 30,000 sq. ft. of meeting space, three food and beverage outlets, a fitness center and an outdoor pool.

PHG developed the Wyndham Anaheim as the Crowne Plaza Anaheim Resort in 1999. It was rebranded under the Wyndham flag in May 2014.

According to HWE, Pacific Hospitality Group invested more than $5 million in capital improvements to the hotel, including a transformation of the lobby and food and beverage outlets. Following the sale, Khanna Enterprises plans to renovate, reposition and reflag the hotel as a Delta by Marriott.

The recently opened Ace Hotel New Orleans has received a $51-million refinancing via Holliday Fenoglio Fowler LP (HFF), which worked on behalf of the borrower, a partnership between Domain Companies and Avenue Capital Group, to place the floating-rate loan with TPG RE Finance Trust.

Loan proceeds will be used to refinance the construction financing, according to HFF.

The 234-key hotel, located at 600 Carondelet St., was originally constructed in 1928. The building was renovated and redeveloped into the Ace, which opened in 2016, and included the construction of a four-story building on an adjacent lot.

The Mercedes-Benz Superdome, Smoothie King Arena, Ernest N. Morial Convention Center and French Quarter are all within walking distance of the hotel.

The completed property, slated to open this year, will consist of a 37-story building with 349 guestrooms, a ground-floor restaurant, lobby bar, lounge and a rooftop bar.

The Lightstone Group acquired the site in July 2014 and broke ground in April 2016. Bank of the Ozarks and a subsidiary of Marriott International provided $101.8 million in construction financing, including the mezzanine debt.

Lightstone recently completed the adaptive reuse of an office building at 485 Seventh Ave. into the 612-key Moxy Times Square.

Square Mile VP Eric Cohen said, “Our acquisition of the mezzanine loan on this project was a logical renewal of our relationship with Lightstone after we successfully exited our investment in the development of the Moxy New York Times Square.”