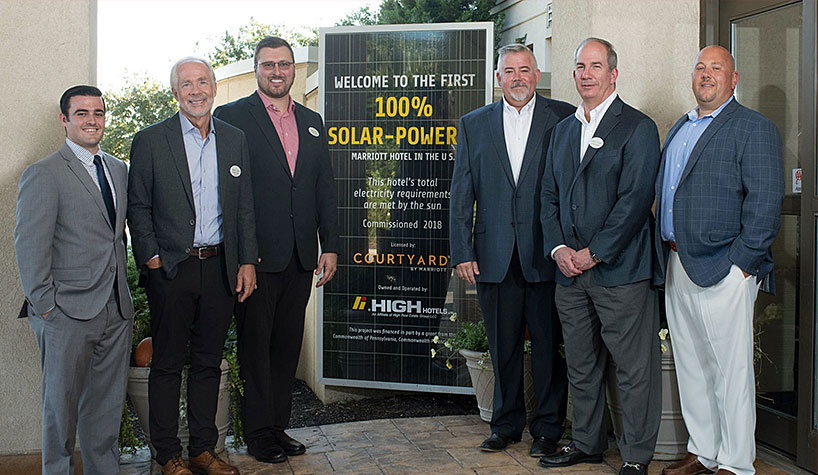 Representatives of High Hotels and local dignitaries were on hand as the hotel went 100% solar-powered.

The lights ceremoniously dimmed at the moment the electric power switched over to 100% renewable energy. About 75 staff, community members, elected officials and onlookers watched as a new real-time meter located in the hotel lobby displayed the solar power produced by the project.

The celebration marked the completion of a 135,200-sq.-ft. solar installation constructed by High Hotels, the Lancaster, PA-based, family owned hotel developer, owner, and operator in partnership with Marriott International Inc. Due to its size—more than twice as big as a football field—the 2,700-panel array was placed on the roof of a warehouse about half a mile from the hotel. Both the hotel and the warehouse are located in Greenfield Corporate Center, a 600-acre master-planned mixed-use business campus. Greenfield Corporate Center is owned by High Properties.

“Our guests now have the satisfaction of knowing that they are staying in a hotel that’s fully powered by the sun,” said Russ Urban, president of High Hotels. “As a company, we’re strong believers in environmental stewardship, and taking this step into renewables aligns with the interests of a growing segment of the traveling public.”

Urban said that while guests can see the meter display and take pride in choosing this first-solar-powered Marriott, they will notice no difference in the function of electrically-powered amenities at the hotel.

At 133 rooms, the Courtyard by Marriott-Lancaster is the first Marriott-branded hotel in the U.S. with 100% of its electricity needs generated from solar power. It is also believed to be the first solar array in the country installed for the sole purpose of generating 100% of the electricity needs of a hotel.

The solar array produces 1,239,000 kWh of power for the hotel, which consumes 1,177,000 kWh. Excess power is sold to the utility. High Hotels received a grant of $504,900 from the Commonwealth Financing Authority (CFA) through the Solar Energy Program to complete the project.