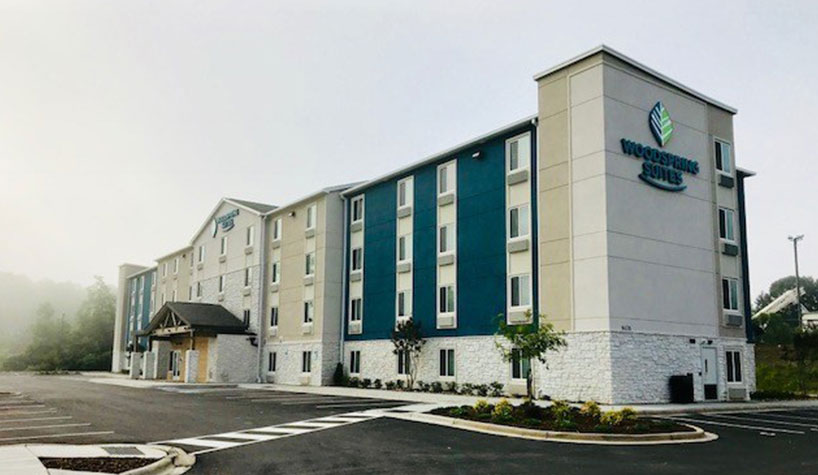 NATIONAL REPORT—Two WoodSpring Suites properties have opened in Charlotte, NC; a New York hotel honors its community; and Mississippi gets its first Hotel Indigo. Here’s more on the properties paying tribute to local businesses and culture:

The property is close to the University of Maryland, Capital One Field at Maryland Stadium, Xfinity Center, FedExField, Fort Meade, NASA Goddard Visitor’s Center, the Mall at Prince Georges and three international airports. The Cambria Hotel College Park also has an on-site restaurant, fitness center and meeting spaces. In addition, an Orangetheory Fitness Studio is set to open in the fall of this year.

The 112-room property is close to Downtown Charleston’s business and historic districts and the beaches of Sullivan’s Island. The hotel has multifunction meeting spaces along with a fitness center.

Lark Hotels has opened its first New York hotel, The Downtowner, in Saratoga Springs, NY. Formerly known as the Saratoga Downtowner, The Downtowner’s 42 newly renovated guestrooms pay homage to the hotel’s past as a retro motor lodge and the surrounding area’s community of writers, performers and visual artists.

Located on the “50-yard line” of Broadway St. at the corner of Division St., The Downtowner is close to the race track and Saratoga Springs’ bars, restaurants and shops.

The Hotel Indigo-Hattiesburg hotel is close to the University of Southern Mississippi and The Avenues. The five-story boutique hotel has 100 rooms and a 24/7 business center with wireless internet and printing available. Other amenities include a restaurant and bar and an on-site fitness center.

Prestige Hospitality Group has opened the 122-room Courtyard by Marriott Wayne Fairfield hotel in Wayne, NJ. The three-story hotel has an indoor swimming pool, an outdoor fire pit, fitness center and guest laundry. The hotel offers more than 1,587 sq. ft. of meeting space to accommodate functions of up to 100 people.