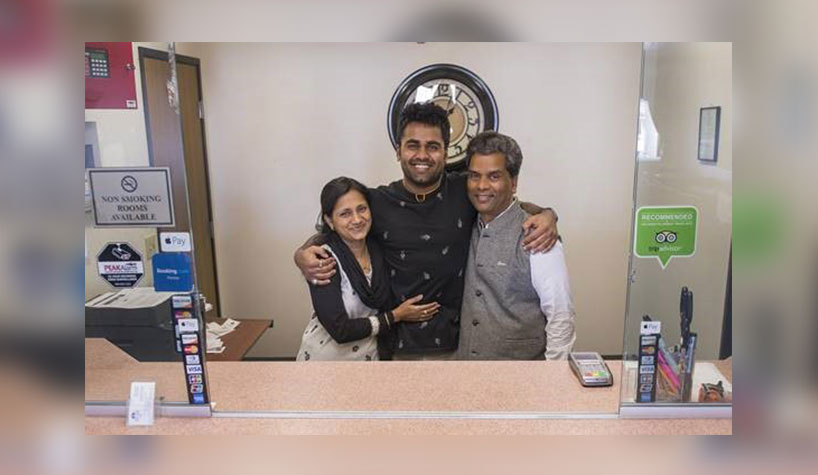 GREEN RIVER, UT—The first episode of an Apple TV series, Little America, depicts the story of Kunal Sah, whose Indian immigrant parents’ growing hotel franchise business fell upon his care at the age of 12 after their abrupt deportation.

“My parents, Kanhai and Sarita Sah, came to the United States in 1990. My father was pursuing his bachelor’s degree in aviation engineering in Oakland, CA, and worked many odd jobs 24/7 around the clock to save penny after penny,” said Kunal Sah, now 26 years old.

Kanhai Sah’s goal wasn’t to be a hotelier, but he was inspired by some of his colleagues who were in the same business.

“In 1997, my parents bought their first motel in Green River. It was called the Budget Inn. After working nonstop for four years, they then bought land in the same town and constructed a brand-new Ramada,” said Kunal Sah. “Soon after, they opened two more hotels: one in northern Utah and one in Charlotte, NC.”

After numerous appeals with immigration authorities, Kanhai and Sarita Sah had to leave their adopted home of Utah and their businesses. At the tender age of 12, Kunal Sah had to grow up quickly as he was now tasked with overseeing the multiple hotel properties. During this time, he maintained a 4.0 grade point average and went on to compete in the National Spelling Bee in Washington, DC. The family remained separated for 11 years.

When asked to describe what it was like to experience separation from his family as a child, Kunal Sah shared this: “Anything I could possibly say would end up being an understatement. Only I know how I felt through those days; nothing I could say would bring my experiences to justice. It was nightmarish, harrowing, horrific—you name it.”

Sah was living in fear of what would come next.

“It all happened so fast. It’s like I had no other option but to just hold on for my life,” he said. “My parents had established four uber-successful hotels and now they were being forced to leave them behind—to me. I just felt broken and shattered, initially. These feelings lasted for years. The key was to take it one day at a time. Each and every single hour was a new challenge. I took them all individually and somehow made it through over a decade.”

When Sah turned 21, he was successful in finally getting his family back.

“My family is doing quite incredible today,” said Kunal Sah. “I sponsored them myself after I turned 21. It took about two years after that point. I welcomed them back in early February 2017. We also added a very important member to our family, Shayona Sah, who is my wife. We were married on January 31, 2019, in India.”

Before the family’s reunion, there were numerous attempts over several years.

“We were writing to immigration, tried to speak to congressmen and congresswomen across the country, myriad lawyers, but ended up with nothing,” said Sah. “Their deportation order was totally unfair, especially considering they did everything the right way and more than half of the town in which we lived was illegally present in the country.”

Through phone calls from India, the parents stayed connected and provided much-needed support to their young son. “I had no other support system,” he said. “The phone calls were the biggest support I had, nothing else.”

Through this ordeal, Sah had to let go of his childhood dreams.

Maintaining a hotel business was rigorous, but Sah relied on his parents’ faith in him.

“I didn’t even know what tax or mortgage meant at that age. I scrambled for guidance each day from various people. Little by little, I learned the hotel business, stumbling each step of the way. It’s not like I didn’t make mistakes; I made more than I can count. It was so much pressure, and not having anyone constructive around was a real killer,” he said. “But, I was given a practical exam at a very young age, which has taught me in a way that can’t be discounted. The lessons I’ve learned and experiences I have gone through, I wouldn’t trade them for anything in the world.”

Before Apple TV created the series, it all started with a collection of essays for Epic magazine, titled “Little America.”

“It was truly an amazing experience that has still left me speechless,” he said. “Apple came along and I was just overwhelmed with the entire series of events that took place to then produce my story as part of Apple TV’s lineup. Their products are in more than a billion hands across this world; it’s just insane to imagine that my story is in the reach of so many individuals.”

He added, “My story is a hard one to put into words, though I think it will be put into words one day. The episode gave a very small visual insight into what we as a family went through. It’s hard to put years of context into 30 minutes, but I think they’ve done an outstanding job.”

Growing up in the hospitality industry, Sah offers a unique perspective.

“I love that each day is different. There isn’t a single monotonous day where I catch myself doing the same thing over and over,” he said. “Each day is a brand-new challenge and I crave that; I crave seeking new heights within my profession, to network and to grow in every aspect.”

Having come through this challenging experience, Sah believes he’s mastered the art of perseverance.

“Personally, and professionally, I think I learned how to persevere and continue on through the waves of life,” he said. “As a family though, it made us much stronger than we’ve ever been before. We made it through hell and back, and we can’t be happier with where we are today.”

Based on years of experience and his ability to overcome these challenges, Sah has this advice to hoteliers: “If success is what you want, then go grab it. I’m sure everyone knows that to be successful in the hotel industry, it’s a tough nut to crack. But in terms of building a better life for yourself, it’s all about being happy while you do what you love. You can never have too many days of happiness.”

“Value each day. It’s human nature to get used to things quickly and to get caught up in the day to day of life. But the tragedy we went through as a family, it helped us to learn how to live in some ways,” he said. “Every day, every minute and every second is beautiful. Live happily, laugh and grow through the good times and tough times alike. I’ve always lived by one statement: ‘God never gives you what you can’t handle.’ And, I stand by that.”