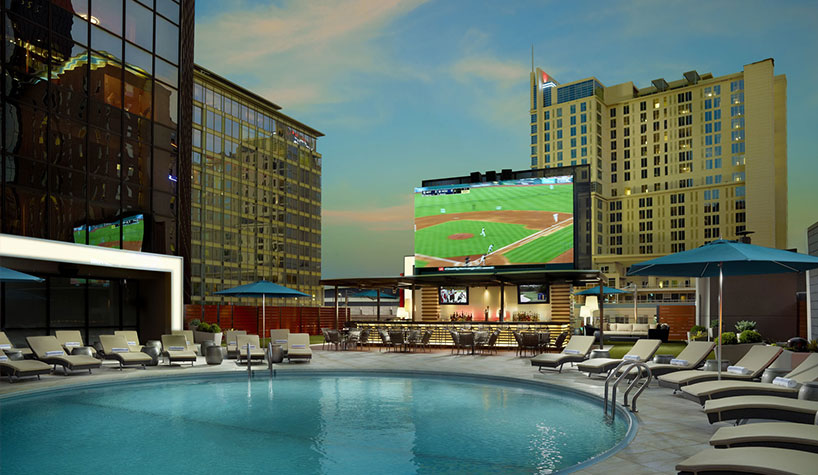 NATIONAL REPORT—In the South, several hotels are sprucing up their offerings by adding modern amenities and more space. Here’s a look at four:

Omni Charlotte Hotel has completed a $26-million renovation that includes a new exterior and lobby, a refreshed restaurant and bar, 374 renovated guestrooms and suites, and a redesigned rooftop pool deck and bar space.

Rooms include a coffee bar built into the countertop, sofas near the windows and the bathrooms have new vanities and showers.

In addition, there was a complete redesign of the rooftop pool deck, Coin Bar. The area has nearly 3,000 sq. ft.  of additional space that includes a new bar and grill with poolside cocktails and small bites. The space also has LED television screens that can be seen from Epicentre, the surrounding area of businesses and entertainment venues.

The Gaylord Texan Resort in Grapevine, TX has opened the doors of its latest addition, the new Vineyard Tower. The $115-million project was completed by property owner Ryman Hospitality Properties Inc.

Le Meridien Hotels & Resorts celebrates the 95th anniversary of The Stoneleigh Court Hotel in Dallas with its renovation by Studio 11 Design. The result is a reimagined restaurant with French-inspired cuisine, refreshed gathering spaces, and a restoration of the 11th and 12th floors known as The Penthouse.

The Lancaster Hotel will undergo a multimillion-dollar renovation, taking place under new owners, the Shinn family of Dallas. The redesigned hotel will place a new focus on the visual arts, complementing the property’s location in Houston’s theater and performing arts district, while acknowledging its legacy as a Texas Historic Landmark. The hotel will reopen in August.

Public spaces and guestrooms will incorporate Shinn’s collection of more than 200 pieces by Texas artists such as Mark Flood, Terrell James, Trenton Doyle Hancock, Aaron Parazette, and Margo Sawyer. In addition, pieces by Donald Judd, Robert Rauschenberg, and James Surls, among others, will be placed throughout the property.

There will also be added amenities such as a cardio fitness room, Frettè bedding and towels, Bulgari bath amenities, and complimentary shoe shine and garment pressing. There are also plans for a redesigned and renamed restaurant, Cultivated F+B. The restaurant is expected to open in conjunction with the hotel with a reimagined menu.