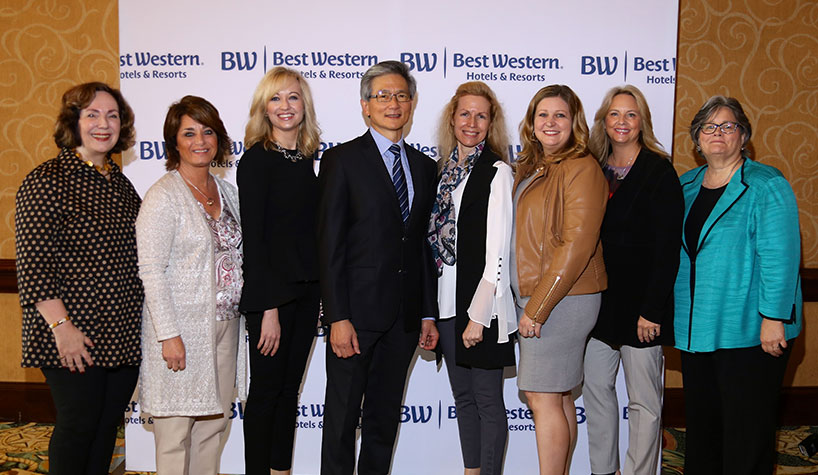 GRAPEVINE, TX—This year’s Best Western North American Convention and Conference, held here, featured the first-ever “Today’s Women in Leadership Forum,” which fostered an atmosphere where women and men could gather to discuss challenges and successes, learn and network. In keeping with the spirit of inclusivity, in addition to a number of successful female leaders, the day also featured a discussion with Best Western Hotels & Resorts President/CEO David Kong, who shared leadership advice he’s learned along the way—as well as his thoughts on gender in the workplace.

Attitude is everything. “I came to this country as a teenager in the 1970s,” Kong said. “I’ve met my fair share of difficulties and disappointments, but I learned early on that attitude was everything. If you don’t have the right attitude, you won’t be successful. Who will want to work with you?”

When faced with difficulties, the worst thing you can do is have a chip on your shoulder, Kong said. “You need to do the reverse—let it go to prove that person wrong,” he added, recalling his early days as an F&B director for a large Hyatt hotel.

“I was doing a good job, but this regional VP was being unreasonably difficult on me,” he said. “He promoted two other people and I felt hurt and frustrated. I asked myself, ‘What can I do about the situation?’ I rallied the team and said, ‘Let’s prove him wrong. Let’s have the best results this hotel has ever seen.’”

The team was successful, achieving the best guest satisfaction results, best employee engagement scores, one of the highest profits and the best revenue growth the food and beverage department had ever seen in that hotel. “Despite all that, I still didn’t get my opportunity,” Kong said, noting that he and his wife decided to set a timeframe for moving on. “You hit the glass ceiling, you can’t break through, what do you do? We put our house on the market, sold it on the first day.”

However, the president of the company was visiting the hotel. “I thought it was a good opportunity, so I told the limo driver I’d pick him up. I picked him up and had a chance to talk to him one on one, and explained all the things we’d been able to achieve, and lo and behold, one month later, I was promoted,” Kong said. “The lesson here is when you’re angry and frustrated, find a way to channel that energy and use it constructively to prove a point. From that point on, if I get mad at something, I set a goal to prove that person wrong.”

Working hard often isn’t enough. Kong said that he used to question why others sometimes moved up faster than him even though they didn’t work as hard. “What dawned on me is working hard is just the price of entry,” he said. “You’ve got to ask what else differentiates you.”

He recalled a time he worked as a general manager, but the hotel had hit a plateau. “This was back in the early 1980s; I came up with a satisfaction guarantee—this was way before Hampton or anyone talked about it,” he said. “I used that not as a marketing ploy, but to change the culture of the hotel. I asked the staff if we were good enough to offer it; they all got motivated with that.

“They wanted to be the best, and I used that to change the culture of the organization, resulting in unbelievable results,” Kong said. “The corporation saw that, and they moved me to corporate and asked me to head up the business process reengineering efforts to help redesign how to work at the hotel. I wouldn’t have gotten that job if I didn’t start thinking out of the box. We all know hard work is important but alone, it’s not enough. There are a lot of people who work hard.”

Visualize your best outcome. On a personal note, Kong shared that his son had been born with a hole in his heart and, shortly after being born, went into the ICU for a month. “There was a point when the doctor told me one night it’s not looking good. I went to the chapel and started praying. I told myself if I could just envision this child at 10-years-old, he’d be OK… and he pulled though,” Kong said. “And today, he is 33. That’s the power of visualization.”

He added that this applies to the workplace as well. “If I want a certain position, I’ve got to visualize myself in that position—how I look, act, conduct myself, because then other people see me in that position. That’s how you get to become that person,” he said.

Passion and drive inspire. “If you’re not passionate, why should anyone else care?” Kong asked, noting that, like all hotel companies, Best Western recognizes exceptional hotel staff at its convention. “We got a nomination for GM of the year, and what’s unusual is it was signed by everybody at the hotel—26 people,” he said. “I’d never seen a nomination signed by that many people.

“This general manager has this model—you see it, you own it; she empowers employees to do whatever it takes,” he said. “If they get a complaint, they have the power to resolve it. She sets an example herself. She straightens furniture in disarray, she sees a mess and mops it, and if a complaint comes in at the front desk, she’s right there. The team was inspired by that. They felt this person walks the talk. Don’t underestimate the passion that’s in all of you. Your passion is extremely powerful. Use that to inspire other people.”

The glass ceiling is real, and it needs to be eliminated. “Growing up, I always thought my daughter would go places,” Kong said, noting that as a child she played both the piano and the violin. “She would wake up at 5:30 a.m. every morning and practice piano and violin and get ready for school from a young age,” he said.

At 14, she decided she wanted to run cross-country. “I said, ‘Are you kidding me, that’s a three-mile run.’” At the time, Kong ran below a seven-minute mile, so one day, he got his two children together for a run. “Not even a mile in, my son said, ‘I give up, it’s too hard.’ My daughter is beat red, hair drenched—she just kept going. This girl is going to go places. That determination is incredible,” he said.

Once she finished undergrad, Kong’s daughter worked and got her Masters degree simultaneously. “I thought it would take four or five years, going to night school, taking a class or two. She finished in two years,” he said.

“I always thought she was going to go places. But every time she gave birth, it was a set back to her career. She took four months off, so she had to reestablish herself. It has not been easy for her,” he said, adding that she’s respected professionally. “She won a trip for being the best salesperson in the company—only four people did out of tens of thousands that company has. She’s really good at what she does, and yet, she’s hit that ceiling too. She’s not able to move up… You look at it and that’s so unfair and unjust. People in general feel women are going to get pregnant, so they don’t give them the same chances, and that needs to be corrected.”

For more on the “Today’s Women in Leadership Forum”—as well as an exclusive on Best Western’s new Aiden and Sadie brands—check out the Oct. 21 issue of Hotel Business.