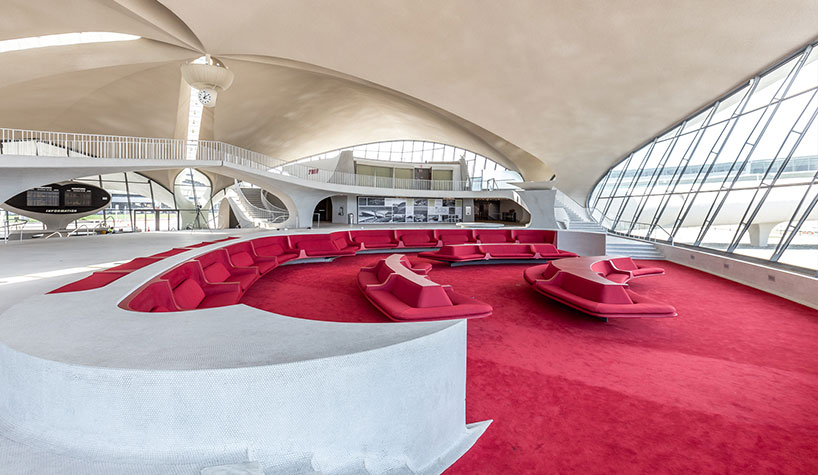 Gerber Group will operate The Sunken Lounge, the premier bar at the 512-­room TWA Hotel, opening on May 15. The Sunken Lounge is undergoing a restoration by MCR/Morse Development to its original 1962 Eero Saarinen design. Floor-­to-­ceiling windows provide views of the hotel’s 1958 Lockheed Constellation “Connie” airplane (parked on the tarmac just outside) while overhead a split flap departures board manufactured by Solari di Udine displays custom messages.

The Cosmopolitan Las Vegas will debut a new modern, experiential barbershop and speakeasy with The Barbershop Cuts & Cocktails. Working alongside international designer, Vincent Celano, the both full service men’s grooming salon and Prohibition-style speakeasy will debut this spring.

The Barbershop’s authentically handcrafted bar designed by John Moses Brunswick originated from Kentucky in the 1800s and appeared in the hit motion picture film, The Greatest Showman. The standout piece is a vintage Brunswick bar which features a curated barrel-aged whiskey selection, as well as craft beer and other spirits.

Esperanza, Auberge Resorts Collection, on the bluffs of Punta Ballena in Mexico, introduces Culinary at the Cove, ­a new seaside program centered around food, exploration and relaxation. Led by Executive Chef Guillermo Gomez, the new experience features diving for Baja’s “seafood candy,” chocolata clams, off the East Coast of the Baja California Peninsula; foraging for sea urchin, snails and blue stone crabs along Esperanza’s private cove; and unwinding in one of the resort’s two new two­-story beach palapas with a private butler while being only a few steps away from the Sea of Cortez.

The Miami Beach Edition has a new offering: Iguanita Beer. This classic lager is sourced from Hallertaur hops which give it a rich golden hue, crisp flavor and distinct fruity and floral notes. Iguanita, brewed by the Biscayne Bay Brewing Company, can only be found at The Miami Beach Edition.

It’s brunch time in downtown Springfield. Chefs Michael Mina and Adam Sobel have debuted a new weekend menu for Cal Mare at MGM Springfield, with brunch staples complemented by Italian classics and cocktails. Available for reservations on Saturdays and Sundays from 10 a.m.-2:30 p.m.

The Buccaneer in the U.S. Virgin Islands introduces Beauregard’s on the Beach, a casual beachfront restaurant to the 340-acre property. The space has a bar and lounge areas.

Benchmark has named Joseph Cavet director of food and beverage for The Kartrite Resort & Indoor Waterpark. The Benchmark Resorts & Hotels property, located in Monticello, NY, within the Catskill Mountains, will open next month on 1,600 wooded acres, the site of the Resorts World Catskills entertainment complex. Joseph Cavet brings more than 15 years of leadership experience to his new position with The Kartrite. He was most recently multi­unit general manager for OTG Management.

Four Seasons Houston Hotel has appointed Khalid Mirza as its new director of food and beverage. Khalid started his career in the hospitality industry at this very same property as a busboy in the early 1980s and remained with Four Seasons for assignments around the globe such as Beverly Wilshire, Amman, Las Vegas, Chicago and Boston.

Cooking Up Success with Virtual Cooking Events HARRISBURG, PA—Thanks in part to a second grade teacher, the Hilton Harrisburg has found a way…