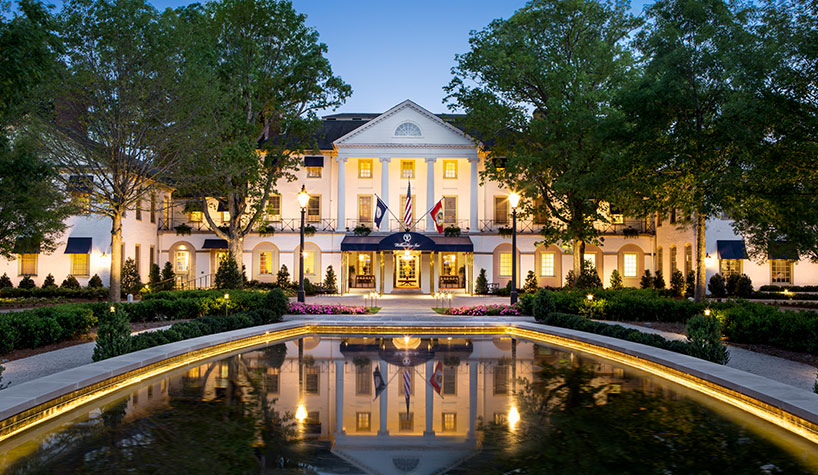 The Williamsburg Inn is a member of Historic Hotels of America.

WASHINGTON, DC—Historic hotels have a story all their own to tell. Travel journalist and producer Peter Greenberg is unlocking these properties’ pasts and sharing them with TV viewers for the Hotels with a Past series, which appears on PBS, YouTube and other media platforms.

“All good stories start with a conversation,” said Greenberg. “I was speaking with Larry Horwitz [executive director, Historic Hotels of America and Historic Hotels Worldwide] and he started telling some of those stories about the hotels in his association—and, quite simply, I wanted to learn and know more.”

For Greenberg, a hotel is a continuing, living story. “A historic hotel is a library. It’s not just about the building or the location,” he said. “A historic hotel tells the stories of our own history, our culture, how our society has evolved and changed, and puts things in proper perspective.”

Historic hotels often have an impressive past. To present this history for television, Greenberg believes it must be relatable.

“The stories of the historic hotels resonate with me—and hopefully with others—because they can often become so personal… It’s how people lived,” he said. “It sounds trite, but these hotels are where history happened. They transport you to another time and place, and you can immerse yourself in those moments of history. And it’s not just the public rooms where history happened, but the kitchens, the laundries, and the rest of the back of the house where the real stories are told.”

Among the Historic Hotels of America properties visited for the production of the show, Greenberg shared one property that really surprised him.

“French Lick, Indiana, was a real surprise to me. Most travelers don’t know about it, and couldn’t even find it on a map,” he said. “But the two hotels there tell a remarkable story of how Americans lived at the turn of the last century—how they traveled to get there, what they were seeking, what motivated them to come, and then all the secrets the hotel still keeps.”

“It’s not some static museum. It’s a living, breathing symbol and engine of hospitality and a reminder of the way things used to be, and, in some very refreshing ways, the way things still are,” he explained.

While newer hotels are focused on a tech-forward, data-driven and sometimes trendy way of delivering on the brand promise, Greenberg embraces legacy and pace. He remains attracted to old-school elevators, grand staircases and natural acoustics.

“I don’t need to have scented lobbies or someone else’s playlist blaring in public spaces. I don’t need to ramp up the energy,” he said. “I appreciate a slower pace that, in itself, allows for a more romantic, thoughtful approach to hospitality. And that slower pace allows you to stop and look around and immerse yourself in the history that surrounds you at a historic hotel. And out of all of that, if I’m doing my work well, comes great and enduring storytelling that I can share with my viewers.”