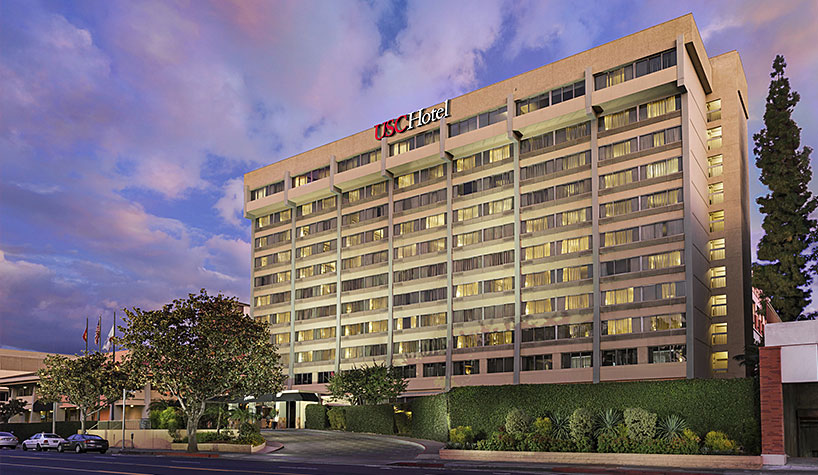 Auxiliary Services at the University of Southern California owns and operates the USC Hotel.

LOS ANGELES—After 18 years of owning—and eight years of managing—a hotel on its campus, the University of Southern California (USC) Auxiliary Services recently made the decision to de-flag from a national brand and become USC Hotel—based on the cachet that the school’s name brings.

The 240-room hotel, formerly the Radisson Hotel Los Angeles Midtown at USC, first opened as a Hilton in 1974, but operated under the Radisson flag for the last 20 years.

“They were good partners, and they really wanted us to remain with them, and we considered it,” said Kris Klinger, assistant VP of USC Hospitality and USC Hotel, Auxiliary Services. “We looked at the value proposition from a customer/guest perspective—and also a business perspective—and felt that this is the best decision for us to make. It gave us flexibility as well. Brands [have] brand standards; it is great to have those because it takes things to a level that you may not be at, but it does create some barriers and boundaries, and doesn’t give you the flexibility you may have if you are independent.”

Auxiliary Services felt confident that the USC brand would be strong enough to attract business. The plan to rebrand took its first steps with the renovation of the property, which began in 2012 and lasted until 2015. “It really shifted the trajectory of the hotel,” said Dirk De Jong, executive director of USC Hospitality and USC Hotel. “We then had the opportunity to bring a lot of the USC-related business back home. Prior to the renovation, the hotel wasn’t really up to standards.” 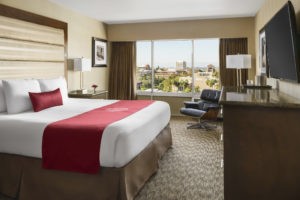 Several of the floors housed dorm rooms until 2011. “It wasn’t even functioning as a full hotel,” said De Jong. “Basically, we had two business models under one roof and it was hard to manage. The product was outdated. Prior to Auxiliary Services managing it, it was managed by an outside management company that the university contracted with. When we took it over and started the renovation process, it really gave us the opportunity to realign it a lot more with the university. We added a lot of decor that made reference to the university, including pictures from the digital archives of the university, displaying college life, in various public places and in the rooms, and then some elements that you could see the Trojan spirit coming through.”

The renovation helped the USC community realize that the university owned the property. “When we came out of renovation in 2015, we had the opportunity to do a grand reopening party and invited everyone in the university to come out and see our new product,“ he said. “That really helped us to repatriate a lot of the business that we had lost to downtown and the hotels that had opened up down there. From 2015 onward, every year, we were outperforming in all areas: occupancy, ADR, as well as guest-satisfaction scores.” 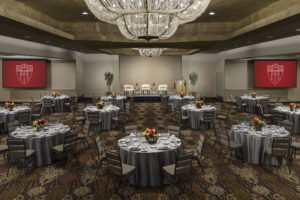 Services confident that the property would benefit from the rebranding. “We weren’t separating because we had a bad relationship with Radisson; we actually had a very good relationship, certainly over the last few years,” said De Jong. “The [Radisson] team that came in was really impressed with our property. They used it for some corporate trainings, and as one of the regional hotels that they would want other properties to emulate.”

The hotel also won several awards from Radisson, but “we still had to make the right decision for our university,” said De Jong. “Looking at our guest profile and how people booked through the various channels, we probably got a lot more bookings that are handled by our reservations team and our sales team for group business and individual business from our campus partners than any other hotel, even university hotels. Knowing how our booking and our guest mix was made up, we were able to bring up our group business to comprise three-quarters being USC groups—with some kind of USC affiliation, such as visiting teams of other universities playing our sports teams, meetings and conferences, or groups associated with the various schools on campus. We were able to push that up from maybe 40% to 75%. Our individual business, the majority was USC related. We knew that we were in a strong position to go in and did not necessarily need the brand anymore.”