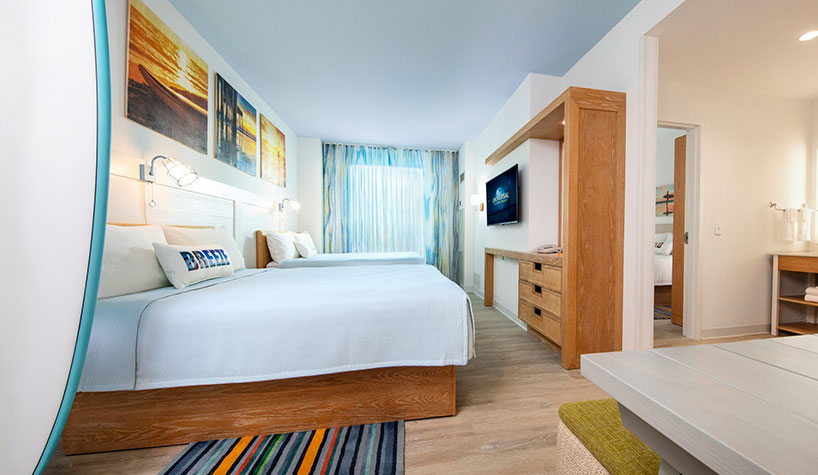 Dockside Inn and Suites is the second hotel in Universal Orlando’s Value category and will add 2,050 guestrooms to the destination by the end of 2020, featuring both standard rooms and spacious two-bedroom suites that sleep up to six. Plus, hotel guests receive exclusive theme park benefits, including Early Park Admission, complimentary and convenient transportation to and from the theme parks, and more.

With the addition of Dockside Inn and Suites and the 750-room Surfside Inn and Suites, the two Universal’s Endless Summer Resort hotels will add 2,800 rooms to the destination—bringing the total room count at Universal Orlando Resort to 9,000 rooms by the end of 2020.

Located near the city’s famed The Design Center of the Americas, the 12-story hotel, designed by David Ashen of dash design, features 245 guestrooms and suites. Throughout the exterior and interior of the hotel, guests will find references to the sky and sea with design details such as a grand oculus in the lobby that frames the sky to pay homage the glamorous era of air travel, allowing guests to stargaze and view planes passing over. The guestrooms are minimal and modern in design with touches of blue and grey to reflect the destination, features custom-made headboards with mappings of the city inlaid into the wood veneer, and local photography captured by Elizabeth Gill Lui that celebrates the diverse architecture and environment of Fort Lauderdale.

With a bright, modern design that reflects Daytona’s vibrant coastal atmosphere both inside and out, the resort-style property features 112 guestrooms; an oceanfront pool, sun deck, and tiki hut; and a meeting space designed for business groups and weddings.

The hotel’s 98 standard guestrooms are equipped with premium bedding, a flat-screen TV, and a microwave, mini-fridge, and coffeemaker, while its 14 family-friendly efficiency suites also include full kitchens. In addition, guests staying in one of the hotel’s 76 ocean-facing rooms will enjoy a private balcony.