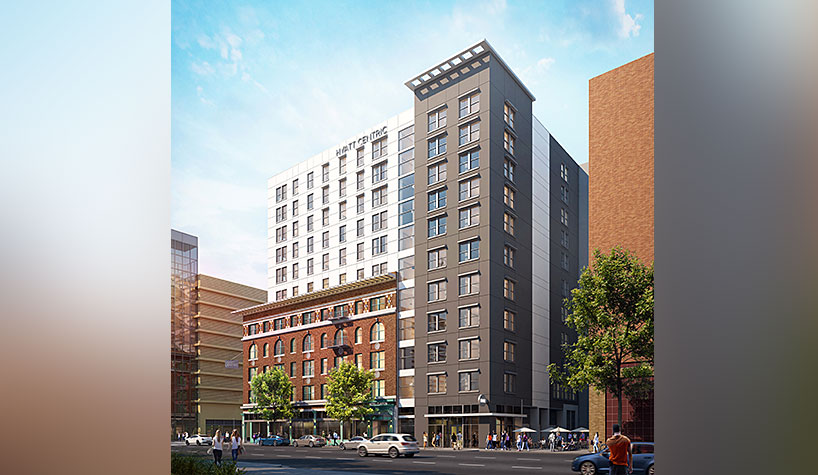 Northern California has seen the opening of two new hotels with stylish design at their cores.

The hotel provides a launchpad for travelers to discover all that Sacramento has to offer including historic landmarks, an eclectic dining scene, trendy shopping, vibrant nightlife and Old Sacramento Waterfront activities, according to the owners. Located adjacent to the Golden 1 Center and Downtown Commons (DOCO), the hotel has 172 guestrooms and suites, 2,000 sq. ft. of meeting space and a fitness center.

The original hotel’s history dates back to 1911, when it first opened as the five-story Hotel Clayton. In 1939, it became Hotel Marshall, named after James W. Marshall, who discovered gold in the American River that sparked the California Gold Rush. For 30 years, from the 1920s to 1950s, Hotel Marshall was the jewel in the crown of Sacramento’s vivacious music and jazz scene. The stage in the hotel lobby’s famed Clayton Club saw the era’s biggest acts including Louis Armstrong, Billie Holiday and Cab Calloway.

Now, standing at 11 stories high, the new hotel has preserved two of the original facades and celebrates the property’s past including Marshall amps stacked behind the front desk, to hand-painted murals of famous musicians in guestroom closets and music studio inspired light fixtures throughout the hotel.

The Clayton Club rooftop lounge located on the sixth floor pays homage to the prohibition era and the music scene the original Clayton Club entertained. Native Sacramentan and member of the farm-to-fork movement, chef Ravin Patel helms the kitchen and showcases his mastery of small plates that celebrate the melting pot of cuisines in the region alongside unique craft cocktails. On the ground level, The 7th Street Standard Restaurant, an American restaurant and bar also led by Patel, features a bar and dining room with high-style cues from the golden age of the hotel and is open for dinner and brunch seven days a week. A private dining room is also available for intimate parties and special occasions.

The reflagged independent hotel, formerly known as the Garden Court Hotel, has 62 guestrooms, indoor and outdoor meeting spaces and seasonal food and beverage offerings in new spaces. The renovation was overseen by hotel design firm NICOLEHOLLIS and structured with the discerning business and leisure traveler in mind.

Inspired by Spanish open-air living, Hollis emphasized a warm, tranquil respite and drew on botanical-themed nuances including an abundance of lush greenery and a color palette highlighting rich black forest greens, stone blues, touches of terracotta orange and a blend of neutral tones. The property delivers a balance between a stately Spanish home and a contemporary destination, connecting each space to el PRADO’s central courtyard and focal point.

Upon opening, the hotel debuted a two-floor glass solarium outfitted with seating adjacent to the Breakfast Cafe; a second-floor bar serving Spanish-inspired bites and signature cocktails; The Library, featuring a boardroom table, separate lounge area with plush couches and full technology capabilities for business conferencing; and a back courtyard area fit with a large fireplace and outdoor lounge furniture adjacent to lobby-level meeting rooms for breakout sessions.