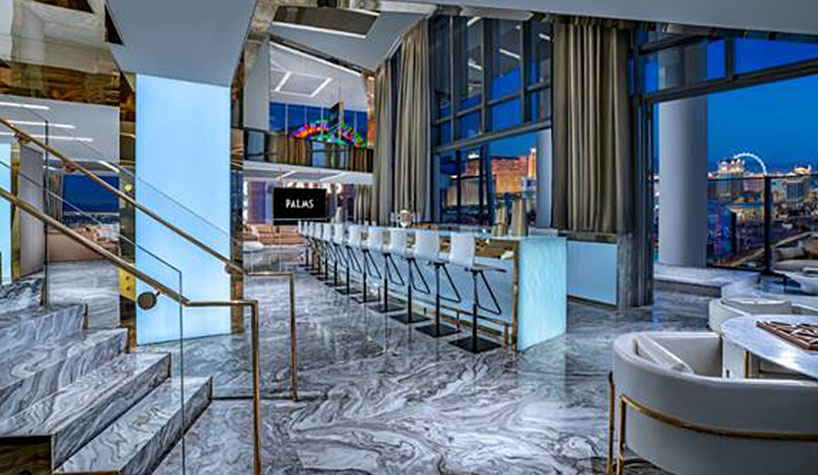 NATIONAL REPORT—Hotels around the country are upgrading their offerings, including a $40,000-a-night suite in Las Vegas.

The one and two-story Sky Villas all have cantilever pools, which jut out over the facade of the hotel and offer unrivaled views of the Las Vegas strip.

The six Sky Villas have been completely redesigned by Bentel & Bentel Architects to offer some of the most luxurious (and expensive) hotel accommodations in the world, according to the hotel.

The two-year revamp included a renovation of its entire casino floor as well as its hotel guestrooms and suites, and the addition of a new resort-style pool area, a nine-screen movieplex and new restaurants such as Boathouse Asian Eatery, bBd’s (Beers Burgers Desserts)and the re-conceptualized Feast Buffet, and more.

The 21-story hotel tower has 575 newly renovated hotel guestrooms and suites influenced by a modern style with a color palette infused with natural earth tones. Amenities within each guest room include a mounted 55-inch flat screen TV, headboard reading lights and bathrooms with quartz countertops and walk-in stone showers.

Led by Chicago-based design and architecture firm Zimmerman Weintraub Associates (ZWA), the project included the complete transformation of the 103 guestrooms, each of the public spaces, as well as all hotel corridors with new furniture, flooring, lighting and new artwork installations.

The hotel in the heart of Downtown Milwaukee is situated in the historic 1924 Straus Building. The redesigned space offers guests and travelers alike a new downtown industrial-chic gathering space steps from the bustling restaurant, theater and art scenes,” according to ZWA. Adorned with contemporary accommodations and elements, firm’s design creates a contemporary narrative with a stylish urban warehouse lobby reminiscent of Milwaukee’s rich past. After experiencing the energy of Milwaukee’s burgeoning downtown scene, guests can relax in chic accommodations and comfortable guestrooms.

New hotels open in Milwaukee, Phoenix and more U.S. cities Recent openings in the U.S. include the 30th avid hotel, an AC Hotel in Phoenix’s Arizona…
Las Vegas Sands Corp. to sell Vegas properties for $6.25B Las Vegas Sands Corp. has entered into definitive agreements to sell its Las Vegas real property…
A Look at Hotel Renovations NATIONAL REPORT—As hotels begin to reopen across the country, guests are being welcomed back to reimagined…
Four East Coast hotels unveil renovations Newly renovated hotels on the East Coast of the U.S. include two properties in Florida, a…