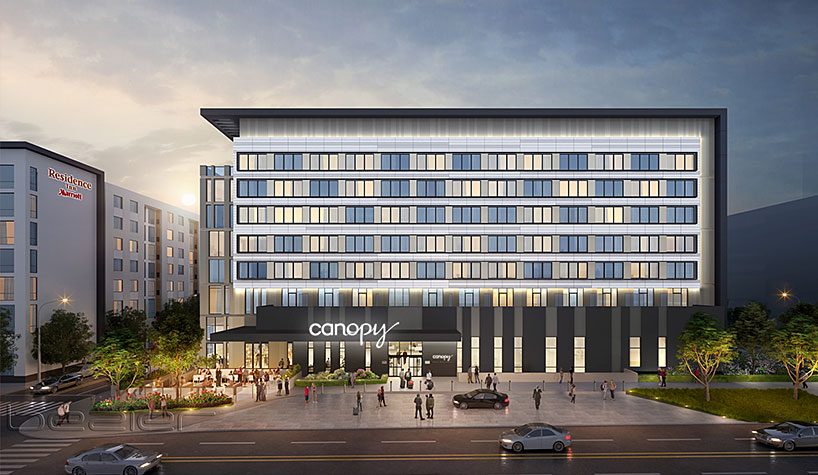 NATIONAL REPORT—Construction is underway on a number of hotel projects across the country, including one of four hotels at a mixed-use development in Texas.

NewcrestImage Breaks Ground For Canopy by Hilton in North Dallas

Canopy by Hilton and hotel ownership group NewcrestImage have broken ground to start construction of the 150-room, seven-floor Canopy by Hilton Dallas Frisco Station, scheduled to open in late 2019.

The property is part of a four-brand, 600-room “hotel campus” in Frisco Station, a first-of-its-kind, 242-acre mixed-use development.

Decor at the Canopy by Hilton Dallas Frisco Station will have locally inspired design, furnishings and artwork. The guestrooms, known as “Just-Right” rooms, will showcase the brand’s distinctive Canopy headboard that reaches to the ceiling and overhangs the bed.

The three hotels to accompany Canopy Dallas Frisco Station will be an AC Hotel, a Residence Inn and a Hyatt Place, each with 150 rooms.

Located within 50 feet of each other, the four hotels will anchor a shopping, dining and entertainment area called “The Hub” that supports Frisco Station’s more than five million sq. ft. of office space; 2,400 urban living units; and park areas.

A development agreement for construction of Full House Resorts Inc.’s expansion project at Bronco Billy’s Casino and Hotel in Las Vegas has been approved by the Cripple Creek City Council.

This approval was the last major approval needed prior to commencement of construction on the expansion project. Slated to include a new luxury hotel tower, spa, parking garage, convention and entertainment center, and high-end restaurant, the Bronco Billy’s expansion will integrate with the existing casino.

With the topping off of Essex on the Park, a new 56-story, 479-unit luxury apartment building in Chicago designed by Hartshorne Plunkard Architecture, the adjacent Essex Inn has closed for a comprehensive redevelopment and repositioning into a luxury lifestyle hotel, including expansion from 254 rooms to 271 rooms. The two adjacent properties are set to open simultaneously in spring 2019.

Amenities of the reimagined hotel will include a chef-driven, three-meal restaurant with in-room dining, as well as SX, a bi-level hotel-operated sky bar and nightlife venue with fully retractable walls, located on the fifth and sixth floor of the apartment tower overlooking the park and lake.