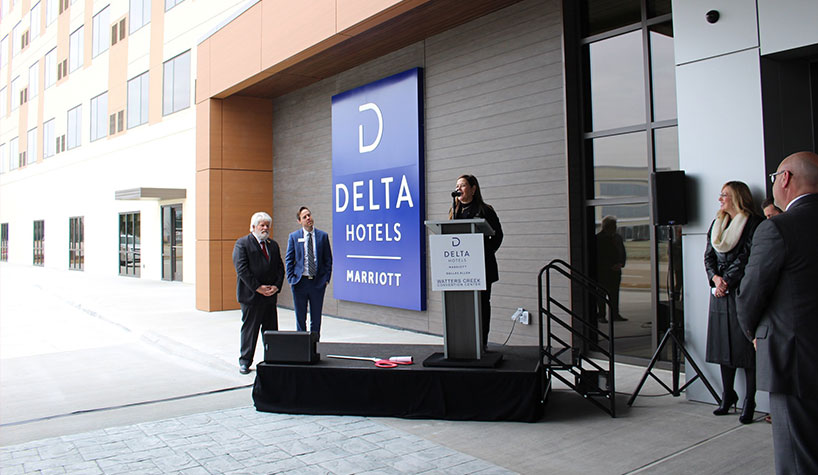 Ribbon cutting of the first Delta Hotels hotel in the Dallas area.

INTERNATIONAL REPORT—Brands are expanding here and abroad, with hotels planting roots in the U.S., Egypt, Ethiopia, France, Canada and Mexico:

This new hotel opening kicks off the year for the Delta Hotels brand, which is focused on continued global growth. Delta Hotels by Marriott Dallas Allen & Watters Creek Convention Center is a public-private partnership between Altera Development and the City of Allen, TX. The property is managed by Benchmark, a global hospitality company.

IHG has signed a management agreement with Arab International Tourism Investment Company to debut the Voco brand in Egypt, with the development of Voco Giza Pyramids. Part of a mixed-use development, which will include a high-end mall, the 182,986-sq.-ft. hotel is scheduled to open in 2022.

The 230-room property will be in the prime locale of Pyramids Gardens in Giza, beside the Grand Egyptian Museum and the main entrance of the Pyramids. Also close to the Sphinx International Airport, the hotel is located near the city center. The new-build hotel will have an outdoor pool, a health club and spa and 9,267 sq. ft. of meeting space. There will also be multiple dining options.

Hyatt Hotels Corporation has opened the Hyatt Regency Addis Ababa, the first Hyatt-branded hotel in Ethiopia and the seventh in Africa. The 188-room property is located on Meskel Sq., near shopping centers, restaurants, bars and tourist attractions, including the National Museum.

With the United Nations Conference Center and African Union Headquarters close by, the largest conference facility in the country, the hotel serves business travelers. Other local attractions include the National Palace and Africa’s biggest open market in the Mercato district.

Radisson to Debut in France

Radisson Hospitality AB has signed the Radisson Resort Sangatte Blériot-Plage in France, marking the brand’s debut in the country. Due to open in 2021, the new-build Radisson Resort Sangatte Blériot-Plage will have 115 rooms, including six suites. Facilities will include dining options, a spa, a fitness center and an indoor swimming pool and two meeting rooms.

Situated on the Opal coast in the Pas-de-Calais area, Sangatte Blériot-Plage is a small seaside destination that’s increasingly popular with travelers—both for its beach facing out onto the Channel and its access to the Eurotunnel, linking it to Western Europe’s major capital cities.

Red Roof is expanding its presence into the Canadian market with its first property in Calgary, Alberta. The company has partnered with FANS International Hospitality Group to grow the brand, beginning with the conversion of a former Travelodge hotel property at Calgary Airport into a Red Roof Plus & Suites. This is the first of multiple properties that Red Roof plans to convert in Canada over the next five years.

The 150 rooms and suites will be renovated to Red Roof quality standards and is slated to open in late spring. The property will not only have all of the Plus upgrades and amenities but will also house an off-lobby restaurant, pool and will offer airport shuttle service.

Grupo Hotelero Santa Fe, S.A.B. of C.V. has signed a franchise agreement with Hyatt for Hyatt Centric Campestre Leon, which will be rebranded from Cleviá Grand Leon. This five-star hotel in León, Guanajuato, Mexico, has 140 rooms and is located in Puerta Bajío, in a mixed-use real estate development including a shopping mall, residential apartments and office space. It is in the north of the city in the “zona dorada,” one of the fastest growing areas in the city. The hotel’s brand change is expected in Q1 2019.

This is the first franchise agreement that Hotel has signed with Hyatt and the first Hyatt Centric hotel to open in the country. The company is evaluating other possible future projects with Hyatt.

Dream Hotel Group has plans to debut the Dream Hotels brand in Valle de Guadalupe in 2021. The latest hotel signing with Baja California-based Cosmopolitan Group represents a milestone for Dream Hotel Group as it marks the first Dream Hotel location and third hotel deal signed in Mexico within the last 12 months.

Designed by Mexican architect Tatiana Bilbao and located on more than 35 acres in the Baja California region of Mexico incorporating a vineyard, the boutique hotel will have 61 guestrooms and villas, a spa and wellness concept and three dining and nightlife venues, including a private tasting room and pool bar.