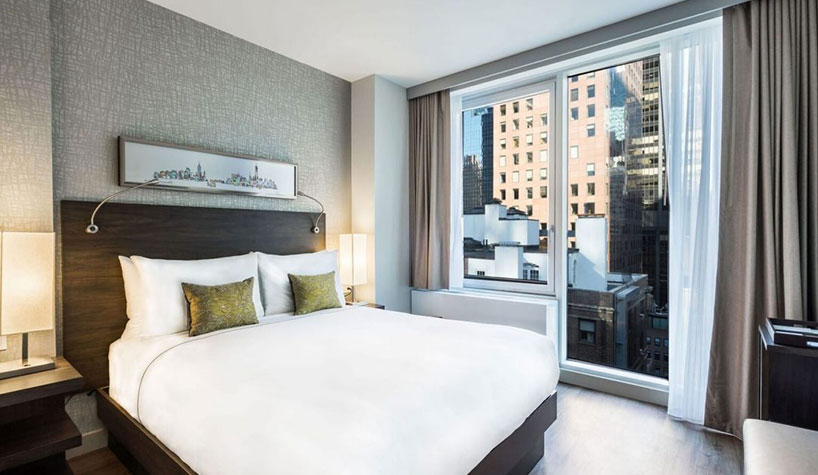 NATIONAL REPORT—Tapestry Collection by Hilton made its New York City debut with the addition of The Bernic Hotel, while two hotels opened in Iowa.

The Bernic’s 96 guestrooms offer a sleek and serene space featuring heated bathroom floors and walk-in rain showers. There are floor-to-ceiling windows in every room and balconies in more than 75% of them. In addition, the property offers a changing collection of images and creations by artist Ian Sklarsky that have become seasonal fixtures. For dining, there’s an onsite restaurant and for cocktails, a rooftop bar.

Hawkeye Hotels opened the doors at the new Holiday Inn Express & Suites at 2012 Iowa Ave. in Marshalltown, IA. This is the first InterContinental Hotels Group property in Marshalltown and surrounding areas. With this newest addition, Hawkeye Hotels now owns and manages 17 hotels in its home state.

The hotel is expected to generate a 20-year economic impact of more than $200 million through consumer spending, taxes, and job creation, according to the company. With 93 guestrooms, the hotel will offer amenities that cater to a business-travel population.

My Place Hotels of America is thrilled to announce the opening of its newest location in Davenport, marking the brand’s fourth location to open in Iowa since August 2017.

Located at 4653 Progress Dr., the three-story, 64-room hotel is accessible to I-74 and I-80. Each extended stay guestroom will feature a My Kitchen, complete with a two-burner cooktop, a microwave, and a full-size refrigerator.

America’s 42nd My Place Hotel is the third of 40 My Place Hotels planned by owners Tom Caruth and Matt Eller. The property is independently managed by Eller Enterprises, who opened their first two My Place Hotels in the Des Moines Metro during Q4 2017.