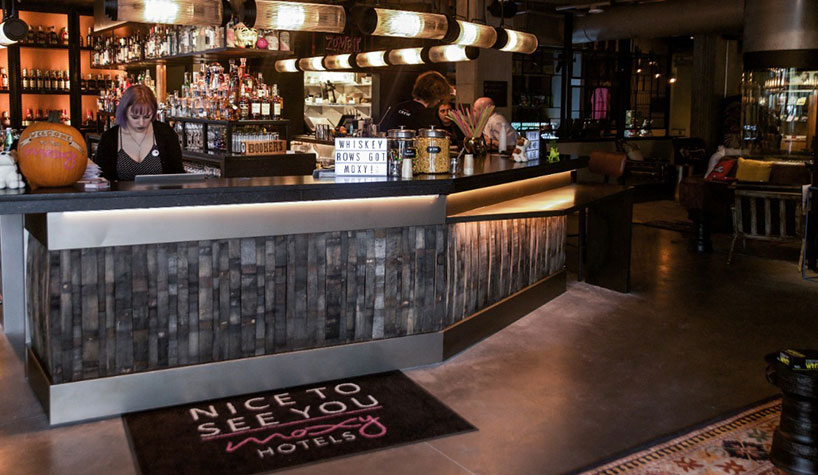 LOUISVILLE, KY—With a thirst for Kentucky’s bourbon culture, two hotels have opened up on the iconic Whiskey Row—Moxy Louisville Downtown and Hotel Distil.

Moxy Hotels, Marriott International’s experiential brand, is ready to disrupt the Derby City hotel experience for the young-at-heart traveler. The boutique-style hotel with the social heart of a hostel offers buzzing social spaces, stylish and affordable guestrooms, co-working spaces, and a 24/7 taco counter. Moxy Louisville Downtown is the 21st Moxy property to open in the U.S. and an ideal fit for Louisville’s authentic personality and burgeoning urban bourbon scene.

Moxy Louisville Downtown was developed by White Lodging, Poe Companies and REI Real Estate Services. White Lodging will manage the hotel and restaurants alongside its other eight hotels in Louisville, including the new Hotel Distil, Repeal Oak-Fired Steakhouse and Bitters End, which also opened today.

Moxy Louisville Downtown offers 110 guestrooms with an industrial-chic style with in-room amenities from plush platform beds to a fun-size work surface, peg walls instead of closets, and floor-to-ceiling windows with many rooms including views of the Ohio River. Every bedroom makes a statement with vibrant art pieces, flexible furniture and thoughtful touches. Always-connected travelers will have access to mobile check-in and checkout, abundant power and USB outlets, and free WiFi.

Hotel Distil incorporates an original 1860s era facade, which was saved following a fire in 2015, and was the original location and barrel house for J.T.S. Brown and Sons—whose name remains prominent above one of the entrances. From the moment guests walk in the door, the homage to bourbon culture is subtle, but clear, as many of the design cues are taken from bourbon barrels and the distilling process, including wood tones, staves, black metal accents and copper fixtures. Other cues are taken from Louisville’s glass-blowing community, including pre-Prohibition-style globe light fixtures and blown-glass flask art pieces.

Guestrooms offer views of the historic Whiskey Row on Main St. The hotel comprises  11 two-room Connoisseur Suites, in addition to 194 rooms with a king bed or two queen beds. The guestrooms have Nespresso coffeemakers, plush robes and custom amenities designed for relaxation.

One of the unique experiences guests can participate in is a celebration of the repeal of Prohibition. Hotel Distil guests will be offered an invitation—via a prescription card at check-in—to join in the hotel’s lobby for a nightly toast at 7:33 p.m., which is 19:33 Universal Time, the year Prohibition was repealed, where they will be treated to a celebratory whiskey cocktail and a tribute to the repeal of Prohibition. Guests of the Connoisseur Suites will also have access to an in-room private bourbon cart where a bourbon ambassador will craft one of 10 premium bourbons neat or one of four Old Fashioned cocktails made with Hotel Distil’s private single-barrel picks.

Hotels in the works in Southern California, Denver New properties for Gaylord, Fairmont and Cambria brands
Radisson Added 84 Hotels Across Asia-Pacific in 2020 SINGAPORE—Radisson Hotel Group overcame significant global challenges in 2020 to expand its portfolio of properties in…
HLS added 10 hotels in ‘21 Company grew by 16% in hotels and 21% in rooms
Choice unveils new Comfort prototype Choice Hotels International Inc. has unveiled the new Comfort Rise & Shine prototype as its flagship,…