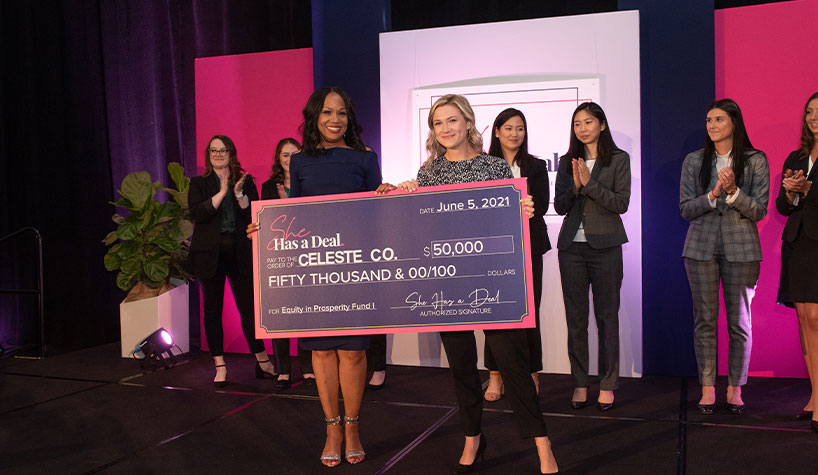 Officials of She Has a Deal (SHaD), a real estate investment platform that creates pathways to hotel ownership and development for women, have revealed the winners of its pitch competition.

Over the last year, participants completed more than 12 hours of intensive hotel investment education to learn how to source, evaluate and raise capital for a real hotel deal.

Five teams were selected at a virtual preliminary round to move forward to the finals, where they pitched live to a judging panel of top-level hotel business executives, entrepreneurs and investors. Held at Hilton’s Innovation Gallery at the Hilton McLean, Virginia, the event also was broadcast on the She Has a Deal website.

The Viewers’ Choice award, voted on by the livestream audience, was given to PEN Investments, comprised of Nadia Cismesia, Polina Shavrina and Emma Toppi from Michigan State University.

Second place, a cash award of $5,000, was awarded to Eden Investment Management, made up of Angel Deng and Kayleen Fan.

The grand prize winner was Celeste Companies, the company name used by individual pitcher Emma Claire Spring. She was awarded $50,000 in deal equity through SHaD Prosperity Fund I, a vehicle for investing in women-led hotel projects.

“I have dreamed of becoming a hotel owner since I was a little girl, and I’m proud to say that dream will now become a reality,” said Spring.

A graduate of Washington State University, Spring pitched a Delta Hotel conversion located in Chantilly, VA. The existing property would undergo a renovation to add meeting space and an American-style casual dining concept. As part of her pitch, Spring went through the process of negotiating key money and identifying a management company with whom she would work.

“I am so incredibly grateful for everything I’ve learned, the people I’ve met and the confidence I’ve gained from this experience,” she said. “This is just the beginning of my hotel ownership experience. I’m excited to see what the future brings and to continue breaking the glass ceiling.”

According to Noah Silverman, global development officer, U.S. & Canada, Marriott International, “It was an incredibly inspiring day. The future of our industry is in good hands, and it’s clear that more and more of those hands will belong to women.”

“I’m so proud of Emma Claire,” said Tracy Prigmore, founder, She Has a Deal. “All of the pitches were extraordinary, and she really put in the work to stand out. For a solo pitcher to win just shows that if you want something badly enough and are willing to work for it, big things can happen.”

She added, “After holding a scaled-back version of the pitch competition last year due to the pandemic, it was thrilling to be able to execute everything we envisioned.”

Applications for the 2022 pitch competition will be accepted starting June 24; the deadline to apply is Sept. 15.