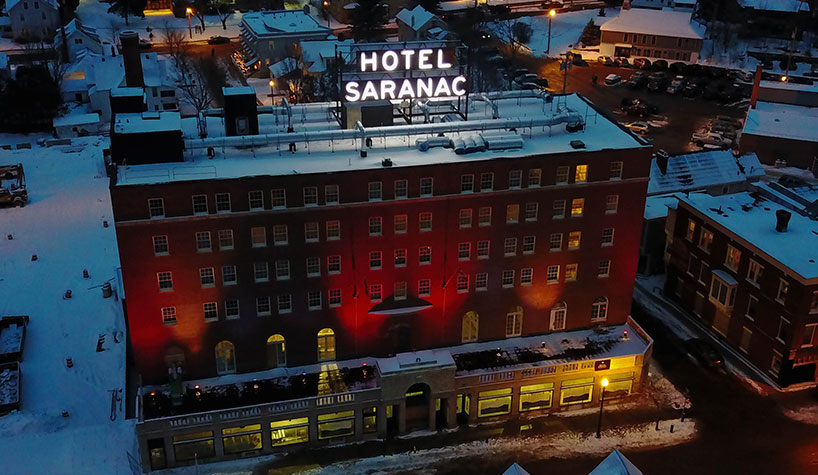 NEW YORK—As a gateway market, New York City tends to get a lot of focus in the hospitality industry. But regions outside the New York metropolitan area are also seeing their fair share of activity.

Hotel Saranac, Curio Collection by Hilton, has officially reopened after a $35-million restoration. Originally designed by Adirondack architects Scopes and Feustmann, Hotel Saranac opened in 1927, and the renovation sought to bring a modern spin to the 20th century landmark.

Now part of the Curio Collection by Hilton, Hotel Saranac was bought in 2013 by New Hampshire-­based Roedel Companies, which took a fully integrated approach with the restoration, including managing its development, construction, interior design and operations. Roedel engaged Boston-­based Korn Design to guide the overall vision and create a brand strategy for the relaunch of the iconic hotel. Governor of New York State Andrew Cuomo also played an instrumental role in bringing the hotel to life, awarding a $5-million redevelopment grant to Hotel Saranac.

The hotel—the sole survivor of 13 properties that dotted Saranac Lake in the 1920s—includes 82 reimagined guestrooms in its main building, and 20 more suites in Compass Point, an adjacent complex that will open later this year. The guestrooms were reimagined with regional heritage in mind. RSJ Associates of Wilton, NH, spearheaded the interior design with the goal of giving the guestrooms a modern touch while still maintaining the feel of the “Great Gatsby”-era of sophistication and elegance. Dark­wood architectural furniture, deep blue rugs, crisp white linens, and rich textures, in color palettes of deep reds and rich oranges are among the design elements. Each guestroom features original, retro-­inspired travel posters specially commissioned for the hotel, incorporating native symbols from the region.

The hotel’s famed Great Hall dominates the second floor with its Palazzo-­inspired design. The Great Hall features an intimate fireplace setting and The Great Hall bar, offering cocktails with nods to the Adirondack as well as speakeasies from the 1920s, a tribute to when the hotel originally opened. The adjacent terrace offers a veranda overlooking Main St.

Resorts World Catskills plans to open the doors of its luxury casino resort to the public for the first time on Feb. 8. The opening comes several weeks ahead of the March 1 opening date under the terms of the casino license, issued by the New York State Gaming Commission.

The Las Vegas-style gaming resort will offer more than 150 live table games and 2,150 state-of-the-art slot machines, as well as amenities and luxury accommodations, all within a 90-mile drive from Manhattan. It is the cornerstone of a $1.2-billion project that will include the casino resort, a planned entertainment village, an indoor waterpark lodge and an 18-hole Rees Jones designed golf course.

The Resorts World Catskills casino resort is expected to provide more than 1,400 jobs to the region.

Trey Scott, SVP with Hunter, said, “The acquisition represented a great opportunity for the buyer to expand their hospitality footprint in New York, while acquiring three Marriott hotels well below replacement costs. The new owners are planning to spend more than $5 million on capital improvements between the three hotels.