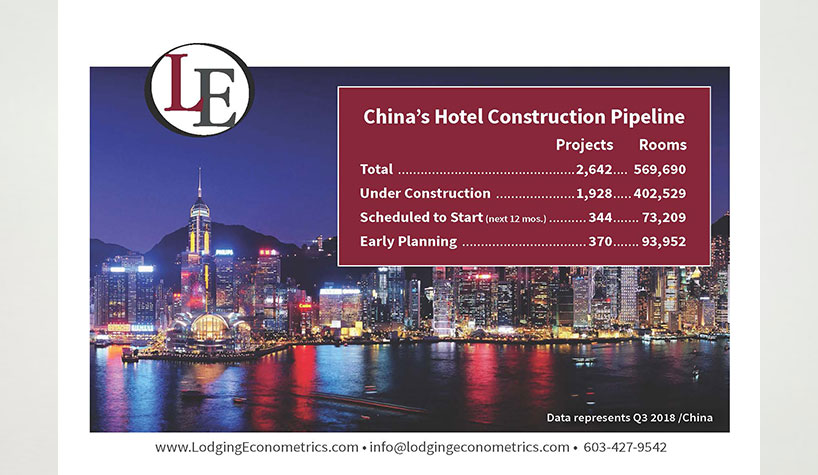 INTERNATIONAL REPORT—In the third quarter of 2018, China’s total construction pipeline stands at 2,642 projects/569,690 rooms and is up 9% by projects and 6% by rooms year-over-year (YOY), according to a report by Lodging Econometrics (LE). Rooms in the construction pipeline are at an all-time high, and the pipeline is a mere 16 projects shy of the cyclical high of 2,658 projects set in the fourth quarter of 2014, the report shows.

Projects presently under construction are at 1,928 projects/402,529 rooms, projects scheduled to start construction in the next 12 months are at 344 projects/73,209 rooms, and projects in the early planning stage are at 370 projects/93,952 rooms. Because of growing tensions about tariffs and near-term concerns about the economy, there is a notable urgency for developers with hotels already in the pipeline to move toward construction at a faster pace.

Although the growth of China’s GDP has slowed in recent years, domestic tourism is still a driving force of China’s economy, which has been growing since 2013. Hotel demand is robust in tourism destinations and economically developed cities such as Beijing, Shanghai, Chengdu and Shenzhen. Hotels in the China pipeline average a very high 215 rooms as the projects in upscale, upper-midscale, and midscale chain scales are at cyclical peaks.

China’s total construction pipeline continues to be led by Shanghai and Guangzhou with 125 projects/24,403 rooms and 113 projects/26,897 rooms, respectively. Guangzhou set an all-time high for rooms in the third quarter. Chengdu follows with 98 projects/21,895 rooms, Suzhou with 82 projects/14,640 rooms, and Hangzhou with 78 projects/17,046 rooms.

Franchise companies topping China’s construction pipeline are led by Hilton, which has reached a new all-time high for the company, with 397 projects/88,689 rooms under development. InterContinental Hotels Group (IHG) is next with 305 projects/71,935 rooms, and then Marriott International with 279 projects/77,087 rooms.