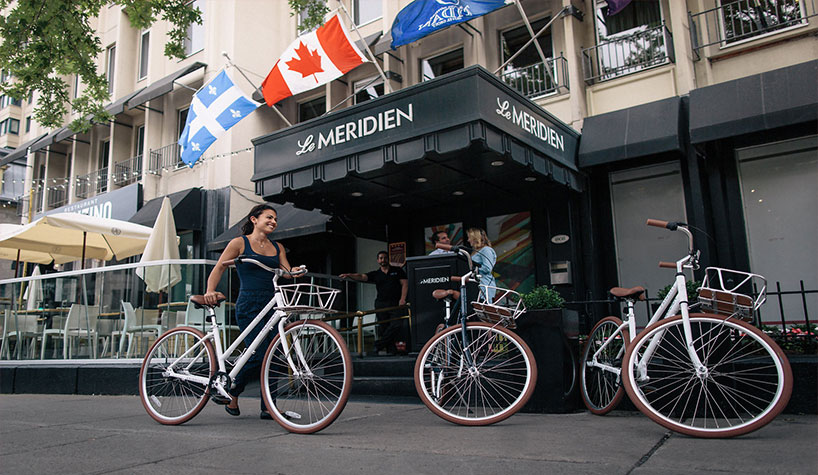 NEW YORK—Many hotels and resorts around the world offer bicycles for guests to use and explore the surroundings. For urban properties, it usually means traveling over paved roads and alleyways, trying to stay in bicycle lanes or just avoiding traffic. For resorts, guests can travel on or off road, with the latter likely providing the most exciting adventures.

Most guests seeking the two-wheel trip are not expert cyclists ready for the Tour de France or a race around an Olympic velodrome. They want a no-frills, easy ride where they can spend more time looking at the scenery or watching the road instead of concentrating on the correct gear.

Priority Bicycles, based here, offers easy-to-ride, easy-to-maintain bicycles whose main features are having just three speeds and a belt drive instead of a chain.

The company got its start because co-founder and CEO Dave Weiner, then the head of a multinational software company, couldn’t figure out a bike he could recommend to his friends. They were all looking for the same thing: a bike that’s good-looking, not overly technical, light, comfy, easy to ride, easy to maintain, hard to steal and affordable.

“Dave and I met in college when we were 19 years old,” said Connor Swegle, CMO and co-founder of Priority Bicycles, which has more than 300 hotel clients worldwide. “Dave has always been a bike guy. After college, he got a job at Giant, which is the world’s largest bike manufacturer, but ended up leaving the industry to pursue a career in software. But the long days of work and traveling were really hard on him and his growing family. He still had a really strong passion for bicycles.”

He continued, “Dave called me up one Sunday and said that he had quit his job. He wanted to get back into the bicycle industry. He said that he wanted to make a bike he can finally recommend to his friends. So I said, ‘Cool. What can I do to help you with that?'”

The two college friends created the prototype for the first Priority bike, The Classic, and offered it on Kickstarter. “We wanted to raise $30,000 to get the bike going, and we ended up raising more than $565,000 on a 30-day campaign and sold more than 1,500 bikes,” said Swegle.

It was on Kickstarter where Priority Bicycles realized their product could be a fit for the hotel industry. “We offered a 10-bike tier, so you could get 10 bikes and a better discount than what we were offering for one bike and you could brand the bike in some way,” noted Swegle. “We were thinking that somebody who had a vacation house might get 10 bikes, or a company that wanted to give them to its employees. All of a sudden, we saw the Viceroy Hotel in Santa Monica, CA, popped and bought the 10-bike tier. We thought that maybe someone was shipping the bikes to work. But we talked to the general manager there and he said he had bikes with chains that had fallen off or had rusted, and had a fleet of 15 bikes, but only three or four at a time would be on the road. He might have even backed the Kickstarter tier out of his own pocket.”

Priority Bicycles prides itself on its low-maintenance bicycle experience. The bikes don’t need routine maintenance or a tune-up every month. They are designed to ride upright and are not too sporty.

“Riders don’t get on the bike and feel it is too aggressive or uncomfortable,” said Swegle. “A lot of bicycle companies add things you don’t need to make the bicycles be more valuable, and sometimes they are using potentially lower quality parts. So, they might have a 21-speed bike, but if you haven’t ridden in four or five years or it’s a new bike to you, you can have that gear confusion and don’t feel safe, and that’s not a great experience. We want to make it really simple—a three-speed bike with just two options on the grip—you get either more resistance or less resistance.”

The company has expanded its offerings to nine models, recently launching The Compass, which is an adventure-grade bicycle.

“The Compass is more of a robust bike and comes with the midstep unisex frame and a higher volume tire, which allows people to ride on roads really comfortably,” said Swegle. “It also has an integrated rack, which allows riders to carry such things as a backpack, a gear bag or a camera. It’s just really great for a hotel or resort to be able to offer a way for guests to really extend that brand experience off the property throughout the whole day on the bicycle.”

Web Exclusive: Vermont Lodging Association launched as industry advocate The COVID-19 pandemic has hit the lodging industry in Vermont hard. The Vermont Lodging Association (VLA)…
The industry goes pink for Breast Cancer Awareness Month Mothers, daughters, sisters and friends, the list goes on—we all know someone affected by breast cancer.…
Hospitality Cares supports industry through pandemic The COVID-19 pandemic has caused unprecedented upheaval in the hospitality industry, with hotels closing their doors…
USTA State of the Travel Industry A Robust Plan for the Future of Travel