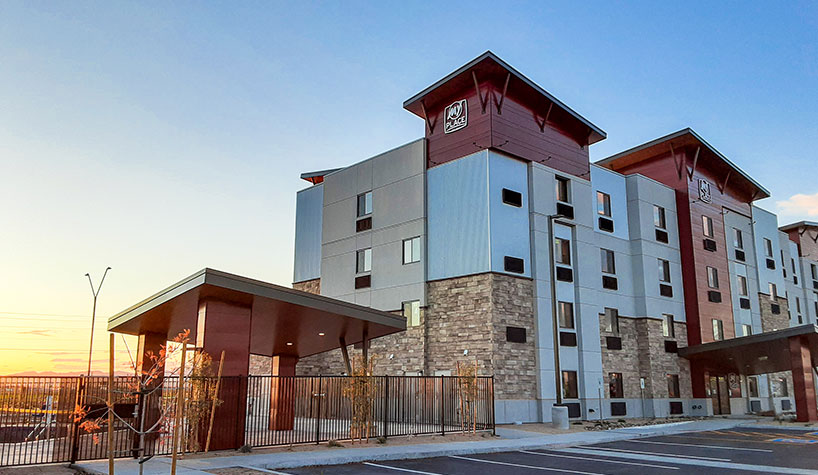 NATIONAL REPORT—Hotels are opening in the South with debuts in Arizona, Louisiana and the Florida Keys. Here’s a closer look:

My Place Hotels Expands in Arizona

My Place Hotels has opened its first property in the Grand Canyon State in West Phoenix/Avondale. The 63-key, four-story hotel, the 55th My Place Hotel, was developed by MP Avondale LLC, built by Haydon Building Corp and is managed by Venerts Hotel Management. My Place Hotel-West Phoenix/Avondale, AZ is located next to the American Sports Centers-Avondale and is close to the Phoenix Raceway, home of the NASCAR Championship Weekend.

Embassy Suites by Hilton has opened a new hotel in Tucson, AZ. Owned by HSL Properties and operated by Prism Hotels & Resorts, the hotel is close to the University of Arizona, theTucson business community and tourist attractions like the Arizona-Sonoran Desert Museum, Sabino Canyon and Park Place Mall. The hotel has 200 of Embassy Suites by Hilton’s upscale two-room suites, as well as a restaurant, indoor and outdoor meeting space, an outdoor pool, a business enter and a fitness center.

Kimpton Hotels & Restaurants has opened Kimpton Hotel Fontenot, a 202-room boutique hotel located in New Orleans’ Central Business District. The opening marks the brand’s return after a 15-year absence from the Crescent City. The property has two signature dining and cocktail concepts and a fitness center.

Kimpton Lands in the Florida Keys

Kimpton Hotels & Restaurants has also opened Winslow’s Bungalows, the first property in the new five-hotel Kimpton Key West collection. This marks the sixth outpost for the boutique hospitality company in the Sunshine State and its first in the Florida Keys. It is the collection’s largest property at 85 rooms.

Following the opening of Winslow’s Bungalows, Ella’s Cottages and Ridley House are the next two hotels slated to open later this spring. Then, Lighthouse Hotel and Fitch Lodge will round out the collection. The design story of Kimpton Key West was brought to life by LA-based Powerstrip Studio.