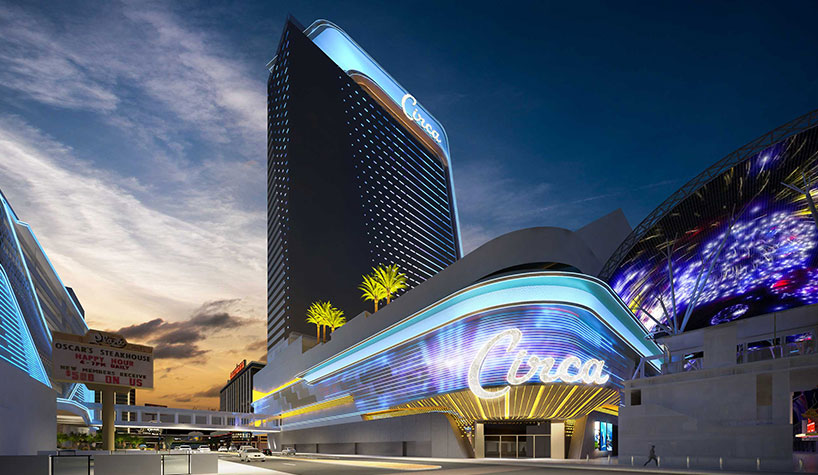 Rendering of Circa Resort & Casino

NATIONAL REPORT—All across the country, hotel companies are planning and developing hotels and resorts. Here’s the latest:

Circa Resort & Casino to Debut in Downtown Las Vegas in 2020
Developers and brothers Derek and Greg Stevens have officially unveiled plans for Circa Resort & Casino, a new integrated gaming resort in Downtown Las Vegas, slated to open in December 2020. An addition to the iconic Fremont Street Experience, Circa will bring a new energy to Downtown as the first ground-up resort development in the area since 1980, according to the resort.

Over the past decade, the Stevens brothers have worked to develop several ventures, including the D Las Vegas, Golden Gate Hotel & Casino and Downtown Las Vegas Events Center.

Paying homage to the city’s vibrant history, Circa will nod to the Las Vegas legends of decades past, ranging from the visionaries behind the first gambling halls on Fremont Street to the destination resorts on the Strip.

The 777-key property will offer a range of eclectic restaurants, the longest outdoor bar on Fremont Street Experience, a rejuvenating spa and a two-level casino with state-of-the-art slot and table gaming options. Circa has collaborated with Steelman Partners to oversee architecture and design, Tré Builders as construction manager, and McCarthy Building Companies Inc. as contractor.

Circa will be home to a state-of-the art parking structure playfully dubbed “Garage Mahal,” specifically designed with ride-sharing in mind. Catering to the growing use of Uber and Lyft, and housing 1,201 parking spaces, the centrally located nine-story garage will be the first of its kind in Downtown Las Vegas, according to the resort.

Another signature element will be a multi-level, stadium-style sportsbook, equipped with the biggest screen in sportsbook history. The Stevens brothers recently announced a partnership with sports gaming media organization Vegas Stats and Information Network (VSiN) to bring an in-house broadcast studio to Circa. This will allow bettors to have in-depth analysis from a roster of experts including broadcasters, industry professionals and athletes.

Construction is currently underway on the 1.25-million-sq.-ft. property. The resort will be defined by a bold design, accented by a backlit roofline and an expansive multi-tiered pool amphitheater. Featuring several pools and a massive screen with the latest high-resolution technology, the amphitheater will offer a watch-party atmosphere for sunseekers and sports fans. The venue will be complemented by a food and beverage menu, private cabanas and music from DJs and special guests.

Circa’s interior will welcome the return of a Las Vegas icon: Vegas Vickie, the kicking cowgirl who was once perched high above the Fremont Street Experience, will become a key design feature.

Epelboim Celebrates Groundbreaking for Hotel in Atlanta
Epelboim and InterContinental Hotels Group (IHG) broke ground last month on a new Even Hotel property in Atlanta. It will open in early 2021 in the Cobb Galleria area.

The new-build hotel continues the expansion of the wellness-focused brand’s footprint in the Southeast. The six-story hotel will consist of 133 rooms, 940 sq. ft. of flexible meeting space, an on-site restaurant and a 1190-sq.-ft. athletic studio. The hotel will also incorporate the brand’s in-room fitness elements and a balance of health-conscious and food and beverage options to help guests maintain their wellness lifestyle while traveling away from home.

The $26-million development of the Even Hotel Atlanta has a franchise agreement executed between Epelboim and IHG, and will be managed by Real Hospitality Group. The lender is Stonehill Capital, who provided a $15.5 million construction loan, which was facilitated by Hart Capital Partners out of Dallas, Texas. The hotel will be in part financed through the EB-5 Visa for investors program and is expected to generate over 235.6 jobs in the city.

“We’re excited to bring our legendary Hard Rock brand of hospitality and entertainment to Bristol, the birth place of country music, just as we have done in other locations all around the world,” said Jim Allen, chairman and CEO, Hard Rock International. “As a brand, we serve more than 120 million guests a year across 75 countries and we are committed to becoming an integral part of the community and driver of jobs and visitation.”

Pestana Hotel Group, the largest international hotel group of Portuguese origin, opened its first hotel in the United States in Miami in 2013, Pestana Miami South Beach. The hotel group’s 100th hotel and first New York City property, Pestana Park Avenue, will be opening in January 2020. This project will be followed by a second hotel on the West side that will be opening during the second quarter of 2020.

Sage Hospitality Breaks Ground on Hotel in Denver’s RiNo Art District
Sage Hospitality, along with Walnut Development Partners and EXDO Development, has broken ground on a new hotel development in Denver’s vibrant River North (RiNo) Art District. This yet-to-be-named independent hotel concept is under development in the epicenter of the RiNo neighborhood at 3770 Walnut St., near the 38th and Blake RTD commuter rail station—directly connecting to Denver International Airport—and in close proximity to the Mission Ballroom and numerous other restaurants, nightlife offerings, fitness studios, and more than one million sq. ft. of new office space.

The seven-story hotel will feature 165 guestrooms that marry coveted residential amenities with the unparalleled service that can only be delivered by a hotel. Rooms will offer a multifunctional lofted bed, pullout sofa and a coffee table/ottoman. All rooms will be equipped with full kitchens, business-friendly features and high-tech entertainment equipment. Each guest floor will feature complimentary laundry services as well as a water filling station that dispenses still, sparkling and hot water. In addition to guestrooms, a 3,600-sq.-ft., four-bedroom historic home on the property, which was originally built in 1890, will be preserved and updated for guests to reserve.

The ground floor of the hotel is slated for a 5,000-sq.-ft. lobby and restaurant as well as a gear locker stocked with bikes, skateboards, scooters, cameras and other items that will all be available for guests to borrow and use as they explore Denver. Amenities will also include package delivery lockers and a guest storage area where repeat guests can leave often-used items. The hotel’s state of the art fitness center will feature a full complement of Peloton bikes, Peloton treadmills, water rowing machines, cross trainers, and free weights.

The rooftop will feature an indoor bar with adjoining outdoor deck, complete with lounge seating and firepits. The rooftop will also be home to an additional 3,300-sq.-ft. deck that will be dedicated to hosting corporate and social events. Rounding out the rooftop offerings will be two jacuzzi tubs and an area of green grass.

Denver-based architecture firm Shears Adkins Rockmore Architects (SA+R) is leading the design of the building. General construction will be led by Katerra Construction LLC and Farrington Construction Management. Guestroom interior design will be led by DLR group. Brand concept and design is being led by Portland-based OMFGCO. Sage and its partners also plan to include a robust art program as well as events programming that will be open to both hotel guests and the public.

This independent brand will join Sage’s portfolio of independent hotels like The Maven, The Crawford and The Oxford. The property is tentatively scheduled to open in early 2021.

The development team has had a long-term presence in Delaware and in hospitality. LNW Hospitality develops, owns, and manages hotel assets on the east coast, with three Marriott brands in its portfolio. Its parent company, Leon N. Weiner & Associates, Inc. (LNWA), has been in Delaware for more than 70 years, with more than 35 years in Middletown itself, through its ownership of Middletown Trace Apartments and Fairfield Commons Apartments.

Axia Hotel Group has been in the hotel business in Delaware since the 1960s and has developed eight hotels in that time. In 2006, Axia brought the first branded hotel to Middletown, with the development of its Hampton Inn & Suites on Sandhill Drive, which was recently renovated.

“Our Hampton has performed well, and we see an opportunity to grow our presence,” said Axia President Tom Kramedas. “We’ve got a great site, partner in LNW Hospitality, and brand in Fairfield by Marriott.”

Middletown, a historic town established in 1861, is a thriving community.  In the last 20 years, the population has more than tripled, while multinational corporations have built large presences in town. The hotel site sits close to the entrance into Middletown from the newly constructed mainline U.S. Route 301, surrounded by numerous dining and entertainment amenities.