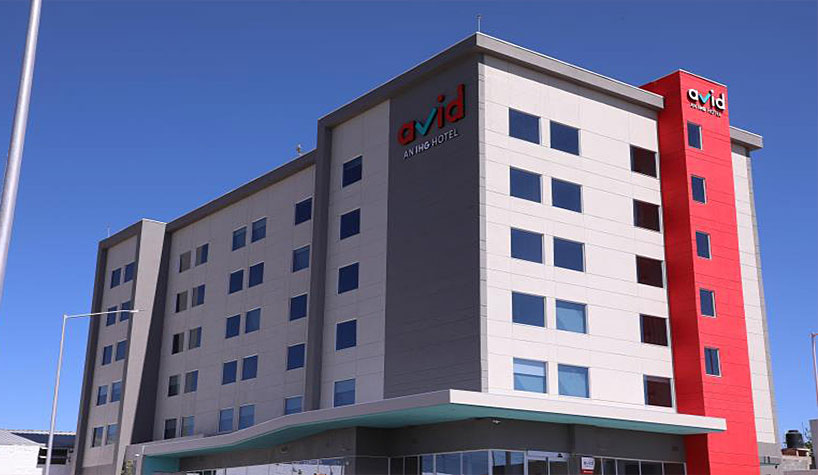 INTERNATIONAL REPORT—This month will see several new hotels in North America making their debut, including one that has already opened in Mexico. The three properties are:

First Avid Hotel in Mexico Opens
Avid Hotel Fresnillo has opened as the IHG  (InterContinental Hotels Group) brand’s first property in Mexico and Latin America, and the first chain hotel to be built in Fresnillo, a key to the economic state of Zacatecas.  It has six floors of new construction with 100 guestrooms and is owned by Operadora MBA and operated by Operadora Uno under a license agreement with IHG.

The Avid Hotel Fresnillo has an open retail-like entry and canopy, and uses the stairwell as an eye-catching red architectural feature; a fitness center near the lobby; and guestrooms with dedicated workspaces and TVs offering IHG Studio, where guests are able to cast entertainment from the smartphone and personal devices.

Canopy by Hilton Tempe Downtown includes a modern aesthetic inspired by the spirit of the Southwest, highlighting the neighborhood’s cultural roots mixed with the emerging city scene, according to the brand. Designed by Scottsdale, AZ-based Allen + Philp, furnishings throughout the hotel are inspired by urban culture, as well as Arizona’s history. A variety of wood and metal tones are incorporated throughout the space to stay true to the nature of the Canopy brand.

Hotel June’s dining and drinking destinations are created in partnership with Steve Livigni of Happy to Serve You Hospitality Group. They include Caravan Swim Club, a two-level, outdoor restaurant and bar, and California-inspired Scenic Route all-day restaurant.