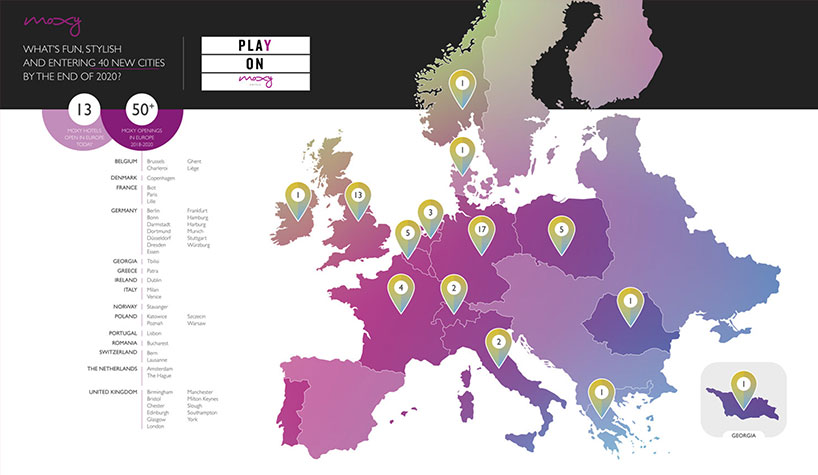 LONDON—Moxy Hotels is advancing its presence with plans to expand into more than 40 new destinations in both fast-growing and established markets in Europe in the next three years.

With more than 50 signed hotels in Moxy’s pipeline expected to open in Europe between now and year-end 2020, the brand is sustaining sharp growth in countries such as Germany and the U.K., as well as making its entry into key European destinations including France, Portugal and the Netherlands.

Moxy accelerated its European footprint in 2017, and expects to continue to grow its robust pipeline over the next three years:

Germany: The German market already has nine Moxy hotels and is set to more than double its portfolio with another 16 properties due to open by the end of 2019 in key cities such as Frankfurt, Munich, Hamburg and Düsseldorf.

U.K.: Following the recent openings of both Moxy London Excel and Moxy London Stratford, the U.K. expects to see the launch of an additional five Moxy hotels by the end of 2018 alone. The brand expects to have all four corners of the country covered, with properties in destinations that fit the brand’s spirit, such as Edinburgh, Glasgow, York and Southampton.

Scandinavia: The recent opening of Moxy Oslo X marks the brand’s entry into Scandinavia and paves the way for future development. Further properties in the pipeline include Copenhagen, Denmark, and Stavanger, Norway.

“Moxy is experiencing tremendous growth momentum driven by owners looking to maximize the value of their assets quickly with adaptive-reuse and conversion opportunities,” said Carlton Ervin, chief development officer at Marriott International, Europe. “Moxy’s flexible design makes it a smart choice for owners, as it easily adapts to a range of development projects, including the transformation of unconventional spaces—a spice warehouse, historical office building or vodka factory, for example—into a stylish, disruptive hotel experience.”

New hotels open in Milwaukee, Phoenix and more U.S. cities Recent openings in the U.S. include the 30th avid hotel, an AC Hotel in Phoenix’s Arizona…
Enter Irvine Marriott’s New Cocktail Lounges—Where Secrets Are Kept IRVINE, CA—The Irvine Marriott has a “secret.” No, it’s not a pivoting bookcase or mysterious occurrence,…
Hotel Projects Shape Up in U.S. Cities NATIONAL REPORT—JW Marriott plants a flag in the Carolinas, a new resort and casino is coming…
Three Hotels Open in Gateway Cities NATIONAL REPORT—This summer, hotels are popping up in gateway cities like Los Angeles, Miami and Boston.…