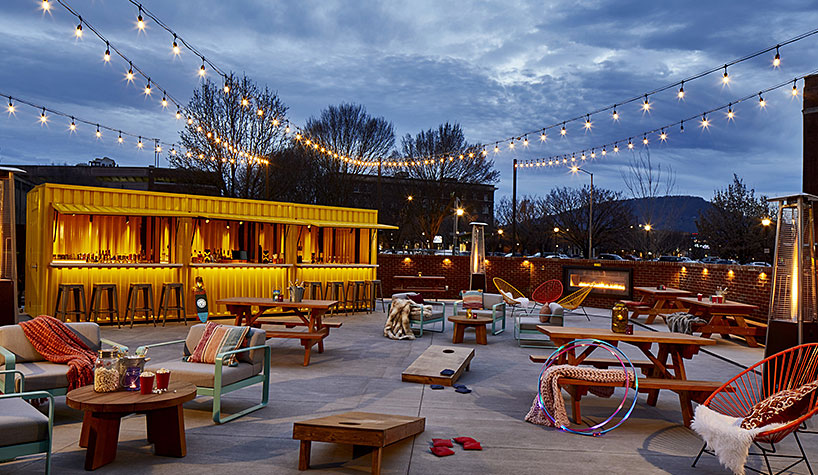 BETHESDA, MD—Moxy Hotels, Marriott International’s experiential hotel brand, is expanding in the Southeastern U.S. with the recent opening of Moxy Chattanooga Downtown in Tennessee and the anticipated openings of Moxy Atlanta Midtown; Moxy Memphis Downtown, Moxy Nashville Vanderbilt at Hillsboro Village, and Moxy Nashville Downtown in Tennessee; and Moxy Louisville in Kentucky. Moxy Chattanooga Downtown was the first to open in November, with the remaining openings expected to follow in 2019.

“Following our first U.S. debut in New Orleans in May 2016, we are excited for Moxy Hotels to expand in the Southeast in vibrant cities that embody the brand’s fun and spirited attitude,” said Vicki Poulos, senior global brand director for Moxy Hotels. “We threw out the hotel rulebook in order to create hotel experiences that will bring out the local flavor and energy of the cities they are in with thoughtful touches and bold programming.”

Moxy Chattanooga Downtown, developed by 3H Group, is centrally located in Chattanooga’s Southside. The four-story, 108-room hotel was designed by Celano Design Studio to highlight the eclectic mix of art, entertainment and people from the Southside neighborhood.

Moxy Atlanta Midtown is slated to debut this month. The 155-room property, developed by Noble Investment Group, was designed by Baskervill for the guestrooms and Streetsense for public spaces. The LEED-certified hotel will have eclectic local artwork sourced by Soho Myriad Art Consulting, including “Welcome Home,” a 54-ft. mural by Atlanta artist Greg Mike. The hotel will also have a rooftop-level pool, cabanas, meeting space and workout facility. The property is dual-branded with AC Hotel Atlanta Midtown, which is also slated to debut this month.

Moxy Memphis Downtown is scheduled to be unveiled in spring 2019. Designed by Manuel Zeitlin Architects and Bounds and Gillespie Architects, the hotel includes 118 guestrooms. The hotel’s exterior will have a modern front porch theme.

Moxy Nashville Vanderbilt at Hillsboro Village, slated to open in Spring 2019, is located a few blocks from Vanderbilt University, Belmont University and Music Row, in a former streetcar suburb of Nashville. Designed by Manuel Zeitlin Architects and Bounds and Gillespie Architects, the six-story property is expected to have a mix of 130 Moxy hotel rooms, 47 residences, a 200-car garage and ground floor.

Moxy Nashville Downtown is expected to debut in May 2019. Designed by Celano Design Studio, the hotel’s public spaces will be inspired by the country rock music style of Nashville.

Moxy Louisville, slated to open in November 2019, is situated in the historic and revitalized Whiskey Row neighborhood of downtown Louisville. The 110-room hotel, developed by White Lodging, Poe Companies and REI Real Estate Services, is designed by HKS Inc. and FlickMars. The hotel will welcome guests with locally inspired contemporary design, industrial chic style and a playful social scene. Moxy Louisville is dual-branded with Hotel Distil, a Marriott Autograph Collection Hotel, which also is targeted to open in November 2019.