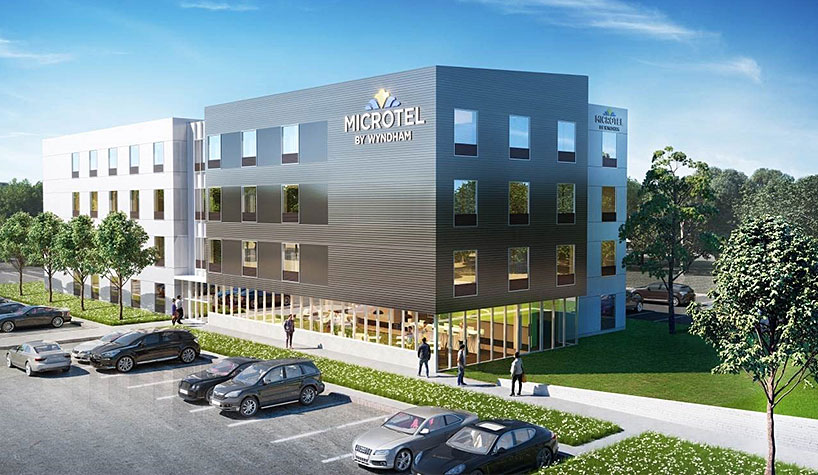 A rendering of Microtel by Wyndham’s new Moda prototype

PARSIPPANY, NJ—Microtel by Wyndham has unveiled its newest prototype, a reimagined interior and exterior concept designed to further elevate the brand, reduce building costs, optimize efficiencies and drive greater returns for developers. The prototype is the first step of Wyndham’s overarching new-construction growth strategy focused on delivering long-term value and quality for owners.

The prototype was first revealed exclusively in the March 7th issue of Hotel Business.

The new prototype, Moda, represents the evolution of the Microtel brand, emphasizing modern efficiency and minimalism for today’s guest and owner, according to the company. The new exterior architecture and interior design elevate the brand’s spaces to match the midscale experience it already delivers—at an even more competitive, efficient cost to build. Moda reduces Microtel’s total footprint by 28% versus the prior prototype. The design also delivers more than 70% of rentable space.

“Microtel is the epitome of efficiency: it outperforms the segment, offers streamlined operations and leads its peers in guest satisfaction,” said Keri Putera, VP of brand operations for Microtel by Wyndham. “As we build on the brand’s existing model, we’ve identified small, purposeful details which can drive large, incremental savings for developers and create a significant impact on the experience for our guests. Moda—a term symbolizing both style and precision—simplifies operations through design while tapping into the growing trend of minimalism, addressing the changing needs of today’s travelers and owners.”

The first hotels leveraging the new prototype are set to break ground in 2019.