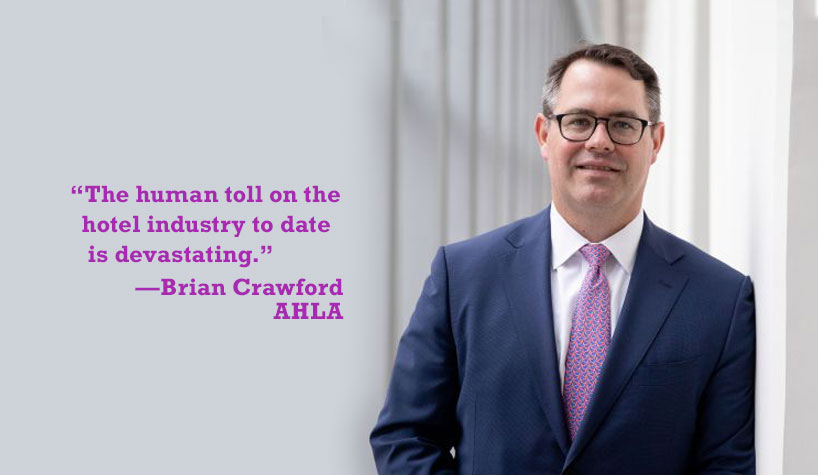 WASHINGTON—In a conference called hosted by the Economic Innovation Group (EIG), based here, executives from the American Hotel & Lodging Association (AHLA), U.S. Travel Association (USTA), International Franchise Association (IFA) and The Hotel Group discussed the changes that need to be made to the Payroll Protection Program (PPP) in order for many hotels to survive the COVID-19 pandemic and beyond.

John Lettieri, president/CEO, EIG, started off by discussing a letter sent to Congress with recommendations on how to improve the PPP so that it meets the needs of small businesses affected by the pandemic.

“After allowing the program to run dry, Congress recently passed another tranche of funding that allows loans to be processed again,” he said. “Nevertheless, this program can run out of money again very quickly, leaving millions of small businesses without even a modest lifeline. To date, much of the attention has surrounded the level of funding Congress provided and the fact that some of the recipients of PPP loans don’t appear to be the ones that need much help, certainly not the help that this program is designed to provide.”

He then outlined what EIG believes should be the primary changes needed to the PPP so that small businesses are provided enough to survive.

“The program should allow for larger borrowing amounts that can be used across the range of necessary operational expenses; longer timelines for rehiring workers when it is safe and appropriate to do so; and stronger guardrails to prevent healthy businesses from accessing this program’s resources,” he said. “PPP is a big first step, but it’s only a first step, and this work is far from over. So, we hope that Congress will move quickly to eliminate funding uncertainty for businesses and improve the program structure to ensure it meets the needs of businesses throughout the duration of this crisis.”

Tori Emerson Barnes, EVP of public affairs and policy, U.S. Travel Association, noted that travel spending is expected to drop more than half a trillion dollars this year due to the pandemic and added, “The PPP was intended to be a short-term measure and really needs structural changes that, in addition to a major infusion of resources, can give businesses and their workers a real chance to survive.”

She continued, “There are many travel businesses with no customers and no revenue that are left out of the PPP altogether. Many nonprofit entities are ineligible for relief under the current structure. That’s a serious oversight because local and regional travel economies are highly dependent on the work of destination marketing organizations (DMO), and many of them are classified as nonprofits. They are economic engines that drive large volumes of visitors and spending into the local economy.”

Matthew Haller, SVP of government relations and public affairs, International Franchise Association (IFA), pointed out that 74% of franchisees responding to an IFA survey said their businesses were shut down, and only about 11% had received PPP funding in the initial tranche. “The program itself needs structural changes to make sure that these loans work effectively for business owners in the hardest-hit sector,” he said.

Brian Crawford, EVP of government affairs, AHLA, took a step back to thank Congress for doing “an incredible job in getting the PPP done and significant liquidity put into the market, especially for the small-business sector.”

He continued, “But, what we’ve seen industry-wide to date is that, according to STR, eight out of every 10 hotel rooms in the U.S. are empty. Our demand has currently dwindled down to the single digits, and about 75% of all hotel employees across the country have been furloughed or laid off. The human toll on the hotel industry to date is devastating. It is catastrophic, and we share the administration and Congress’ goal of getting our workforce rehired as quickly as possible.

“There are real problems and things that need to be changed in terms of the structure of PPP for that to work,” he added. “One of those things is extending the covered period for the PPP loan, which is through June 30. The hotel industry is not going to bounce back quickly and we strongly believe that the covered period should  be extended to the end of the year at the very least, and substantially longer.”

Crawford also explained why a change to the PPP formula of 75% of the loan going toward payroll is needed—because it does not work for the hotel industry.

“For the average hotel, about 40% of your costs is payroll, and 60% is debt services, including your mortgage, state and local real estate taxes, insurance and utilities. Those are all fixed costs you have to pay each month,” he said. “Our industry was hit far before the PPP was even contemplated, so many hotel employees were furloughed way before these loans were passed. But if you’re required to use 75% of the loan on payroll, that’s only allowing 25% of the proceeds to be used for your debt services.”

Doug Dreher, president/CEO of The Hotel Group, provided the 254-room Hilton Garden Inn in downtown Bellevue, WA, as an example of one of his firm’s hotels that has been devastated by the pandemic.

“It’s located in a flourishing city east of Seattle, and home to Microsoft, Amazon and other major companies,” he said. “We were operating in February at peak performance of 80% occupancy, and literally in a matter of days, once the first cases of COVID-19 were reported in the Seattle area, everything started canceling, from groups to sports and conventions. The hotel subsequently went to single-digit occupancy in less than a week back in early March. Today, the independently owned and operated property is sitting at just 2% occupancy.”

He added, “A monthly mortgage on the Hilton Garden Inn is $200,000, and for April, while running 2% occupancy, our total revenue—which pays all bills—was only $20,000, just 10% of the mortgage payment, and that’s just one expense. Clearly, the math doesn’t work.”