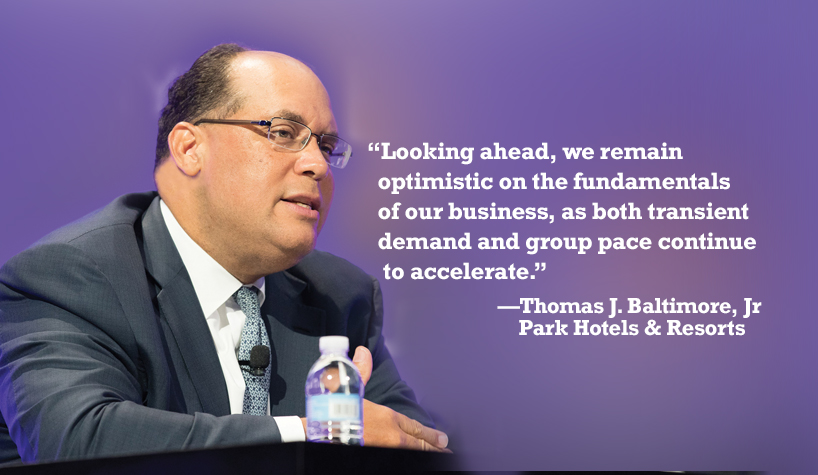 “I am extremely pleased to announce another solid quarter, with RevPAR increasing 2.6%, or 3.2% if you exclude the impact of weather related events and the labor strike in Chicago,” said Thomas J. Baltimore, Jr., chairman/president/CEO,Park Hotels & Resorts Inc. “We continue to make meaningful progress on our internal growth initiatives, with comparable hotel adjusted EBITDA margins improving 10 basis points during the quarter and 60 basis points year-to-date. Looking ahead, we remain optimistic on the fundamentals of our business, as both transient demand and group pace continue to accelerate. Group pace for 2018 is up almost 5%, and 2019 pace is up nearly 12%, further supporting our continued success and confident outlook.”

RevPAR at Park’s top 10 hotels, which account for approximately 65% of third quarter Hotel Adjusted EBITDA, increased 1.7% during the quarter and 3.1% year-to-date, primarily due to an increase in rate, as compared to the same periods in 2017.

The overall increase in comparable RevPAR for both the quarter and year-to-date was primarily a result of increases in group business at Park’s San Francisco hotels and the Hilton Chicago hotel, which also led to an increase in the transient rate. Additionally, Hilton Hawaiian Village Waikiki Beach Resort contributed to the overall RevPAR growth year-to-date as a result of increased group business, partially offset by the disruption from weather related events affecting Hawaii.

The overall increase in comparable RevPAR for both periods was partially offset by a decline in RevPAR at Park’s Orlando hotels attributable to a decrease in transient demand in the market during the third quarter, coupled with challenging year-over-year comparisons related to the significant increase in business in September 2017 from those displaced by Hurricane Irma.

Excluding the redevelopment of the Caribe Hilton, Park invested $30 million in the third quarter (and $108 million year-to-date) on capital improvements at its hotels, including $15 million on improvements made to guestrooms, meeting spaces and other guest-facing areas. Key projects for the quarter included: