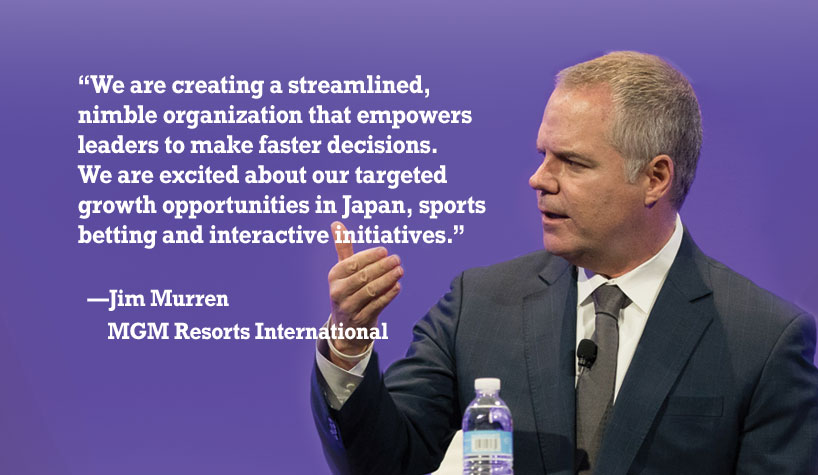 LAS VEGAS—In January, MGM Resorts International revealed its strategic plan—MGM 2020—to further reduce costs, improve efficiencies and position the company for growth, now the company is sharing insight into the progress made in the first quarter.

“The first quarter came in slightly better than our expectations with consolidated net revenues up by 13% and adjusted EBITDA up 5%,” said Jim Murren, chairman and CEO of MGM Resorts International. “Our Las Vegas resorts experienced broad and diversified customer demand. Our non-gaming revenues grew by 4%. We had healthy gaming business outside of baccarat, but previously flagged factors such as a very strong baccarat business in the prior year period and a low win rate in the current period led to flat revenues and a 10% decrease in adjusted property EBITDA year over year.”

Murren continued, “Our regional properties performed exceptionally well with 24% growth in adjusted property EBITDA, or 9% on a same store basis. MGM Grand Detroit, MGM National Harbor and our Mississippi properties had strong quarters. MGM Cotai continued to ramp and contributed to the 26% growth in adjusted property EBITDA at MGM China. During the quarter, we were very pleased to receive the extension to our Macau sub-concession to June 2022. We remain deeply committed to Macau’s continued evolution into an international leisure and tourism destination.”

“We remain focused on achieving our 2020 targets of $3.6 billion to $3.9 billion in consolidated adjusted EBITDA and significant growth in free cash flow,” said Murren. “Our strategy to achieve these goals includes the continued ramping up of MGM Cotai, Park MGM and MGM Springfield, and the implementation of the MGM 2020 Plan. MGM 2020 is a company-wide initiative aimed at leveraging a more centralized organization to maximize profitability and lay the groundwork for the Company’s digital transformation to drive revenue growth. We are creating a streamlined, nimble organization that empowers leaders to make faster decisions. We are excited about our targeted growth opportunities in Japan, sports betting and interactive initiatives. At the same time, we are maintaining a disciplined approach to capital allocation and creating long term value for shareholders.”

“MGM 2020 is our key focus. We have developed a comprehensive roadmap and we expect to deliver on our 2020 plans and operating model transformation. This re-investment into our business is expected to result in Adjusted EBITDA uplift of $300 million in 2021, compared to when we launched the plan, with phase 1 of $200 million in 2020 and phase 2 of $100 million in 2021. We are making good progress,” said Corey Sanders, CFO, MGM Resorts. “We also continue to be focused on fortifying our balance sheet. Earlier this month, we raised $1

billion of senior notes at very attractive rates and used the proceeds to address our near-term maturities. We remain confident in our goal to get our consolidated net leverage to 3-4x by year end 2020.”