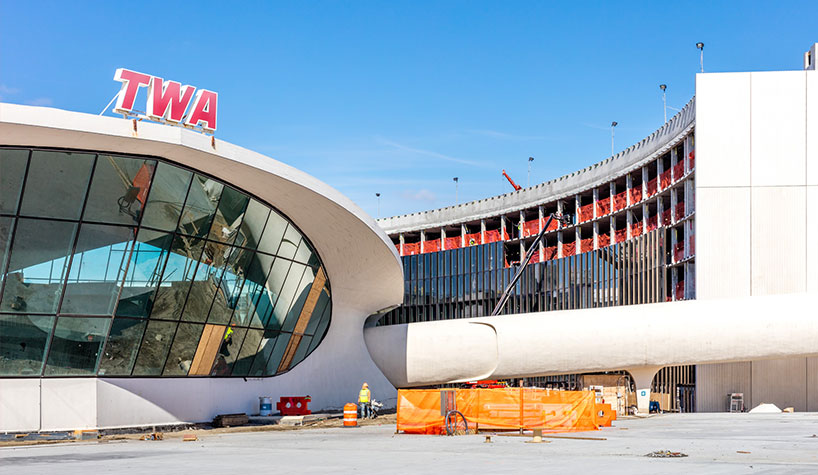 NEW YORK—Opening in May, the TWA Hotel at JFK Airport continues to make headlines. Here’s some of the latest happenings at the landmark property:

A flight attendant’s log detailing five years of airborne adventures. Vintage furniture from the TWA headquarters. In-flight amenities—gilded playing cards, silver serving ware—from a more elegant era. These are just some of the items to be showcased at the TWA Hotel, opening on May 15. The New-York Historical Society—founded in 1804 as New York’s first museum—will curate the exhibitions.

Located within the former TWA terminal—a historic landmark designed by Finnish architect Eero Saarinen and opened in 1962—the exhibits will allow visitors to experience the Jet Age through authentic artifacts, interactive displays and personal narratives.

Over the last two years, MCR/Morse Development has restored Saarinen’s masterpiece, dark since 2001. (Two new buildings behind the terminal house the hotel’s 512 guestrooms.) During that time, more than 2,000 artifacts have been accessioned for exhibition, most of them donated by former TWA employees and their families.

MCR/Morse hired an archivist to catalog each item and partnered with the New-York Historical Society to develop the exhibitions. The team’s research has taken them from Kansas City—home of the TWA Museum—to Yale University’s Saarinen archives, to the Port Authority of New York and New Jersey, which donated original blueprints of the TWA terminal.

The TWA Hotel, John F. Kennedy International Airport’s only on-airport hotel, will have:

The Wright Fit—designer of more than 140 premium health clubs worldwide and operator of 20 facilities in New York City—will manage the 10,000-sq.-ft. fitness center at the landmark 512-room TWA Hotel. CEO Jay Wright designed the gym with his team.

Offering day passes and monthly membership, the fitness center will be free for TWA Hotel guests and open 24/7. You can strike a pose in the yoga studio, secure a personal trainer—or just show up for one of the cycling sessions on the schedule of classes. Afterward, cool down with nutritious, rejuvenating snacks and juices at the on-site galley. Freshen up in the locker rooms outfitted with up to eight showers and fully stocked, salon-style vanities.