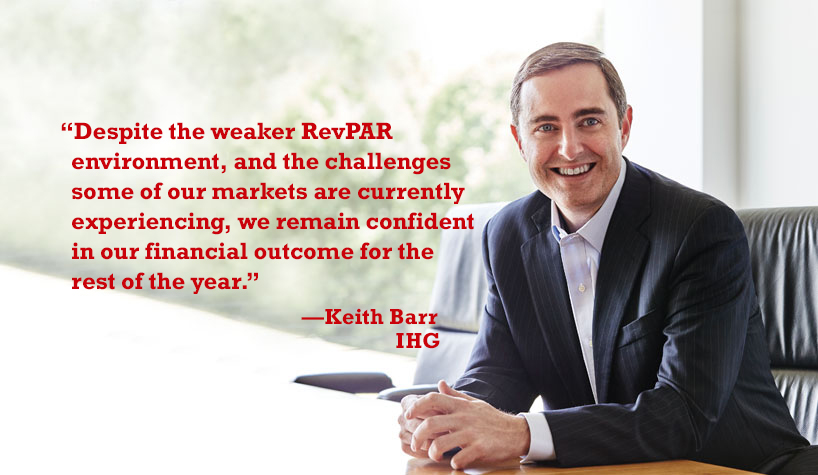 ATLANTA—InterContinental Hotels Group (IHG) has released its 2019 third quarter trading results. The company reported a record high in rooms, but a drop in RevPAR. Among the highlights:

“Our continued strategic focus on driving net rooms growth enabled us to deliver a 4.7% increase in net system size despite a strong comparable,” said Keith Barr, CEO, IHG. “This will accelerate in the coming quarter, and we are on track to deliver industry-leading net system growth over the medium term. Third quarter Group RevPAR was down 0.8%, impacted by tougher trading conditions in the U.S. and China, and ongoing unrest in the Hong Kong SAR.”

RevPAR was down 0.6% in Q3 and flat Q3 YTD. In the U.S., RevPAR was down 0.6% in the third quarter, impacted by renovation activity and lower group business. Q3 YTD performance of flat RevPAR in the U.S. was in line with the segments in which IHG competes. Canada was down 2% due to softness in Ontario and Alberta. Elsewhere in the region, Latin America and the Caribbean were up 6% and Mexico was down 2%.

“Despite the weaker RevPAR environment, and the challenges some of our markets are currently experiencing, we remain confident in our financial outcome for the rest of the year,” Barr said. “Our broad geographical spread combined with the resilience of our asset-light, cash generative model, our disciplined approach to cost management and the continued execution against our strategic initiatives, positions us well for the future.”