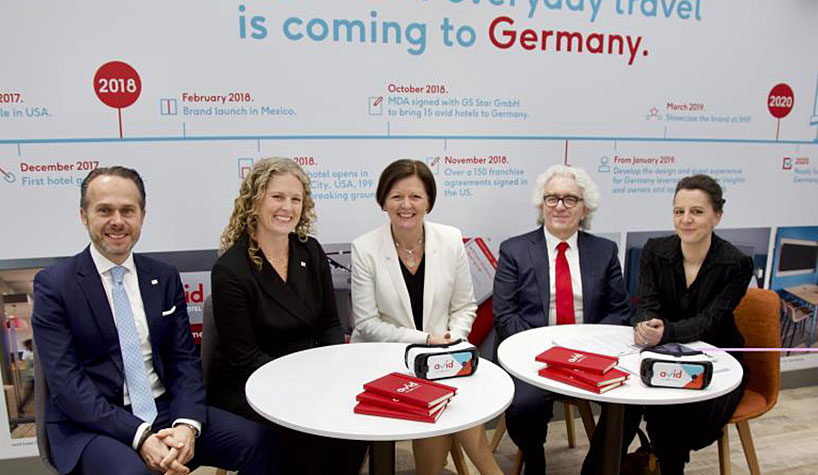 IHG and Sirius Hospitality Holding GmbH have signed an agreement for the first Avid hotel in Germany.

INTERNATIONAL REPORT—Global brands, including those from IHG, Radisson, Hyatt and Magnuson, are making their debuts in cities throughout Europe. Here’s a look.

IHG and Germany-based Sirius Hospitality Holding GmbH have come to an agreement for the first Avid hotel in Germany. Representatives of both companies closed the deal at the International Hotel Investment Forum (IHIF) in Berlin.

The first Avid hotel signed in Germany will be located at Frankfurt Airport, the fourth-largest international airport in Europe and number 14 worldwide. The hotel will be a five-story, new-build hotel with 215 guestrooms and underground parking. Construction is planned to start later this year and the hotel is expected to open in 2021.

Germany is one of five priority markets for IHG after a strong growth momentum since 2015, with 132 hotels already open or in the development pipeline. IHG is now seeking to build further on this hotel growth momentum with the ambition for Avid hotels to become one of their biggest brands in Germany.

The first step in realizing this ambition, according to the company, was the signing of a multiple development agreement (MDA) with existing partner GS Star GmbH (GS Star) at EXPO Real in Munich last October, committing to bring 15 Avid hotels to the German market.

Accommodations, including 184 rooms and 15 suites, are part of seven interconnecting Georgian townhouses. Last year, IHG and Covivio entered an agreement to rebrand and operate 12 hotels (and one pipeline hotel) operating under the Principal and De Vere brands. The Principal Charlotte Square is the second of these properties to rebrand as a Kimpton, following the opening of Kimpton Fitzroy London in October 2018. The opening of the hotel marks IHG’s return to the luxury market in Edinburgh, as the first branded luxury hotel in Scotland in more than a decade. This year will see a continuation of this momentum with additional Kimpton hotel openings in Glasgow and Manchester and an InterContinental Hotels & Resorts opening in Edinburgh.

The property will open following a major capital investment to upgrade and rebrand the existing Radisson Blu property. The hotel will have 311 rooms and suites, a significantly upgraded modern lobby, lounge and open-plan communal areas as well as a restaurant venue.

The Radisson Collection Hotel, Warsaw will be operated by Radisson Hospitality AB under an international management agreement.

Radisson Hospitality AB has signed the Radisson RED Okern Oslo, which will be the first-ever Radisson Red hotel in Norway.

The hotel is set to open its doors in 2021 in one of the most “forward-thinking” buildings in the city. In 2021, Oslo’s most future-oriented building, ‘Økern Portal’, will be complete. This 870,000-sq.-ft. business building will offer everything from flexible office premises to hotel, restaurant and cultural experiences. The property is being built in partnership with the real estate owner, Oslo Pensjonsforsikring AS, and Norlandia Hotel Group.

The Radisson Red Okern Oslo is part of the construction—with 224 guestrooms and suites, several meeting rooms, a restaurant and a rooftop bar. All design choices in the hotel project will be made with the guest experience and sustainability in mind, with the aim of achieving BREAAM-Nor certification, a third-party  sustainability assessment method, which only a handful of all Norwegian hotels have achieved, including the Radisson Blu Atlantic Hotel, Stavanger in Norway.

The Radisson Red Okern Oslo will be operated by Radisson Hospitality under an international franchise agreement.

Both hotels will undergo significant renovations and will be available on Hyatt’s booking system as Hyatt-affiliated hotels beginning in June 2019. The properties, Hesperia Madrid Hotel and Hesperia Barcelona Tower, are scheduled to be fully rebranded by Q4 2019. This will bring the total number of Hyatt-branded hotels in Spain to five, joining Park Hyatt Mallorca, Hyatt Centric Gran Via Madrid and the recently announced Hotel Sofia Barcelona.

Hyatt Regency Hesperia Madrid will be located on the Paseo de la Castellana. The 170-room hotel will be in close proximity to businesses, banks and embassies along with luxury retail shops and historic sites.

Hyatt Regency Barcelona Fira will be a 280-room hotel located on the Avinguda de la Granvia. The hotel has a top-floor bar overlooking Barcelona’s skyline.

The property is the third Andaz branded hotel in Europe. The hotel is located in the Schwabing district, the cultural hub of the city and home to theaters, restaurants and the renowned Englischer Garten.

The hotel has 277 loft-inspired suites and guestrooms with views of the city and the Alps. Every room has been designed with contemporary interpretations of Bavarian traditions. In a collaboration with Andaz Munich Schwabinger Tor, bath amenities in each guestroom were produced by La Bottega and Saskia Diez, a Munich jewelry designer.

The Magnuson Hotel Fines Bayliwick, located in Bracknell, England, has joined the Magnuson family. The property is one of the oldest country hotels in Binfield village. The hotel grounds were part of a walk and hunting area used extensively by James the 1st in the early 17th century when the land was part of Windsor Forest.