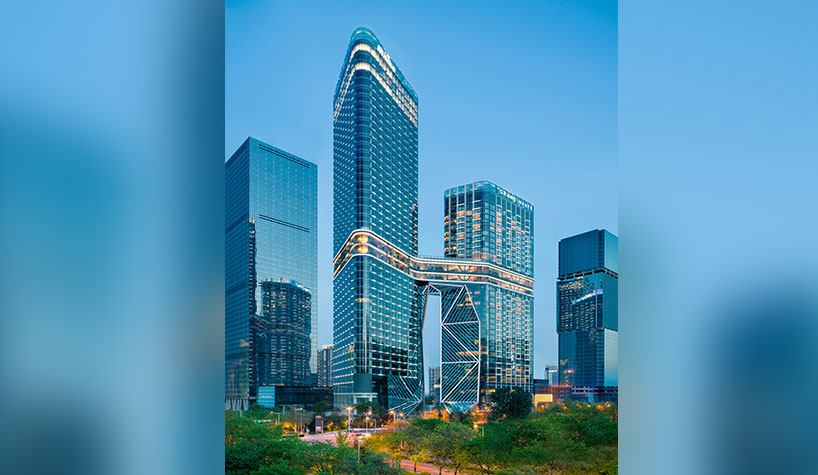 Inspired by a palatial mirage in the desert, the Grand Hyatt Xi’an hotel’s glass tower may appear cutting-edge, but its design is rooted in the history of the Chinese city. Representing the Silk Road, the 396-room hotel connects to an office tower via a Sky Bridge 328 ft. above ground. At ground level, the faceted exterior of the hotel shapes the entrance, comprising a two-story atrium lobby topped with a triangular sloping glass roof. Inside, guests are greeted with design inspired by the desert wildlife, geography and culture of the modern Silk Road.

Standard rooms start at 538 sq. ft. and deluxe rooms start at 807 sq. ft, all with floor-to-ceiling windows. The rooms include light brushed woods and terracotta or crimson accents.

The Hyatt Place Denver/Westminster in Colorado is owned by Denver-based Etkin Johnson and affiliates of White Lodging, and will be managed by White Lodging.

The hotel has 137 guestrooms with separate spaces to sleep, work and play, as well as a Cozy Corner sofa-sleeper.

Grand Hyatt Kochi Bolgatty is the third Grand Hyatt-branded hotel in India. The 264-room luxury hotel is a waterfront urban resort situated in Kochi in the south Indian state of Kerala.

Designed by architects from Wimberly Allison Tong and Goo UK Ltd., the resort is owned by Lulu Group International and is adjacent to the Lulu Bolgatty International Convention Center, the largest in South India.

The hotel has 32,290 sq. ft. of meeting space, including a grand ballroom and smaller residential-style meeting rooms.

A Hyatt affiliate has entered into a management agreement with Little Projects for a Hyatt Centric hotel in Melbourne, Australia.

Slated to open in 2020, the hotel will include 280 guestrooms and suites, a restaurant infused with locally inspired fare and a rooftop bar, featuring handcrafted signature cocktails.

A Hyatt affiliate has entered into a management agreement with PEC Portfolio Springvale Pty Ltd. for a 200-key Hyatt Place hotel in Melbourne, Australia.

It will become the second Hyatt Place hotel in Australia upon its expected opening in 2020. The hotel will be developed by PE Capital, and will form part of a mixed-used complex, which will also include coworking facilities and retail stores.

A Hyatt affiliate has entered into a franchise agreement with LATAM Hotel Corporation for a 138-room Hyatt Centric hotel in San Salvador, El Salvador.