Anyone who has used a PMS (property management system) is likely familiar with the “Tape Chart,” a digital presentation of the status and specific occupancy of guestrooms.

One of my first positions out of hotel school in 1978 was with RockResorts at Caneel Bay in St. John USVI at The Cinnamon Bay Campground. We had a tape chart back then to block specific campsite locations (our rooms) consisting of a large plywood board painted white with the dates written across the top and the tent site locations along the side; we had different colored sticky tape (representing tentative and definite status) that we cut to the appropriate length and there was enough width on the tape to write the guest’s name and phone number (no email back then). As dates and other information changed, we would reposition the lengths of tape on the board as needed to maximize occupancy. (The board fell off the wall once, spraying tacky strips of reservation details all over the floor which took several days to reconstruct!). While this system is archaic by today’s standards, it did have a significant benefit that distinguished it—there was only one system to deal with, and we talked to our customers at every step along the process.

Over time, systems became very advanced including turnkey/self-contained software, as well as apps and independent add-ons that interfaced in various ways, all designed to make the various steps involved in a guest’s stay faster and more efficient. As technology advanced, it was often at a more rapid pace than ownership and management understood; some unfortunate and usually unprepared staffer was assigned the responsibility of coordinating all the software and hardware and eventually the “IT Guy” position was born (next to relief night auditor, possibly the hardest position in the hotel to fill).  This progress came with some baggage however:

The diagram below represents the various IT systems I encountered in 2015 as general manager of a very successful 4-star independent resort; what had been created over time was a mixture of systems that created issues like those mentioned above. The image can be uploaded here. 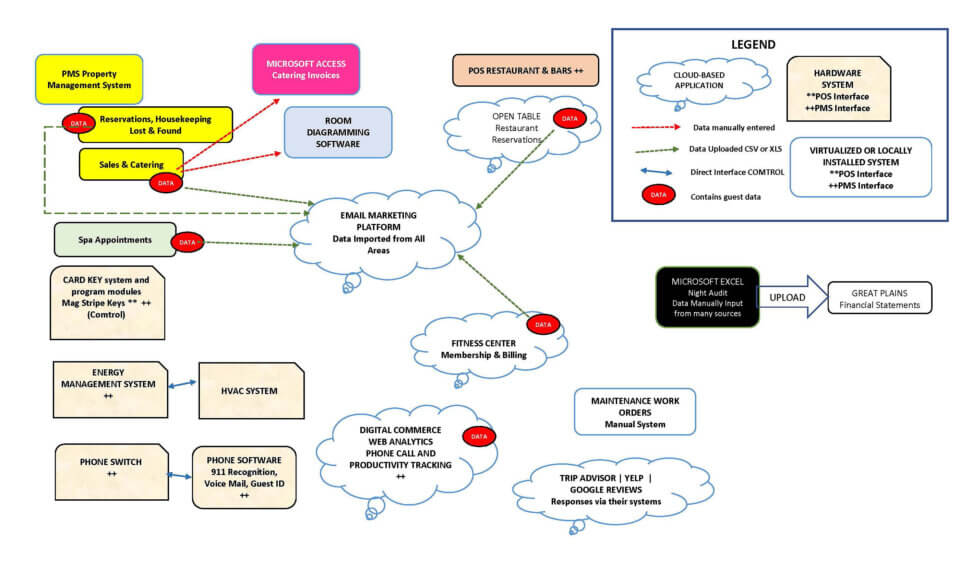 In response to my specific situation, I established the mantra “High Tech to be High Touch” which was the basis for evaluating the issue and making decisions; employees—especially hourly—were consulted to identify what the significant pain points were. The objective was clearly communicated, that the purpose of technology was to allow us to spend MORE interpersonal time with the guests. Point #1 in my advice:

Once all the databases were “scrubbed,” they were transferred into the email marketing or CRM (Customer Relationship Management) platform (like Constant Contact, MailChimp, SalesForce, ACT!, etc.) with common headers and tags noting what marketing group(s) they were associated with so that communication to the entire world of data could be done, or to a very specific subset of guests, like hotel guests who brought a pet dog on their visit. This flexibility allowed numerous successful campaigns to be launched along with specific details about open and read rates, etc.

The point I want to underscore is characterized by American writer Clay Shirky, “It’s not information overload, its filter failure.” Assigning the ongoing data management task to the right person or third party is critical; operational management and in-house creative marketing staff are usually not the right skill set for this type of work. Effectively managing the data can reap significant rewards.

John Lombardo is a certified hotel administrator (CHA) and graduate of Cornell University School of Hotel Administration. He has more than four decades of experience managing hotels, resorts and catering operations.

Pan Pacific London to Offer High-Tech Meetings LONDON—When the Pan Pacific London opens here in early 2021, it will do so with a…
Why Hotels Need to Keep in Touch with Guests During the COVID-19 Crisis—and How… By Callum Short  Even while hotels remain closed to guests during COVID-19 shutdowns, it’s still essential…
Low-Touch Food Ordering Helps Hotels Serve Guests INTERNATIONAL REPORT—With COVID-19 precautions discouraging face-to-face interactions with guests, any technology that makes contactless or low-touch…
Davidson Teams With Knowland; More Tech News NATIONAL REPORT—Davidson Hotels & Resorts, Aimbridge Hospitality and the new Marriott in Tacoma, WA, all recently…