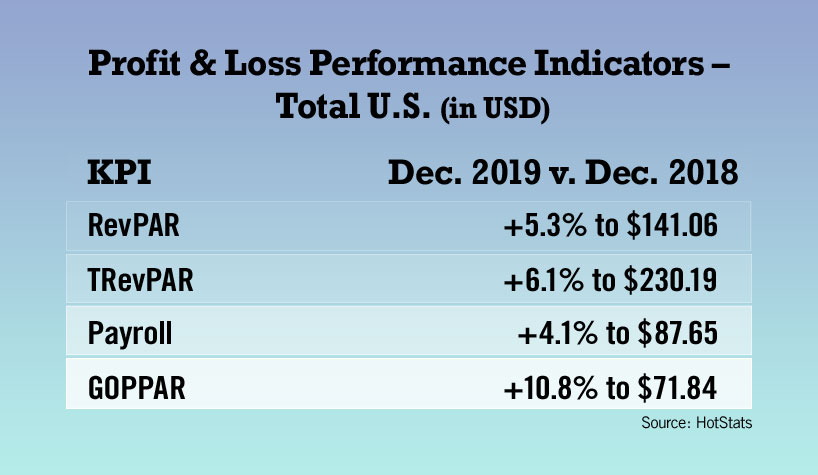 LONDON—U.S. hoteliers made hay in December, as a potential repeat soft performance in 2020 awaits. Across the board, U.S. hotels grew the top line while also carrying it down to the bottom line, according to data from HotStats.

RevPAR was up 5.3% in the month versus the same time last year, boosted by a 2.3% YOY increase in average rate and a 1.9-percentage-point jump in occupancy. For the full year, RevPAR at U.S. hotels was up 0.9% YOY.

Room revenue growth was bolstered by increases in ancillary revenue, which resulted in a 6.1% YOY jump in total revenue.

Hoteliers in December did a strong job of flow through in the face of escalating expenses from the undistributed departments and total payroll, which was up 4.1% YOY, on a per-available-room basis. Total expenses on a per-occupied-room basis were up 2.5% YOY.

The confluence of revenue and expense led to a 10.8% YOY December increase in GOPPAR, which was up 1% for the year versus 2018.

“U.S. hotels finished out 2019 on a strong note, but the overall yearly numbers were flatter, and portend what could be a very similar 2020,” said David Eisen, director of hotel intelligence, Americas, HotStats. “In order to ensure profitability, in the face of expense creep, hoteliers will need to focus their team strategies on profitability, which is a team effort across all operated and undistributed departments.”

On the West Coast, San Francisco’s public drug issues have not proved to dissuade travel to the city, according to the data.

RevPAR grew a healthy 9% YOY, lifted by a 6.2% YOY uptick in rate. RevPAR for the year was up a solid 6.6% over 2018. TRevPAR grew 5.8%, even in the midst of flattish revenue growth from food and beverage operations.

GOPPAR in December grew 31.4%, bolstered by gains in revenue and cost containment. Total hotel labor costs as a percentage of total revenue came down 3.4 percentage points, while expenses across undistributed departments also waned. As example, total A&G expenses came down 4.9% YOY, on a per-available-basis.

Houston in December saw an overall decrease in YOY RevPAR, but hoteliers there were able to eke out a small gain in total revenue that resulted in flat YOY GOPPAR.

RevPAR in the month was down 3.3% YOY, dragged down by declines in both occupancy (down 1.8 percentage points) and average rate (down 0.1%). Total revenue, however, was up 0.8% YOY, driven by gains in the F&B department.

Overall, GOPPAR in December was basically flat—down 0.1% YOY. However, on a per-available-room basis, undistributed expenses were adroitly managed, and came down in the month. This included property & maintenance (down 5.1% YOY, including a 14.3% reduction in utilities) and information & technology (down 9.3% YOY).

GOPPAR for the year in Houston was down 4.3% YOY. Profit margin in December was down 1.5 percentage points to 27%.