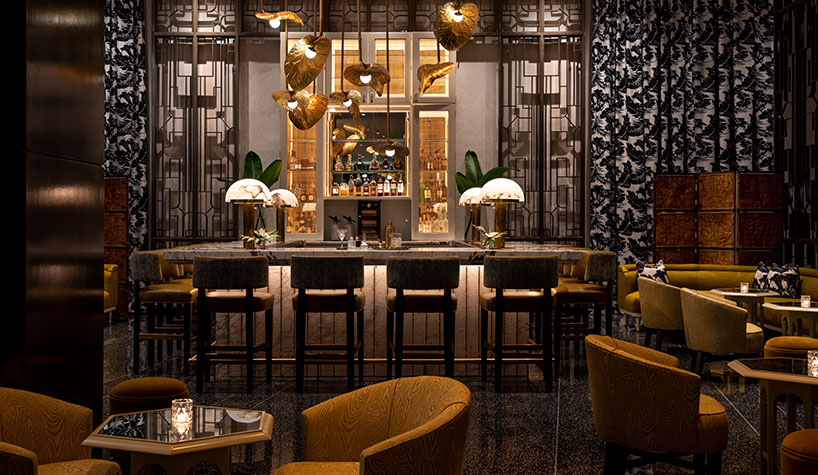 INTERNATIONAL REPORT—In resort locations across the globe, hotels are renovating guestrooms and spaces with modern updates. Here’s a look at these projects in paradise:

The Ritz-Carlton South Beach has reopened its doors following a $90-million, multi-year renovation by owners Flag Luxury Group LLC and Lionstone Group that touched all elements of the property. The hotel was originally imagined by architect Morris Lapidus.

The hotel features a design scheme created by Meg Sharpe, who oversaw the lobby, the Lapidus Bar, restaurant, pool, club and spa, and Cristian Rubio, from HBA, who was charged with reimagining the guestrooms and meeting spaces. Finding inspiration from the natural surroundings, the interiors are warm and inviting, reflecting the serene natural beauty of Miami while celebrating the historic roots of the hotel.

Fontainebleau Miami Beach has debuted the complete redesign of its all oceanfront suite, Sorrento Tower, with guestroom interiors designed by Marzipan Interior Design.

Built in 1948 and named after the coastal Italian town, the Sorrento Tower was once a stand-alone, Art Deco-designed hotel, which was later acquired by Fontainebleau. In its renovation, the suite’s interiors are inspired by the work of hotel designer Gio Ponti—known for his design in the Parco dei Principi hotel on the cliffs of Sorrento. The final product blurs the lines between Art Deco and mid-century modern while incorporating the tranquil colors of the sea.

Complementing the guestrooms is the Sorrento tower’s renovated lobby, designed by Marcy Garcia of MG Design Lab. The design direction for the lobby continues in the spirit of Italian mid-century design and is punctuated by several Gio Ponti-inspired pieces.

Kā‘anapali Beach Hotel has embarked on the “Kealaula” project. Launching this spring, the beginning of the property renaissance is projected at $65 million and will unveil transformative enhancements such as a redesign of the 180-room Kauaʻi Wing, a refresh of the courtyard—including the introduction of additional native Hawaiian plants—the launch of a new oceanfront restaurant, Huihui, and an additional floor of parking.

Originally built in 1964, Kā‘anapali Beach Hotel is set on a three-mile stretch of beach along the western shores of Maui and has 432 guestrooms and a four-acre courtyard.The three elements are slated for completion in Q4 of this year; the Lanai, Maui and Molokai wings will remain available for guests during construction, as will dining outlets Tiki Terrace, Tiki Bar & Grill and the Grab N Go.

Sheraton Maui Resort & Spa, situated on 23 oceanfront acres at Pu‘u Keka‘a (Black Rock) on Ka‘anapali Beach, unveiled a multimillion-dollar transformation of its lobby, including a new open-air lanai, lounge, reception area and The Sandbar lobby bar. The resort also debuted an ohana (family) game room as part of the second phase of the resort’s renovation, following a complete refresh of all guestrooms and suites.

Conceptualized by AHL, formally Architects Hawaii Limited, the 4,223-sq.-ft. open-concept floorplan brings the outdoors in, while emphasizing Sheraton’s brand focus “where the world comes together” by creating a central gathering place for guests to socialize and relax. In July 2018, Sheraton Maui completed a $26.5-million renovation of its 508 guestrooms and suites.

Nearly 20 years since opening its doors, Viceroy Santa Monica has started a $21-million renovation. Under the creative eye of San Francisco-based design firm EDG, the hotel renovation will pay respect to its past while injecting a renewed energy into the hotel’s location, steps from the coastline of Santa Monica, CA.

In the first phase, there will be revamped public common areas with a new arrival experience, lobby, restaurant, outdoor patio and open air indoor-outdoor wraparound bar and adjacent lounge, allowing for a greater sense of place in the beachside community. The phase one remodel of the hotel’s public spaces, in addition to six pilot hotel rooms featuring both beach and urban models, is slated for a June completion. During this remodeling period, Viceroy Santa Monica will remain open for hotel reservations.

Formerly known as the Gran Meliá Hotel, and relaunched as The Resort at Coco Beach, a Hyatt affiliate, Hyatt Regency Grand Reserve Puerto Rico was acquired in 2019 by Monarch Alternative Capital in partnership with Royal Palm Companies and an affiliate of Aimbridge Hospitality LLC. The resort then underwent a multimillion-dollar renovation.

Designed by Boston-based Parker-Torres Design, all 398 guestrooms, suites and Club rooms have been updated with a crisp blue and white palette combined with soft wood tones that echo the island’s pristine beaches and bright waters. San Juan-based 3MG-PR spearheaded the design of the lobby, restaurants and landscaping. Guests will also have access to the newly remodeled Akua Spa opening this month.

The Renaissance Curaçao Resort & Casino has revealed a modern enhancement for the new year following a $12-million investment and a 2019 redesign. The property refreshed the lobby, 223 rooms, on-property casino and Nautilus restaurant. The property partnered with Dash Design, blending elements of the indoors and outdoors, while also tying in the charms and culture of Curaçao.

Mandalay Bay Convention Center to undergo $100M remodel Project expected to be complete by 2024
Four East Coast hotels unveil renovations Newly renovated hotels on the East Coast of the U.S. include two properties in Florida, a…
Hotels debut across the U.S. Recent openings in the U.S. include Hilton properties in New York, Maine and Alabama, as well…
Four hotels open across New York State Recent openings in New York State include a Hyatt Regency within the Resorts World New York…