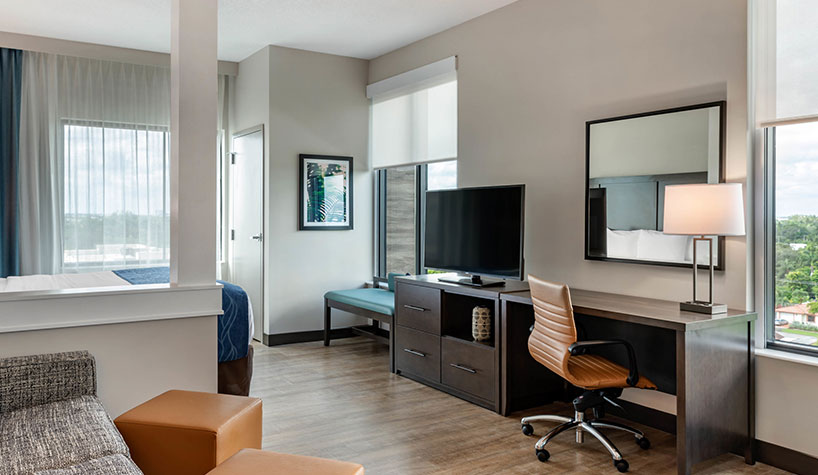 Comfort Continues Florida Expansion With Miami Hotel Opening
Comfort, franchised by Choice Hotels International Inc., opened its second hotel in two months in a major Florida market with the debut of the Comfort Inn & Suites Miami International Airport. This new hotel follows the October opening of the Comfort Inn & Suites in Sarasota, as the brand expands in the state and continues its pace of opening more than one hotel per week nationwide this year.

Situated in Miami Springs, the hotel is located near Miami International Airport, downtown Miami, Miami Beach and the Wynwood Arts and Miami Design districts. In addition to being near many of the city’s top leisure attractions, the hotel’s central location provides business travelers with access to several Fortune 500 corporate headquarters, including Lennar Corporation, World Fuel Services and AutoNation, as well as the regional headquarters of American Airlines, Cisco Systems and Royal Caribbean Cruises.

The newly constructed, eight-story, 120-room Comfort Inn & Suites Miami International Airport was developed by Travelers Hotel Group, which has more than 40 years of experience in the Miami market, including three other hotels near the airport.

Hotel Backed-By LatAm Capital Opens in Orlando, FL
A 101-room La Quinta Inn & Suites by Wyndham opened its doors on International Dr. in Orlando, FL. It is two miles from attractions such as SeaWorld and the Orange County Convention Center.

Riviera Point Invest + Develop is investing close to $40 million in building and designing a dual-brand hotel. The La Quinta Inn & Suites by Wyndham cost $20 million to build and is the first phase of the dual-brand. The second phase will consist of a 98-room Tryp by Wyndham, which is currently under construction, and is expected to cost an additional $20 million to construct. It is expected to open in early 2020.

The new La Quinta Inn & Suites by Wyndham was funded primarily with foreign capital from Latin America. Part of the funding came from private equity funds and EB-5 investors applying for a Green Card.

“Until recently, LatAm investors perceived Orlando as a destination to visit the theme parks and have fun,” said Riviera Point President and CEO Rodrigo Azpurua. “Investors rarely considered investing in large real estate developments in Orlando. But that is rapidly changing. They are beginning to see this city as a more viable destination for their capital, in part, thanks to the tremendous amount of public and private investment being poured into the region to accommodate growth. LatAm investors want to be part of the city’s expansion. In recent years, we have been happily surprised by the positive response we have been getting in Mexico, Colombia, Argentina, Brazil and other LatAm countries when we brought our project to them.”

The Spartanburg, SC-based hotel development and management company acquired the former Best Western Key Ambassador Resort Inn in September 2018, planning to remodel and rebrand the hotel. The property underwent an extensive renovation, including taking all 101 guestrooms and bathrooms down to the studs and rebuilding them.

In addition to guestroom renovations, the project included updates to the hotel’s swimming pool, including the poolside Cheekie Hut bar and grill; the parking lots were resurfaced; a new fitness center was added; and the lobby was completely renovated.

The hotel is close to Key West International Airport as well as many of the island’s feature attractions. The hotel has added a complimentary shuttle to take guests to and from the airport and to many of the island’s top draws, including Mallory Sq., Old Town, the Hemingway House, and Duval St.