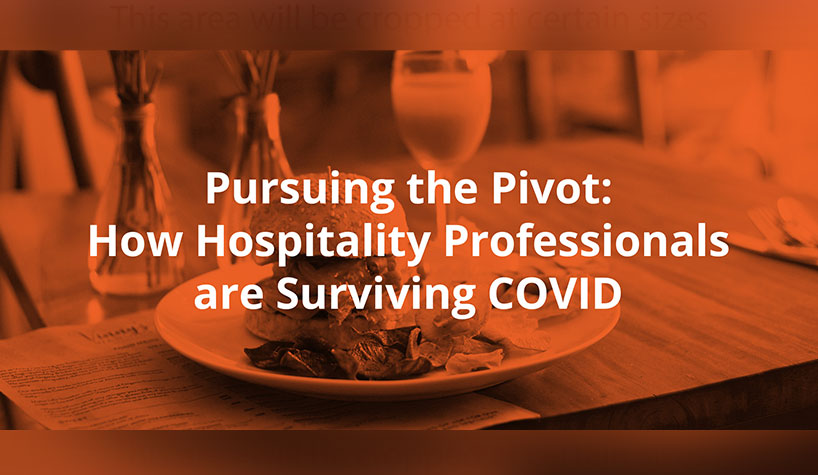 The virtual panel hosted by marlo marketing, “Pursuing the Pivot: How Hospitality Professionals are Surviving COVID,” brought together executives from all aspects of hospitality to discuss what they did to make it out of the worst of the pandemic and head towards what will become the “new normal.”

The session began with the panelists discussing how business was during the height of the pandemic and what their pivot was to help them survive.

“We saw business slow down a bit,” said Levitt, whose company is working on its first product line. “We had a lot of hotels on the docket that we were designing, and those were the first to go. Big revenue streams for us were either on pause or totally canceled. Our biggest goal was how to think about this as a positive opportunity immediately. So, we started taking on things like residential projects—single-family homes, more mixed-use multifamily buildings—and that’s been a fantastic experience.”

Wali, who left Provenance last May and formed his two companies later in the year, said that the pandemic allowed him to take a pause.

“I felt like we were becoming complacent in what we had,” he said. “It felt like we had sort of a rat race going on of outdoing the next guy. It was a great opportunity to not only pivot but to reinvent and rethink. It was a once-in-a-career chance to really rethink what we do and how we do it, and try to be on the wave of 2.0 of how we do business.”

For Nichols’ company, which has a number of Thompson Hotels in its portfolio, along with other properties, it was time to continue its move away from investing in hotels.

“We pivoted to where the opportunities went and away from where they ceased to exist,” he said. “For us, it was a process that started a couple of years ago. If you go back to 2018, 90+% of what we did was acquiring and managing hotels and restaurants. We were starting to get nervous then about being in too small of a lane all the time. So, in 2019, we started restructuring our team and our skill-set and started thinking about other opportunities—more investment in multi-family and mixed-use—because it started to feel a little crowded in the lifestyle boutique hospitality space. In 2020, everything happened all at once and we happened to get there faster.”

He pointed out that the gray space between apartments and multi-family residences and good hotels and restaurants is getting smaller and smaller. “People expect the same level of amenities, interesting programming and services, whether it is an apartment building with a restaurant or a hotel,” he said.

Prensky created Collective Hospitality last year. “I had an endgame in mind when I got into the lifestyle hotel world, which was to figure out the mechanism and see where the weak points were to hopefully be able to create a program that would address those weak points and help the owner-investor move their project ahead smoothly,” he said. “That was my two-year plan; it got rushed up into a year via the pandemic. I created Collective Hospitality, and it has probably been the best place that I’ve sat in the last three years. I have a bunch of really talented people I would not have been able to gather at any other time in history, as they all had jobs with large corporations. There is always opportunity inside a painful situation.”

Harker was forced to shutter his 15-year-old Boston restaurant Eastern Standard, but shifted to an even more popular enterprise.

“Almost three years ago, we thought of a way to extend the Eastern Standard brand,” he said. “We lent the name to an artisan pretzel company. Two years in, we were in about 200 restaurants, bars, beer gardens and tap rooms when the pandemic hit. Almost overnight, we recognized that if we were going to survive, we had to go direct-to-consumer. We took a lot of the longtime Eastern Standard staff, [built] a fulfillment center and went hard on an online presence for the Eastern Standard Provisions brand. While I’ve gone from seven restaurants to one, the online pretzel business turned out to benefit by people being stuck at home. We went from $2 million in 2019 to about $17 million in 2020.”

The conversation turned to the present and the future. What are these executives looking at as they move toward recovery?

“Coming out of the recovery, new hotel development is going to stratify away from the four-star boutique lifestyle,” said Nichols. “We are going to see more of the uber-luxe drive-to resort outside of cities. Those have fared well during COVID, and I don’t think that’s going to change.”

Ponseca, who has relocated to Miami while working on a new restaurant project, has been focusing on the bottom line and steering away from a full-service restaurant to the concept of “fast fancy,” adding, “You order at a counter, but you still have a host bringing you to a table and you have all the bells and whistles that say ‘I am dining outside and no longer eating indoors with my family.’ You still want that, particularly in New York where these restaurants become our living rooms.”

Levitt pointed to the increasing connection to wellness in hospitality spaces. “We might think of wellness as a massage, spa, plunge pool and things that are touchy and interactive. What we’ve been working towards is redefining what wellness is. What are things that are therapeutic? Things like art, music and reading are becoming bigger conversations in all the projects that we are doing.”

Versatility and optionality have been the buzzwords on the projects that he’s worked on—as he put it, ”The idea that people have a choice to go to a hotel or restaurant and have a personal interaction with somebody or not have that and being able to do it all on their phone.”

But Wali believes that hospitality has to be more than a touchless experience, and that the public will quickly forget about not touching one another.

“Once we are all vaccinated, it will take some time to recover from the shock to the system, but ultimately we’ll forget about [sanitation],” he said. “If you take the premise of hospitality—and I use restaurants as part of it—I don’t go to a coffee shop and spend $5 or $6 on a coffee because I want coffee; I go there because I want the experience and the interaction with humans. Technology should be used to remove friction, not to remove humans. So, when I walk up to the front desk, do I really need to give you my credit card and sign all that junk? Take care of that technologically and spend some time engaging with me as a fellow human.”

Can Hotels Mitigate the Liability Risk of Operating During a Pandemic? By Randall Bassett and Drew Bell As states reopen their economies and federal officials debate protection…
Key Considerations for Stakeholders During a Pandemic By Todd Soloway As reports of confirmed coronavirus cases increase, travel bans and mass quarantines go…
Extended-stay finds new life during pandemic; compliance hurdles loom By Pam Knudsen Popular before the pandemic, extended-stays had solidified their place in the lodging sector.…
Buying and Selling Hotels During the Pandemic: Factors to Consider for Hotel… By Dennis Hopper It’s safe to say that the hospitality industry is one of the hardest-hit…