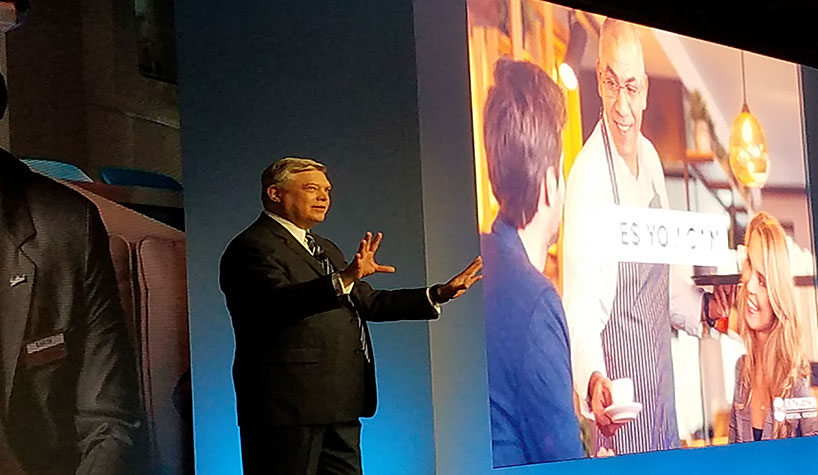 MIAMI—In its first Americas Business Conference since being acquired by Chinese-based Jin Jiang International Holdings Co. Ltd., Radisson leaders discussed some of the integrations that have gone between the two—including the ambitious goal of combining both loyalty programs into one by the summer.

“We have had very intensive discussions since we got together in November last year,” said John M. Kidd, CEO/COO of Radisson Hospitality. “We have had many rounds of very serious meetings on the technological front and with regard to branding and loyalty, in Shanghai, Brussels and Minneapolis. With regard to the partner companies, we have a tremendous communication line already. That has been fostered very much by Jin Jiang. They have been very forward looking as far as that is concerned… There are discussions about hotels we can work together on in different parts of the world, because have definite strengths.”

One of the items they have been working is the loyalty integrations. “On the reward side, we are clearly building together, to create what we have called a global loyalty alliance between Jin Jiang and us, where in fact, you have the 150 million members of Jin Jiang, plus the 22 million that we have on the RHG side,” said Eric De Neef, EVP/global chief commercial officer with Radisson Hotel Group (RHG). “…You can imagine, from system compatibility, it is a huge exercise. So in order to be pragmatic and fast to the market, that is the reason why we have worked together on the global loyalty alliance. We are working on the currency of the points. We are working on some technical details. The idea is to be ready by the summer.”

The process of combining both loyalty programs has been a benefit for the integration of the two companies, according to Kevin Carl, EVP/global chief IT officer with Radisson. “It is a journey and a process, and we will start with low-friction or low-tech means of recognizing those members jointly between the systems, and then work on the deeper technical issues for a road map. The first step of that will lead to the pilots, which Eric mentioned, in June, and then we will go to a further integration later in the year. My view is that currently our collaboration around this topic has led us that this is a long-term, deeper relationship that will continue to put the technical underpinnings in over time.”

The company also revealed that six hotels are set to join its Americas portfolio, which include one Radisson Red and three Radisson Blu hotels.

“Last year at our conference, we shared our plans for expansion and how we will further establish the Radisson Blu and Radisson Red brands in the Americas,” said Kidd, CEO/COO of Radisson Hospitality. “Seeing our vision come to fruition is very rewarding, along with introducing our brands to new markets allowing more guests to experience our exceptional hospitality. Due to the hard work of our development and operations teams, as well as our incredible owners who believe in our brands, we are building a remarkable future for Radisson Hotel Group.”

Radisson Red San Francisco Airport
The new-build hotel will have 130 guestrooms, along with the brand’s restaurant, OUIBar + KTCHN, and a fitness center. The hotel is anticipated to open in Q4 2022.

Radisson Blu Grenada Beach Resort
Radisson Blu is opening its first hotel in the Caribbean, which is a conversion from a Radisson hotel. The hotel will undergo an extensive renovation to become a Radisson Blu. Located on Spice Island just steps away from Grand Anse Beach, the hotel has 229 guestrooms and suites with beachfront rooms. The hotel is planning to re-open as a Radisson Blu in December 2020.

Radisson Plaza Hotel Del Bosque
The hotel will be located in the upscale San Isidro District, which is in the Lima Providence of Peru. The hotel will offer 95 guestrooms and suites. The hotel is planning to open April 2019.

Country Inn & Suites by Radisson, North Little Rock, AR
The hotel, with a planned opening in Q3 2019, is owned by Nupen Patel. This marks Patel’s sixth hotel with Radisson Hotel Group, and his fourth signing with the company in the last 12 months. The hotel will undergo a $3 million renovation to add the brand’s latest Generation 4 design concept, which includes a modern look and feel while providing all the comforts of home. The hotel will have 141 guestrooms and suites.